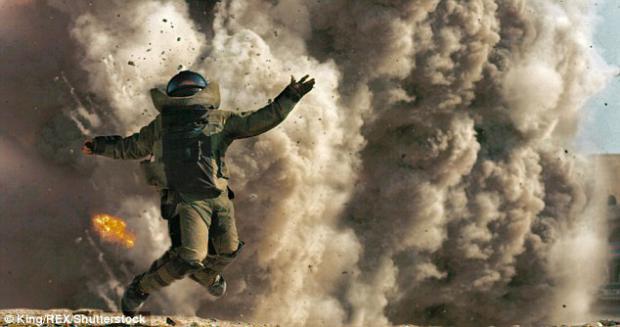 What Trump dismissively called "headaches and a couple of other things…not very serious…no Americans…harmed," the Pentagon admitted otherwise in delayed after-action reports.

After initially saying nothing, then  reporting 11 US military personnel evacuated from Iraq with concussion-like symptoms, the Pentagon raised the number to 34, then 50 and now 64, perhaps a larger number to be revealed ahead.

They're being treated in US military hospitals for traumatic brain injuries (TBI) — from powerful missile blasts.

According to the Mayo Clinic, TBI "usually results from a violent blow or jolt to the head or body."

Loss of consciousness for seconds or minutes

Being dazed, confused or disoriented

Problems with speech, sleeping, or requiring more of it than usual

Dizziness or loss of balance (vertigo)

Tinnitus (ringing in the ears) or hearing loss

Sensitivity to light or sound

Dilation of the pupil of one or both eyes

Fluid emissions from the nose or ears

Weakness and/or numbness in fingers and/or toes

Loss of consciousness or coma in severe cases

Any or a combination of the above symptoms can be short-term or persist much longer — longterm injury called "persistent post-concussive symptoms."

Athletes participating in football, basketball, and other contact sports are vulnerable to traumatic brain injuries — most always publicly called concussions, downplaying them.

Affected players and others experiencing TBI are at greater risk of developing Alzheimer's disease or other forms of dementia later in life.

A 2013 Harvard University study showed the lifespan of former NFL players on average are nearly 20 years shorter than the US average for men overall.

"(P)rofessional football players in both the United States and Canada have life expectancies in the mid-to late-50s,'' Harvard researchers explained.

Professional football, basketball and hockey are combat by other means, players smashing one another and getting smashed, risking significant brain damage.

According to the Mayo Clinic, individuals most vulnerable to TBI include young children, adolescents and young adults aged 15 - 24, adults aged 60 or older, and males of any age, adding:

"(C)omplications can occur immediately or soon after a traumatic brain injury. Severe injuries increase the risk of a greater number and more-severe complications."

TBI can be mild or have serious longterm effects. It's too soon to know the severity of injuries to dozens of hospitalized US military personnel, including those discharged and returned to duty.

The Pentagon called their injuries "mild," what may or may not be true, what most likely won't be reported otherwise if symptoms worsen ahead and persist for some of all US military personnel diagnosed with TBI.

Treatment in US military and VA hospitals is notoriously poor. The American College of Surgeons reported that procedures performed in 16 large military hospitals had higher rates of post-surgery complications than in civilian hospitals — including infections and improperly performed procedures.

According to military doctors and nurses, the problem stems from a culture of secrecy and failure to prioritize patient health and safety.

The poorly run system results in deaths and permanent harm to ill or injured US military personnel.

Annual suits by veterans result in millions of dollars paid by Washington to malpractice victims.

Active duty military personnel are prohibited from suing the government. According to a Congressional Budget Office estimate, if permitted to sue, the amount would be triple the annual payout to victims.

The difference in treatment between civilian and military hospitals is world's apart.

As a US army veteran circa 1950s, I personally experienced poor outpatient VA treatment and learned about more of the same from conversations with Vietnam War vets — ill-treated by the government post-service.

"It has no teeth. Reports are submitted, but patient-safety offices have no authority."

"People rarely talk to each other. It's 'I have my territory, and nobody is going to encroach on my territory.' "

Medical error is one of the leading causes of preventable deaths and injuries in the US medical system overall —especially in military hospitals for active duty personnel and vets.

Victims are consumed by unbearable emotional pain — on active duty and after returning to civilian life, unable to adjust.

Daily stress is bad enough. Combat theater deployments exacerbate it. It's intolerable for many. The little known human cost of war raises disturbing questions. America consumes its own.

Veterans of all US war theaters are vulnerable PTSD and physical injuries.

The toll of war on US military personnel is way underreported and largely concealed.

How many US military personnel deployed to combat theaters return home physically or emotionally scared?

How many stay that way longterm? How many are traumatized from war theater experience?

How many are ill-treated at home when no longer needed to serve US imperial interests?

Many war theater deaths are misreported, little said publicly about them. Many veteran suicides are covered up, slipping under the radar unnoticed.

How many countless thousands of troubled vets are untreated or ill-treated?

How many TBI service personnel from Iraq and other US war theaters will be affected longterm from what they experienced — largely forgotten and ignored when return to civilian life?

According to the Arabic-language Kuwaiti broadsheet Al-Qabas, the Pentagon is downplaying the severity of injuries to US forces in Iraq from retaliatory Iranian missile strikes.

Aside from PTI injuries, the paper claimed at least 16 US military personnel were severely burned and/or sustained shrapnel wounds, taken to a Pentagon hospital in Kuwait for surgical treatment — currently in ICU for observation.

Although Iran's retaliatory missile strikes on US bases in Iraq tried to avoid casualties, "tens of US troops have likely been killed and wounded and were transferred to Israel and Jordan on 9 sorties of C-130 flights," adding:

Had the IRGC intended to cause mass casualties, thousands of US military personnel could have been killed and injured.