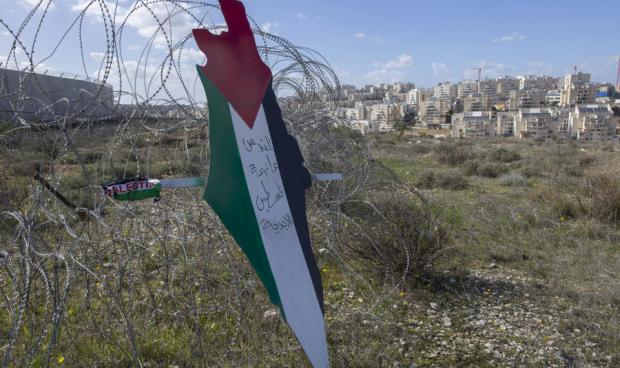 Longstanding Palestinian Collaborator Abbas Cutting All Ties to US and Israel?

More stooge than statesman, he says what Palestinians want to hear while back-stabbing them through betrayal – subverting their liberating struggle, not pursuing it.

As long as he's subservient to Israeli interests, he'll keep his post, free to accumulate more super-wealth he amassed and stashed offshore, likely in tax havens.

Leaked US diplomatic cables quoting a senior Israeli official confirmed that he knew about the 2008-09 Cast Lead war on Gaza in advance — likely the 2012 Pillar of Cloud and 2014 Protective Shied aggression as well.

"I witnessed (Abbas) at his best. In Operation Cast Lead, (he) called us personally, applied pressure, and demanded that we topple Hamas and remove it from power."

Hamas spokesman Sami Abu Zuhri said this revelation "reaffirm(ed) the fact that Mahmoud Abbas is no longer fit to represent our people, who conspired against his people during a war."

He was never fit to serve, why Israel and Washington installed him as president, using him as a convenient stooge for their interests.

Serving as Israel's enforcer against his own people, he supports division, not unity, the US/Israeli divide and control strategy.

Each time discussions were held on unity between Hamas and the PA, Abbas undermined the possibility in collaboration with his Israeli master.

His addresses ring hollow when delivered. Numerous times at the General Assembly he pretended to serve long-suffering Palestinians while betraying them.

Calling for peace, an independent Palestinian state, and an end to colonial occupation ignored his longstanding failure to back rhetoric with responsible actions – just the opposite.

Instead of challenging occupation harshness and Gaza's blockade, he supports what he claims to oppose.

Time and again, he threatened to suspend political and security ties with Israel until it recognizes Palestinian statehood within pre-June 1967 borders, but never followed through — proving he's the enemy of the Palestinian people, not their ally, a Judas-goat, not a legitimate leader.

In 1993, he was part of the Palestinian negotiating team that capitulated to Israel in Oslo.

Time and again for over a generation, he proved himself a loyal Israeli servant — why he managed to keep his job so long.

If turns on his Jewish state master, he's easily disposable like Yasser Arafat, poisoned to death by Israel for being uncooperative.

Ignore what he says. Follow only what he does or doesn't do.

On Saturday during an Arab League session in Cairo that was convened to discuss Trump's annexation scheme of the century, he was at it again — new date and venue, similar hollow rhetoric.

Once again he threatened to cut all ties with the US and Israel, including enforcer services for the Jewish state, saying:

"We've informed the Israeli side...that there will be no relations at all with them and the United States including security ties" — reiterating a "complete" rejection of Trump's annexation scheme.

A pro-forma communique following the session affirmed (hollow) Arab League rejection of Trump's scheme and support for a Palestinian state within pre-June 1967 borders — what's been unattainable for over half a century.

With Israel controlling over 70% of West Bank land and the entire city of Jerusalem, achieving that goal is further out of reach than ever before.

It's only possible through longterm unified Palestinian struggle on their own or under new leadership, free from pro-Israel PA constraints.

Abbas' rhetoric rings hollow whenever expressing support for Palestinian rights he abandoned in the early 1990s and never looked back.

None of his promises are credible, nothing believable. His duplicitous record speaks for itself.

A previous article explained how Palestinians can override US Security Council veto power by  invoking General Assembly Uniting for Peace Resolution 377 (1950) when SC members fail to act as required to maintain international peace and security.

Through this mechanism, Palestinian statehood and rejection of Trump's annexation scheme can be affirmed by a super-majority of UN member states.

Yet Abbas never chose this doable way to achieve world body support for Palestinian rights unattainable any other way — proving time and again that he's a self-serving Israeli stooge.

Will an official Arab League position state this? Will it condemn the Trump/Netanyahu scheme or merely call for dialogue between Palestinians and Israel to resolve differences?

The latter option is unconditional surrender to US/Israeli interests in less than so many words — how UN secretary general Guterres operates, the same true for most of his predecessors.

Palestinians are between a rock and a hard place, alone on their own with no reliable allies, most Arab states supporting US/Israeli interests and their own.

Like the lyrics to a popular 1960s song, Abbas will never again have political and security ties to Israel and the US — at least not until tomorrow.