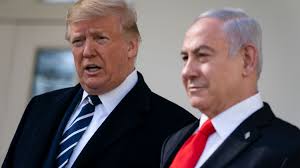 Like his father-in-law Trump, slum lord Kushner is a racist geopolitical know-nothing.

Both figures are orthodox Jews with no geopolitical background. One-sidedly biased for Israel, they were manipulated and fed material by the Netanyahu regime to include in the annexation scheme.

It's a diktat, not a "vision," excluding Palestinian input, denying their fundamental rights.

Its bottom line is unconditional Palestinian surrender to Israeli demands, the illusion of Palestinian statehood, no real one permitted.

Unacceptable provisions of the scheme assure perpetual conflict and instability in the Territories under Israeli apartheid control.

Kushner denigrated Palestinians earlier as inferior to Jews. Asked if they should or could expect freedom from Israeli occupation, he said "I think that it's a high bar."

Claiming they're not ready for self-rule, a bald-faced Big Lie, he said maybe "over time (they'll) become capable of governing."

One-sided support for Israel, imperial arrogance, and contempt for Palestinian rights define the Trump/Netanyahu annexation scheme of the century — what only tyrannical rulers could love, their exploited subjects having no say over how they're controlled and abused.

"While the Oslo Accords sacrificed human rights and the international law for more than a quarter of a century, (Trump's) Middle East (scheme) constitutes a full destruction of international law, and legitimizes more than 50 years of Israeli violations of international humanitarian law (IHL) in the (Occupied Territories) since 1967, that amount to war crimes and crimes against humanity," said PCHR, adding:

The scheme "legitimizes" Israeli apartheid control over all aspects of Palestinian life, ignoring Jewish state high crimes of war and against humanity.

The Adalah Legal Center for Arab Minority Rights in Israel was just as damning, saying:

The Trump/Netanyahu scheme "gives a green light to Israel's illegal annexation of West Bank" and Jerusalem, including control maintained over besieged Gaza.

It's a "joint US-Israel effort to impose the Israeli government's vision for (Occupied Palestine in flagrant violation of) international law, and Palestinian right to self-determination."

It permits further Israeli annexation of historic Palestinian land, "call(ing) for the forced transfer of 260,000 Palestinian citizens of Israel." More on this below.

It's a harsher version of South African apartheid. Instead of statehood, it calls for "enclaves under Israel's permanent military effective control."

"All basic pillars of self-determination – including control of border crossings, air space, the sea, territorial integrity and full sovereignty – are denied in order to create" isolated Palestinian cantons.

The scheme is "a racially-motivated form of demographic engineering…negat(ing) the right of return for Palestinian refugees."

It "proposes the forced transfer of over 260,000 Palestinian Arab citizens of Israel living in 10 towns in the Triangle region in the center of the country to a future enclave of Palestine."

They or their descendants would no longer be Israeli citizens, facilitating a greater Jewish demographic advantage.

For the first time since Israel's 1948 creation, the US proposed shifting Arab citizens of the Jewish state outside its borders.

Adalah denounced the illegal move, calling it "a racially-motivated" scheme to "strip" Israeli Arabs of their "citizenship" status and rights — in flagrant violation of Fourth Geneva and other international laws, including Security Council resolutions and international tribunal rulings.

The Trump/Netanyahu scheme is a declaration of war on long-suffering Palestinians and the rule of law.

How much more Palestinian bloodshed is likely ahead? How much greater Palestinian suffering?

What greater proof of the scourge of Zionist tyranny is needed?

It rejects democratic values and the rule of law, blaming victims for crimes committed against them, harming Jews and non-Jews alike.

It's tyranny by another name, a monster threatening everyone, a force for pure evil, not good.

A curse for Palestinians for over a century, its aim is entirely Judaizing land Israel wants exclusively for Jews.

It's a scourge demanding universal opposition until consigned to the trash bin of history forever.

"Greater Israel": The Zionist Plan for the Middle East