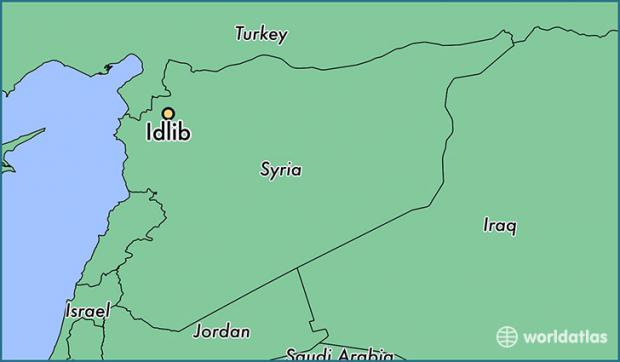 It's the last remaining stronghold of anti-Syrian terrorists, heavily armed with Western and Israeli weapons — many thousands supported by the US, NATO, Israel, the Saudis, and Turkey.

Eliminating them and foreign occupation is essential to preserve and protect Syrian sovereignty and territorial integrity.

A key "priority task is fighting against terrorism in Syria, where Idlib and hostages kept there remain terrorists' last stronghold."

US/Turkish supported jihadists "do not observe the cessation of hostilities…violat(ing) it daily."

"The target of their attacks and of fire from various sorts of weaponry is the Syrian army, civil facilities (residential areas, hospitals, etc.), and the Russian air base in Khmeimim."

"By all means, such armed provocations cannot be left unanswered."

"Those signals are very alarming," said Nebenzia. "We know too well how those stagings are used for (US-led NATO) military and political goals."

Since December, Syrian forces have advanced in Idlib, liberating many towns and villages, greatly aided by Russian airpower.

They "will not stop until the elimination of those terrorists, who threaten safety and security of Syrian civilians" — until Idlib and other jihadist controlled areas are liberated, including in Aleppo province and elsewhere.

His regime "will not shy away from doing whatever is necessary, including using military force" to counter Syrian forces.

According to Turkey's war ministry, four of its troops were killed, others wounded in Idlib over the weekend, adding:

In September 2018, Putin and Erdogan agreed on establishing a 15 – 20 km-wide demilitarized zone in Idlib along the Turkish border.

According to Russia's reconciliation center in Syria, up to 60 jihadist attacks occur daily, supported by the US, NATO and Turkey.

Ceasefires and dialogue proved futile, force the only viable option, why the Syrian offensive supported by Russian airpower was launched weeks earlier.

"Ankara demands the Syrian Army to halt (its) military operation against al-Qaeda-linked groups in the region because these al-Qaeda groups are deeply linked to Turkish proxies operating there" — against the Syrian Arab Republic.

Reportedly, US/Turkish supported jihadists "receiv(ed) fresh shipments of ATGMs, including US-made" TOW anti-tank missiles, able to penetrate armor when fired from up to 3,000 meters from targets.

"I wish Allah's mercy on our four soldiers who were martyred in Idlib in the regime forces' attack, condolences to their families and quick recovery to the wounded."

"This attack on the Idlib agreement was immediately retaliated" — no further elaboration given.

Along with the US, NATO, Israel, and the Saudis, Turkey is a major obstacle to restoring peace and stability in Syria.

Achieving it requires defeating jihadists they support and ending foreign occupation of Syrian territory — miles to go remaining to achieve these objectives.