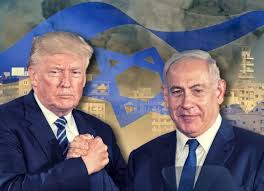 In cahoots with Israel, Trump's no-peace, no-equity, no-justice scheme was drafted based on Jewish state input to be rejected, not accepted by long-suffering Palestinians.

Its aim is endless conflict, instability, chaos, and a separate-and-unequal mentality in the Occupied Territories, Israeli Arab communities, and throughout the region.

The US, other Western countries, and Israel are white male supremacist societies, non-Judeo-Christians and people of color considered inferior.

Gender inequity is rife. So is violence against women. Critics call the US a rape culture, a fourth of adult women victimized one or more times in their lifetime, usually by someone they know, including family members.

The US is also a violent society, three-fourths of women victimized by domestic violence in their lifetimes, their leading cause of injury.

Sexual abuse is rampant in Israel, including harassment, inappropriate touching, and rape, most often without legal recourse.

Abused Israeli women are either too humiliated to come forward, aren't believed when they do, or are criticized by authorities complained to, dismissing accusations as frivolous, one of the hallmarks of male supremacist societies.

The Times of Israel reported that 90% of female Knesset members reported being sexually harassed or abused, 40% of Israeli women overall aged 16 - 48.

Like the US, Israel is a violent culture — children, adolescents, and youths taught to hate Arabs from pre-school to higher education, military service mandatory for both genders.

The worst of what goes on in the West and Israel is unreported by establishment media — Trump's no-peace apartheid scheme misreported.

It's part and parcel of cultural violence that defines US, other Western, and Israeli societies.

"You can have your own state on 13% of 42% of a third of historic Palestine as long as you agree to share it with us equitably."

Images show Jews only freeways, Netanyahu with rat-like facial features, rats chomping on the cheese, and other images taking strong issue with a scheme only tyrants could love.

The scheme is "a declaration of war against Palestinians rights and a legitimization of Israeli settler colonialism and apartheid" — a diktat, not a deal, "sounding the death knell to the two-state solution" the US and Israel long ago rejected.

For Israel, it fulfills its wish list. For Palestinians, it's hardened dirty business as usual. For hundreds of thousands of Israeli Arab citizens, it's loss of their citizenship.

Jewish Voices for Peace (JVFP) called the scheme "a farce with deadly consequences."

"This is in no way a peace plan. It's an apartheid plan."

"It's a distraction ploy by two warmongerers who are prioritizing their personal election campaigns over any semblance of statecraft."

"International law, global consensus and decades of US policy concur that Palestinian land isn't for Trump to give away nor for Netanyahu to steal."

"The only way forward towards lasting peace for Israelis and Palestinians is through justice, freedom and equality for everyone."

The Stop the Wall Campaign slammed the Trump/Netanyahu scheme, calling it the "theft of the century."

The scheme "represents an assault on both the Palestinian people's rights and the entire human rights framework."

"The protests that have been taking place in the West Bank and the Gaza Strip show that we will not succumb to the US-Israeli plan to give up our just cause."

"(D)emonstrations…in Arab countries sent a message to the US, Israel and their allies that the Arab peoples are with the Palestinian people in their struggle for liberation."

The Al-Haq human rights group called for unity against the Trump/Netanyahu scheme that "flout(s) international law."

The group urged world community solidarity against Israeli occupation (unchanged by the no-peace plan), support for "the inalienable right of the Palestinian people to self-determination, including the right of Palestinian refugees to return to their homes, lands, and property."

It urged Palestinian unity to oppose the scheme — sustained resistance the only viable option.

Something much stronger is needed — unequivocal denunciation, leaving no ambiguity of world community opposition and refusal to accept what Trump and Netanyahu proposed.

Their scheme flagrantly breaches international law, rejecting it outright the only option by world community nations — the way to kill it.

A symbolic way is by driving a stake through the document, setting it ablaze, and scattering its ashes to the wind.

Will the scheme backfire as some critics suggest?

If it unites Palestinians for sustained resistance against imperial USA and apartheid Israel, it's a good start.