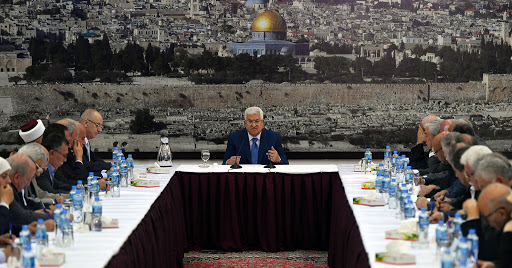 No Change in PA Serving as Israel's Enforcer

The Oslo created Palestinian Authority (PA) is hostile to the rights of the Palestinian people.

Its key officials serve Israeli interests and their own at the expense of millions of Palestinians they betrayed.

In response to the Trump/Netanyahu annexation scheme, a plot to prevent peace, not pursue it, Israeli installed (illegitimate) Palestinian president Mahmoud Abbas threatened to cut all ties to the Jewish state.

In a previous article, I suggested the threat was hollow, rhetorical posturing with no expected follow-through.

He cannot and will not "call off security collaboration with" Israel. He won't make Yasser Arafat's "fatal mistake," costing him his life.

Since Oslo, Abbas has been a loyal Israeli servant, a traitor to millions of Palestinians, his public posturing otherwise falling flat in the Territories.

According to an unnamed senior PA official, "coordination (with Israel) is ongoing, but relations are extremely tense," adding:

If Israel annexes illegal settlements and the Jordan Valley, "(t)here will be major consequences. The entire equation will change."

The Trump/Netanyahu scheme is all about letting Israel formally annex all Judea and Samaria land it wants incorporated into the Jewish state.

It's also about transferring hundreds of thousands of Israeli Arabs from territory known as the Triangle region of the country to a future Palestinian enclave — by redrawing borders, stripping them of Israeli citizenship.

It's a way to unjustifiably justify handing Israel billions of US taxpayer dollars annually on the phony pretext of protecting the country's security against invented threats.

Real ones haven't existed since the 1973 Yom Kippur war ended so they have to be invented, most Americans none the wiser.

Israeli annexation of sovereign Palestinian territory is certain, reportedly delayed until after March 2 elections — on orders from Washington.

A Netanyahu-led Likud tweet had to be deleted, saying: "Sovereignty over all the settlements on Sunday" — meaning yesterday.

Israeli media said Netanyahu and Gantz were informed of this at the White House on January 28.

The difference between now and post-election only matters if delay affects the results.

Poll results show no bump for Netanyahu after release of the annexation scheme.

An average of the latest ones shows Gantz's Blue and White party leading Netanyahu's Likud by a 34.5 to 31.5 seat margin — 61 seats required for coalition rule.

Neither of the two leading parties achieved this threshold in April and September Knesset elections.

As of now, impasse is likely to continue following March 2 elections, an unprecedented situation in Israel that won't stop annexation, just delaying it so far.

Israel has transitional, not permanent government until new elections create one — in March or later on.

Things to some degree are in no man's land, though AG Mendleblit said "(e)ven an interim government has things it can do, urgent things."

Annexation isn't one of them, especially under an interim prime minister indicted for bribery, fraud and breach of trust, facing prosecution for these serious civil offenses later this year — after a new government is in place.

A scheduled Sunday Netanyahu cabinet meeting to rubber-stamp the annexation scheme was cancelled.

The issue will be addressed after March elections, an embarrassment for Netanyahu who wanted momentum from last Tuesday's unveiling maintained without interruption.

According to Israeli political scientist Gayil Talshir, "(i)f (Netanyahu) doesn't bring any dividends on the ground — meaning annexation — it can boomerang."

"Whatever is delayed until after the elections will never happen. (It'll) remain outside for another 50 years."

"If we postpone or reduce the scope of applying sovereignty, then the opportunity of the century will turn into the bungle of the century."

In response to the Trump/Netanyahu annexation scheme, the self-styled newspaper of record urged Palestinians not "to dismiss (it) out of hand," calling it perhaps the "last opportunity" for statehood.

Fact: The Times once again disgraced itself, showing disdain for long-suffering Palestinians.

Fact: It has everything to do with fulfilling Israel's wish list while abandoning any pretense of support for Palestinian rights, consigning them to the trash bin of history.

In its latest edition, the Times said "(m)ost of the world considers the settlements a violation of international law" instead of explaining that under international and US constitutional law, they're flagrantly illegal.

The Times further lied, claiming that Trump unveiled the scheme "as a basis for direct negotiations between Israel and the Palestinians."

No such basis exists now or earlier. In relations with Palestinians, Israel demands things its way, offering nothing in return but empty promises to be broken.

Palestinians are on their own without legitimate leadership in Ramallah or world community allies representing their fundamental rights.

As long as iron-fisted Zionist tyranny controls their lives, livelihoods and futures, they'll never be free — resistance their only option.

Nothing else offers hope!