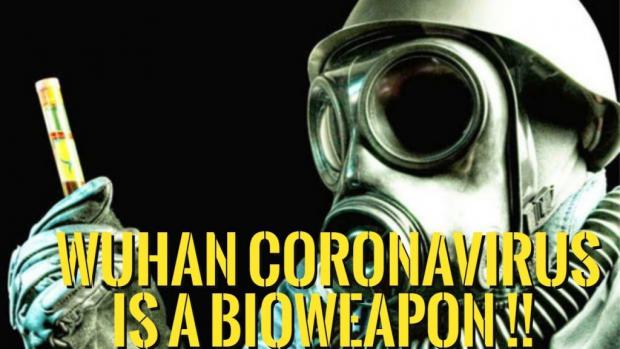 The Great Pandemic Hoax? Is the Coronavirus a Bioweapon?

On January 30, the World Health Organization (WHO) declared the "coronavirus outbreak (to be) a public health emergency of international concern."

On Sunday, US National Institute of Allergy and Infectious Diseases director Anthony Fauci said the coronavirus "almost certainly is going to be a pandemic."

The WHO defines a pandemic as a "worldwide spread of a new disease."

The US Centers for Disease Control and Prevention (CDC) calls it "a disease that spreads across several countries or continents, usually affecting a large number of people."

Britain's Health and Safety Executive says a viral outbreak can be characterized as a pandemic if it's "markedly different from recently circulating strains," notably if "humans have little or no immunity" to it.

The NYT quoted former CDC director Thomas Frieden, saying it's "increasingly unlikely (that the coronavirus) can be contained," adding:

"It is therefore likely that it will spread, as flu and other organisms do, but we still don't know how far, wide, or deadly it will be."

The term pandemic applies to a disease that affects large numbers of people worldwide — clearly not applicable to the coronavirus outbreak based on evidence so far. See below.

"In epidemiologic terms, an outbreak refers to a number of cases that exceeds what would be expected."

"A pandemic is when there is an outbreak that affects most of the world."

"We use the term endemic when there is an infection within a geographic location that is existing perpetually."

An epidemic refers to an infectious disease outbreak in a particular country or community.

How do the above definitions apply to the coronavirus outbreak in China?

Here are the latest numbers through Monday: 20,622 confirmed cases, 426 dead in China, the outbreak mostly in Wuhan and surrounding areas.

Cases in other countries aren't anywhere near epidemic or pandemic levels. Judge for yourself:

Australia - 12, mostly individuals who returned from Wuhan or Hubei province

Most of the above cases apply to Chinese nationals or individuals who returned from the country, in most or all cases from Wuhan.

In response to a question asked me by a friend on the seriousness of the coronavirus outbreak to people in the US, I explained that the chance of being in an auto accident or harmed by one at home is far greater.

I also stressed that establishment media, especially US cable channels, are the most unreliable sources of information on the coronavirus outbreak, featuring fear-mongering reports.

These numbers reflect a national epidemic. Yet little about this is reported — other than annual recommendations to get flu shots, sponsored by Big Pharma.

Natural News calls them "the greatest medical fraud in the history of the world." Why?

The same goes for other vaccines, potentially more dangerous than diseases they're meant to protect against.

They're a bonanza for Big Pharma. On February 1, CNBC reported that "(i)nvestors (are) rush(ing) into biotechs (that are) working on coronavirus vaccine(s)."

A dozen or more companies are working on developing them, clinical testing to begin in a few months, the profit potential huge. When approved for sale, they'll be marketed worldwide, advertising promoting them.

On Monday, Natural News reported that the coronavirus was "engineered by scientists in a lab using well documented genetic engineering vectors that leave behind a 'fingerprint,' " adding:

"(T)he WHO and CDC are covering up this inconvenient fact…"

Law Professor Francis Boyle drafted the US Biological Weapons Anti-Terrorism Act of 1989 — signed into law by GHW Bush, revoked by Bush/Cheney on the pretext of rebuilding America's defenses at a time when the nation's only enemies are invented. No real ones exist.

Boyle believes the potentially deadly coronavirus is a biowarfare weapon, genetically modified for this purpose.

China's Wuhan BSL-4 lab is a WHO-designated research lab, Boyle explaining that the organization is fully aware of what's happening and how.

Boyle's assessment contradicts claims about the virus originating from a Wuhan seafood market or being connected to coronaviruses found in bats.

Indian Institute of Technology scientists "discovered that the Wuhan coronavirus has been engineered with AIDS like insertions" — meaning it's not a naturally occurring phenomenon if true, adding:

It's "quite unlikely for a virus to have acquired such unique insertions naturally in a short duration of time."

China is using AIDS drugs to treat infected patients. China's Center for Disease Control and Prevention is working on developing a vaccine.

In 2009, the WHO falsely predicted a global Swine flu H1N1 pandemic that could affect "as many as two billion people over the next two years."

At the time, evidence suggested that the H1N1 strain was bioengineered in a US laboratory, vaccines produced for it extremely hazardous and potentially lethal.

No national or global emergency existed. No pandemic or epidemic occurred. The CDC estimated that from 8,330 to 17,160 deaths resulted from the strain.

Fear-mongering at the time aimed to convince people to take experimental, untested, toxic and extremely dangerous vaccines that can damage the human immune system and cause health problems ranging from annoying to life-threatening.

A similar scenario is in play today. Vaccines could be rushed to market, Big Pharma promoting their use.

The US had an active biological warfare program since at least the 1940s.

During WW II, the US Chemical Warfare Services began mustard gas experiments on about 4,000 servicemen.

In 1945, the US Atomic Energy Commission (AEC) implemented "Program F."

It was the most extensive US study of the health effects of fluoride – a key chemical component in atomic bomb production.

It's one of the most toxic chemicals known, risking harm to the central nervous system.

Yet low concentration amounts are in drinking water and toothpaste, little or nothing reported officially or by establishment media on its toxicity.

Since at least the 1940s, VA patients were guinea pigs for medical experiments.

The Pentagon earlier released biological agents in US cities to learn the effects of germ warfare in populated areas, tests done secretly.

From the 1960s at least through the 1980s, the US used biological agents against Cuba.

During the Vietnam War, the Pentagon's use of hugely toxic Agent Orange and sarin nerve gas killed, disabled, or caused chronic illnesses for millions, mainly civilians.

In all US wars, radiological, chemical, biological and other banned weapons are used, inflicting a devastating toll on people in targeted areas.

Is the coronavirus a bioweapon as Francis Boyle believes? Most likely, it'll be contained in the weeks ahead, reported numbers of individuals infected falling, not rising.

When all is said and done, ongoing fear-mongering will likely prove to be a bonanza for Big Pharma.

As for the coronavirus, it may end up a footnote in medical history — thousands affected in China, not millions, mainly in and around Wuhan, small numbers elsewhere.

Can These Vitamins Stop the Coronavirus?