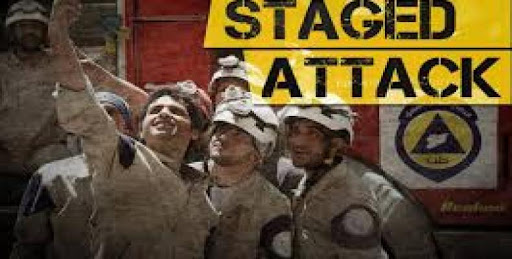 Staging false flag chemical weapons attacks is one of their specialties, wanting Damascus blamed to provide a pretext for malicious propaganda reports and for Pentagon-led warplanes to terror-bomb Syrian sites.

Government forces are steadily advancing in Idlib province, the last major stronghold of US/Turkish supported jihadists in the country.

Last month,  Russian Reconciliation Center in Syria head General Yury Borenkov said  he "received information that (US-supported al-Nusra) terrorists, together with members of the White Helmets pseudo-humanitarian organization, plan to stage the use of poisonous substances and destruction of civilian infrastructure facilities in settlements in the southern part of the Idlib de-escalation zone," adding:

"The aim of the provocation is to prepare photo and video materials to distribute them on the internet, in Middle Eastern and Western media, (falsely) accusing Syrian government forces of using chemical weapons against civilians and of delivering indiscriminate strikes" — to give the Pentagon a pretext to strike Syrian targets.

"The Syrian Army is currently advancing at two separate axes, despite the large presence of Turkish troops inside the governorate."

The Erdogan regime supports jihadists, pretending otherwise, fooling no one.

On Tuesday, the Syrian Arab News Agency (SANA) cited comments by Vanessa Beeley, explaining Big Lies and deception in Western media reports about Syria — the same true about all US wars and other major issues.

Americans are the most over-entertained, unformed people anywhere — lied to by their government and major media on issues mattering most, notably geopolitical ones.

Beeley explained that during her visit to Syria, she witnessed unity among frontline government forces against US-supported terrorists they're combatting to liberate the country.

There's nothing remotely civil about years of war in the Syrian Arab Republic, the nation and its people victimized by US aggression, using ISIS and other jihadists as proxy troops, supported by Pentagon-led terror-bombing.

The Erdogan regime supports these jihadists, Beeley explained, while pretending to be combatting them. Turkish troops illegally occupy Syrian territory.

According to Russia's Defense Ministry, (US-supported) jihadists and White Helmets "finished the shooting of a staged video about alleged use of 'toxic agents' (by) government forces against civilians in the Zerbah settlement of the Idlib de-escalation zone," adding:

"Alleged 'human victims' with symptoms of 'intoxication' can be seen on the video in thick yellow smoke."

"The White Helmets are now ready to spread the fake video on social media for further dissemination through Western and Arab media."

Russia's reconciliation center in Syria said the White Helmets brought 400 liters of toxic agents (about 100 gallons) to the site chosen for the false flag incident.

"Russia's @UN envoy #Nebenzia to #UNSC: Reports about terrorists plotting to organize more provocations and staged chemical incidents in #Syria are alarming. Such staged attacks are used to attain military and political goals."

Throughout nine years of war, launched by Obama, escalated by Trump, not a shred of credible evidence suggested Syrian responsibility for earlier CW incidents and fake ones.

They were all carried out by US-supported jihadists — one of many examples of what dirty war is all about.

There's nothing dirtier than naked aggression by one or more countries against others threatening no one — a US, NATO, Israeli specialty.