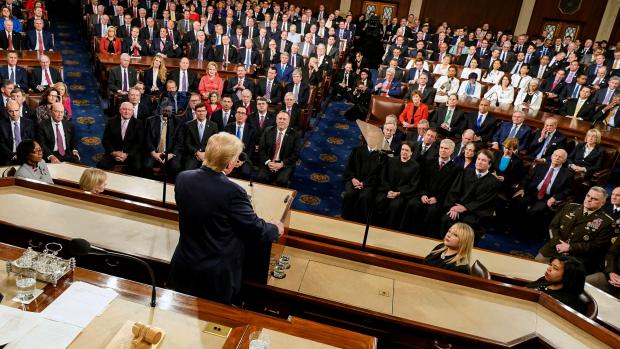 Trump's Reinvented State of the Union

Virtually nothing Trump says in public addresses, statements, and tweets on major issues is credible.

All politicians lie, Trump more egregiously than any of his predecessors, and that took some doing to exceed serial lying of the Clintons, Bush/Cheney and Obama.

Except for rare exceptions, there's plenty about Washington's political class to criticize — notorious for hollow promises broken with disturbing regularity, especially at the highest levels.

Trump's Tuesday State of the Union address was a demagogic exercise in theater over substance, punctuated by his refusal to shake Pelosi's hand, she in turn ripping up a copy of his speech live on national television — reflecting a national divide, shown in polls.

According to the latest Gallup tracking poll, Trump's approval rating rose from 45 to 49%.

"The 87-point gap between Republican and Democratic approval in the current poll is the largest Gallup has measured in any Gallup poll to date, surpassing the prior record, held by Trump and Barack Obama, by one point," the polling agency reported, adding:

"The poll finds 52% of Americans in favor of acquitting Trump and 46% in favor of convicting and removing him from office."

Over 60% of respondents approve of Trump's economic performance — despite dismal main street conditions.

Real unemployment exceeds 20%, real inflation at 6%. Fed policy is all about propping up banks, corporate interests, and the stock market in bubble territory at the expense of the real economy and consumers.

Williams expects "a year of deepening economic, fiscal and financial market turmoil" in 2020.

In his latest report, he said the "FOMC-impaired economy continues to unfold. Recession signals remain in play…"

Durable goods orders collapsed except for military spending. Global freight shipments are at the lowest level since the onset of the 2008-09 great recession.

Retail sales and industrial production are down. The Fed "lost control of the system," said Williams.

If non-QE/QE stopped, the house of cards equity market would collapse.

The Fed-created mess assures an eventual, potentially devastating, day of reckoning — like always before, ordinary people to be harmed most.

No "great American comeback" exists, no "incredible results," no "booming" job market, no "soaring" incomes, no "plummeting" poverty, no "thriving" country except for its privileged class that never had things better.

The state of the nation in 2020 is dismal for ordinary Americans. Half of US households are impoverished or bordering it.

Millions are food insecure, hundreds of thousands homeless at a time when the US is declining politically and economically on the world stage, while other nations are rising.

Trump turned reality on its head, claiming "I am thrilled to report to you tonight that our economy is the best it has ever been (sic)."

Our military (is) unmatched anywhere in the world, and it's not even close (sic)."

"Our families are flourishing (sic).

"The state of our union is stronger than ever before (sic)."

Fact: Tens of millions of working-age Americans are unemployed.

Fact: Most Americans with jobs are way underemployed, needing two or more rotten ones to survive.

Fact: Healthcare is increasingly unaffordable for ordinary Americans, tens of millions of households with no insurance coverage.

A new Harvard study found that despite Obamacare, "the percentage of people who are unable to afford to see a doctor when needed has risen," adding:

"This (is) especially true of people with serious medical conditions like heart disease, for whom physician care is essential."

Since the 1990s, "the share of (US) non-elderly adults who were unable to afford to see a doctor has increased by nearly a third."

Among insured households, "the study found a 60% increase."

US adults with chronic diseases are 20% more likely to skip doctor visits today because of affordability issues, a 63% increase since 1998.

Private insurance is less comprehensive as deductibles, co-pays, and other costs are rising much faster than incomes for most people.

According to lead study author Dr. Laura Hawks, the "findings  call into question the value of private health insurance today."

"When so many people can't get the care they need even when they have insurance coverage, it says that insurance is not doing what it is supposed to do: ensure that health care is affordable when you need it."

The only solution is universal coverage, what Trump, other Republicans and most Dems oppose.

There's nothing "world's most prosperous and inclusive society" about the state of the union today, one of many Trump Big Lies.

Cocooned in luxury surroundings, surrounded by hardliners, he's oblivious to reality for ordinary Americans, dismissive of their daily struggle to make ends meet.

It shows in false comments like "the average unemployment rate under my (regime) is lower than any (others) in the history of our country (sic)."

Except for its privileged class, a prosperous America no longer exists.

Based on the current trend since the neoliberal 90s, in 2020 and years to follow, the state of the union is likely to worsen for ordinary Americans, not improve — whether Republicans or Dems run things.

The nation I grew up in long ago no longer exists — replaced by perpetual wars on humanity at home and abroad.

On issues mattering most on the world stage, both right wings of the US war party march in lockstep, targeting all sovereign independent nations for regime change.

At home, their road to hell is paved with class warfare, social injustice, indifference to the general welfare, and other ill-intentions — the US no longer safe or fit to live in for ordinary people.

1 Comments in Response to Trump's Reinvented State of the Union

Almost everything done in government these days, is simply something to take your focus off the fact that, the only way government has anything to do with you at all is by contract or agreement. This goes for the Federal Government more than the States