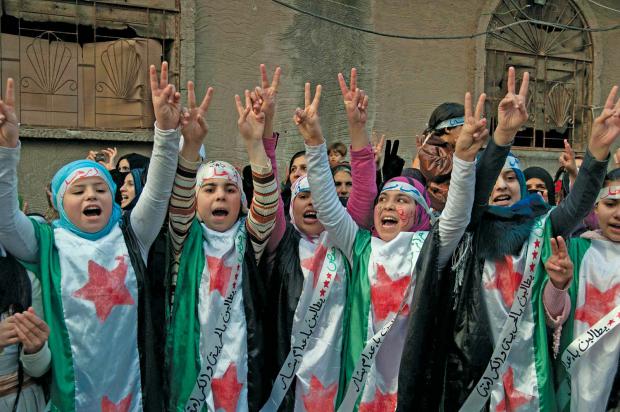 Syria Belongs to the Syrians

None of its territory belongs to US, NATO, Turkish occupiers — uninvited, unwanted and hostile, seeking control over territory not their own, Israel doing the same thing by stealing Palestinian land.

Their ruling regimes pretend to be combatting terrorists they support.

Damascus "reiterates that acts of aggression, either by the Turkish regime or Israel or both of them, will not prevent the Syrian army from continuing its campaign against terrorism until the entire Syrian territories are liberated and completely purged from the presence of terror groups" and foreign occupiers.

The Erdogan regime wants Russia to stop Syrian forces from liberating areas infested with terrorists it supports, a futile request.

Turkey has about a dozen illegal (so-called) observation posts in Idlib, unacceptably agreed to by Moscow last year.

According to Syria's military, Turkish forces established new observation posts in an attempt to halt the advance of liberating government forces.

On Thursday, AMN News reported that government troops are liberating Saraqib, held by jihadists since 2012.

The city is strategically important because the M4 highway runs east and west to the south of the city, connecting it to the coastal city of Latakia.

Running north and south, the M5 highway connects Saraqib to Aleppo and Damascus.

It's why Erdogan threatened Damascus with retaliation if its liberating offensive continues and asked Putin for support to stop it.

According to Southfront on Thursday, the Erdogan regime is supporting al-Nusra terrorists in Idlib by artillery strikes on Syrian controlled parts of the province.

Government forces encircled the city. Turkey's Daily Sabah said they ignored Erdogan's demand by entering and taking control of Saraqib and junction where the M4 and M5 highways intersect.

In the last 48 hours, Syrian troops liberated over 20 towns and villages, aided by Russian airpower — their advances conflicting with Erdogan's revanchist aims.

Defeating US/Turkish supported jihadists in Idlib is essential to Syria's liberating struggle — why ruling regimes in Washington and Ankara want the campaign halted.

According to Tass, controlling Saraqib and the M4/M5 highways juncture "could result in the defeat of (US/Turkish supported terrorists) operating in the country's north."

"Right on cue, while the Syrian Army was storming Saraqib, (Israel terror-bombed) targets in the countryside of the Syrian capital, Damascus, and in the province of Daraa."

Created by the US as imperial proxies, they're deployed where the Pentagon and CIA want them used in Syria, Iraq, Afghanistan, Yemen, and elsewhere — supported by Pentagon and allied terror-bombing.

On Wednesday, Trump's special envoy for regime change in Syria James Jeffrey said "(w)e're very, very worried about" events in Idlib, expressing phony concern for Syrian refugees the US doesn't give a damn about.

Its post-9/11 wars of aggression created the gravest refugee crisis since WW II.

Jeffrey ignored illegal US occupation of northern and southern Syrian territory — while pretending Trump regime support for restoring peace and stability to Syria it's hellbent to prevent.

He called for Russia "to change its policies" in Syria. They're all about aiding Damascus liberate the country from US/Turkish supported terrorists.

They're also about preserving and protecting Syrian sovereignty and territorial integrity — what the US waged war on the country to eliminate.