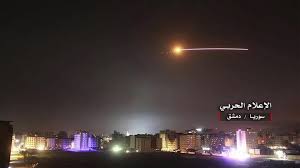 In cahoots with the US, NATO, Turkey and the Saudis, Israel is waging undeclared war on Syria.

By its own admission, the IDF terror-bombed the country hundreds of times in recent years — naked aggression against a nation threatening no one.

The world community, UN secretary general, and Western media are complicit by refusing to condemn what's going on.

Others struck targeted areas, causing damage and casualties. US, NATO, Israeli and Turkish aggression show Syria's liberating struggle as a long way to go after nine bloody years of war and most of the country liberated.

In conducting its latest terror-bombing attack on Syria, Israeli warplanes used a civilian airliner as cover, endangering its passengers and crew.

According to Russia's Defense Ministry, an Airbus-320 airliner en route from Tehran to Damascus with 172 passengers on board was diverted to Russia's Khmeimim airbase in Syria — the aircraft narrowly escaping what it called "the lethal zone of artillery fire."

According to ministry spokesman General Igor Konashenkov, "(o)nly thanks to prompt actions of dispatchers at Damascus airport and effective work of the automated system of monitoring air traffic, the Airbus-320 was escorted from the danger zone and assisted in successfully landing at an aerodrome at the Russian air base," adding:

Notably in September 2018, Israeli warplanes used a Russian IL-20 reconnaissance aircraft as cover for a terror-bombing attack on Syrian targets.

Knowing the Russian aircraft was in harm's way, its Defense Ministry wasn't notified to protect the aircraft and crew, leaving it vulnerable.

It was struck and downed by one or more Syrian ground-to-air defense missiles, the aircraft destroyed, its 15 crew members killed.

Russia held Israel fully responsible at the highest levels for the incident, Defense Minister Shoigu at the time, saying Israel "us(ed) the Ilyushin-20 as cover," calling what happened "hostile."

Ignoring its own lawlessness, Israel blamed Iran, Syria, and Hezbollah for its high crime — the phony excuse rejected by Moscow's Defense Ministry.

Putin at the time blamed the incident on "a chain of tragic circumstances."

Instead of blaming Israel for the hostile incident, he said the Kremlin's response "will be directed primarily at stepping up security of Russian military officers in Syria, our military facilities in the Syrian Arab Republic."

Why does he tolerate US, NATO, and Israeli aggression in Syria?

True enough, he's obligated only to protect Russian security, not Syria's or any other country.

He's aiding Damascus combat terrorism to protect against having to do it in Russia's heartland, the Caucasus, elsewhere in the country, and/or near its borders.

The latest Israeli incident of using a civilian or other foreign aircraft as cover to protect IDF warplanes when attacking Syrian targets suggests more of the same to come.

It shows Israel has no concern for the safety of civilians or other foreign nationals — even those of allied countries.

Throughout its history, its ruling regimes have been responsible for virtually every form of indignity, degradation, barbarity, and other high crimes of war and against humanity imaginable.

The infamous June 1967 attack on the USS Liberty showed its contempt for American lives — killing 34 US seaman, wounding 171 others, severely damaging the vessel.

Lyndon Johnson refused to retaliate at the time — then-Joint Chiefs Chairman Admiral Thomas Moorer calling his inaction "one of the classic all-American coverups."

Israel knew the ship's identity, its US flag clearly visible. Good weather conditions made it easy to spot.

Israeli warplanes circled overhead before attacking, at times low enough for US sailors to wave to its pilots.

They waved back before opening fire with rockets and machine guns against the lightly armed vessel — followed by setting parts of its deck ablaze by striking it with napalm, along with firing torpedoes from Israeli attack boats, opening a 40-foot-wide hole in its hull.

Damage inflicted and the human toll bore testimony to Israel's indifference to the safety of allied lives in pursuing its imperial interests.

The USS Liberty was aided by US warships hours after the attack, repaired in Malta, returned to the US, decommissioned a year later, and removed from Naval Vessel Register listings, part of Washington's coverup — over 50 years ago.

US support for Israel is more one-sided today by Trump regime hardliners than ever before.

Why does Russia's leader respect a figure involved in committing holocaust high crimes against long-suffering Palestinians and waging undeclared war on Syria, Iran, and Lebanon's Hezbollah?

Why does he have normal relations with a nation that threatens Middle East peace and stability in cahoots with the US — the Netanyahu regime uncaring about the lives and safety of Russian nationals in Syria.

Konashenkov said Israel is aware of all Damascus airport incoming and outgoing airtraffic, able to take cover behind commercial aircraft at its discretion when attacking Syrian targets.

It's just a matter of time before incidents like what happened pre-dawn Thursday occur again.