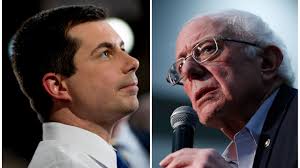 In earlier caucuses, they were known around two hours after votes were cast.

The aroma of fraud taints this year's caucus and undemocratic Dems running it.

On Thursday, the DNC declared political nobody elevated to prominence/South Bend, IN mayor Pete Buttigieg the caucus winner over Bernie Sanders by a 26.2% - to 26.1% margin — with 99% of votes tabulated.

Warren was third with 18%, Biden fourth with 15.8%, Klobuchar with 12.3%, other candidates getting scant support.

The above percentages refer to delegates won, not the popular vote — Sanders ahead on that basis by around a 6,000-vote margin, telling supporters:

"When 6,000 more people come out for you in an election than your nearest opponent, we here in northern New England call that a victory."

Based on his voting record, there's plenty about Sanders to criticize, saying one thing, going another way by voting most often along party lines.

But he's right about Iowa. He won. Yet Buttigieg was declared the winner.

Whatever the final tally when 100% of votes are tallied, and perhaps recounted as called for by DNC chair Tom Perez because of glaring "inconsistencies," the damage was done — especially to the undemocratic Dem party.

In both right wings of the one-party state, the fix is in to assure continuity — peace, equity, and social justice opposed, the swamp filled with and run by neocon hawks and monied interests.

Is Buttigieg the party's choice this year because early favorite Biden perhaps is damaged goods.

It showed by his poor Iowa support. Polls show trailing Sanders by 13 points in New Hampshire, Buttigieg by 7 points — the same margin ahead of Monday's caucus shenanigans.

Days ahead of the Iowa caucus, Sanders led Buttigieg by a 7-point margin. Yet the DNC declared him the loser.

The dubious Shadow, Inc. app used to tabulate votes is linked to Buttigieg and Hillary.

Who is political nobody/elevated to prominence Buttigieg?

He's a Harvard College/Rhodes Scholar Oxford graduate, a former McKinsey & Co. management consultant, and South Bend mayor since 2012 who served from 2009 - 2017 as a US Navy Reserve intelligence officer.

Information on his work at McKinsey is largely kept under wraps, an establishment firm serving corporate and deep state interests opposed to the public welfare.

While Buttigieg was with the firm, it advised Britain to privatize its National Health Service (NHS), urging it to be transformed from universal coverage to a pay or die system like the US.

Buttigieg deplores universal coverage. His so-called "Medicare For All Who Want It" is a scam.

He's for healthcare, a fundamental human right, based on the ability to pay.

His two-tier scheme is straight from the McKinsey playbook, privatization its core feature, keeping US healthcare controlled by Big Pharma, insurers, and large hospital chains.

"I can't tell if @Pete Buttigieg is campaigning for president or my old job at @Cigna."

Pretending to support Medicare "for all who want it," Buttigieg's central economic/financial tenet is that whatever government does, private business does better, so let it run things free from regulatory restraints.

He's a special interests candidate, opposed to popular ones.

As things now stand, the choice for voters in November, like most often before, is likely to be between death by hanging or firing squad.

Nearly always, US presidents and key congressional members serve privileged interests exclusively — at the expense of world peace, equity, justice and the rule of law.