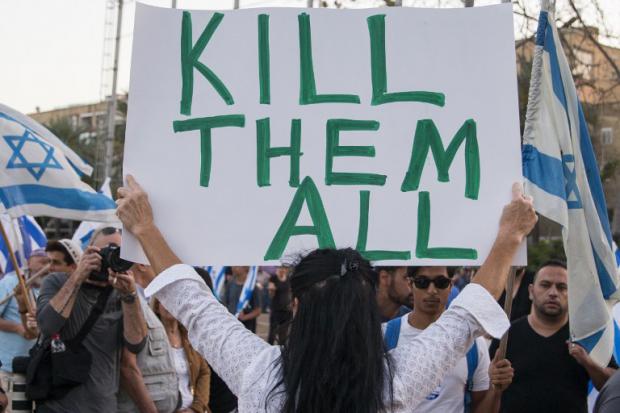 In November 2013, the Kuala Lumpur War Crimes Tribunal (KLWCT) found Israel guilty of the crime of genocide as defined under the 1948 convention dealing with this highest of high crimes. More on this below.

There's no ambiguity about how international law defines crimes of war, against humanity and genocide.

The Tribunal defined crimes against peace as "planning, preparation, initiation, or waging of wars of aggression, or a war in violation of international treaties, agreements or assurances, or participation in a common plan or conspiracy for the accomplishment of any of the foregoing."

The Tribunal defined crimes against humanity to include "murder, extermination, enslavement, deportation, and other inhumane acts committed against any civilian population, before or during the war; or persecutions on political, racial or religious grounds in the execution of or in connection with any crime within the jurisdiction of the Tribunal, whether or not in violation of the domestic law of the country where perpetrated.

The Rome Statute of the International Criminal Court (ICC) was established to address crimes of war, against humanity, aggression and genocide committed by individuals. See below.

The International Court of Justice (ICJ or World Court) has jurisdiction over nations.

In the run-up to its 1947-48 war on indigenous Palestinians, while it went on, and throughout its aftermath to the present day, Israel is guilty of the highest high crimes of war, against humanity, and slow-motion genocide against long-suffering Palestinians.

Before falling from grace by backtracking on his damning findings about Israel's December 2008/January 2009 Cast Lead aggression in Gaza, Richard Goldstone's Commission accused Israel of "serious violations of international human rights and humanitarian law," saying its actions "amount(ed) to war crimes, and possibly crimes against humanity…the people of Gaza (targeted) as a whole."

There's no ambiguity about it in all Israeli wars and other hostile actions against defenseless victims, including state-approved use of live fire on unarmed Palestinians demonstrating peacefully.

"More often (genocide) refers to a coordinated plan aimed at destruction of the essential foundations of the life of national groups so that these groups wither and die like plants that have suffered a blight," adding:

"The end may be accomplished by the forced disintegration of political and social institutions, of the culture of the people, of their language, their national feelings and their religion."

"It may be accomplished by wiping out all basis of personal security, liberty, health and dignity."

"When these means fail, the machine gun can always be utilized as a last resort."

"Genocide is directed against a national group as an entity and the attack on individuals is only secondary to the annihilation of the national group to which they belong."

According to the Convention on the Prevention and Punishment of the Crime of Genocide, this crime includes various acts "committed with intent to destroy, in whole or in part, a national, ethnical, racial or religious group" by any or a combination of the following ways:

1. Killing members of the group.

2. Causing serious bodily or mental harm to members of the group.

3. Deliberately inflicting on the group conditions of life calculated to bring about its physical destruction in whole or in part.

4. Imposing measures intended to prevent births within the group.

The above language is how article 6 of the Rome Statute defines genocide.

Crimes against humanity are defined to include murder, extermination, enslavement, forcibly transferring a population, unlawful imprisonment, torture, forced disappearances, rape and other forms of sexual abuse, apartheid, and related offenses.

Held on November 20 - 25, 2013, the Tribunal heard charges against former IDF general Amos Yaron and the state of Israel.

Yaron was charged with "War Crimes, Crimes Against Humanity, and Genocide in his capacity as the Commanding Israeli General in military control of the Sabra and Shatila refugee camps in Israeli occupied Lebanon in September of 1982 when he knowingly facilitated and permitted the large-scale Massacre of the Residents of those two camps in violation of the Hague Regulations on Land Warfare of 1907; the Fourth Geneva Convention of 1949; the 1948 Genocide Convention; the Nuremberg Charter (1945), the Nuremberg Judgment (1946), and the Nuremberg Principles (1950); customary international law, jus cogens, the Laws of War, and International Humanitarian Law."

Israel was charged as follows:

"From 1948 and continuing to date the State of Israel (hereafter 'the Defendant') carried out against the Palestinian people a series of acts namely killing, causing serious bodily harm and deliberately inflicting conditions of life calculated to bring about physical destruction."

The defendants are guilty of these crimes as defined under the 1907 Hague Convention, Fourth Geneva, the Genocide Convention, the Nuremberg Tribunal, the Rome Statute, and other international laws relating to these highest of high crimes.

"The perpetrators (State of Israel) had committed acts against the Palestinians, with intent to kill, cause serious bodily or mental harms and deliberately inflict conditions of life calculated to bring about the physical destruction of the Palestinians as a whole or in part."

"The Tribunal recommends to the War Crimes Commission to give the widest international publicity to this conviction and grant of reparations, as these are universal crimes for which there is a responsibility upon nations to institute prosecutions."

"The Tribunal deplores the failure of international institutions to punish the State of Israel for its crimes and its total lack of respect of International Law and the institutions of the United Nations."

During days of Tribunal proceedings, witnesses testified, documents and exhibits were presented as evidence of high crimes charged against defendants.

They included severe internal chemical, biological and radiological burns, effects of toxic gases, severed arms, legs, and other body parts, and abdomens sliced open, among others.

"(L)ast night was extreme. The 'ground invasion' of Gaza resulted in scores and carloads with (the) maimed, torn apart, bleeding, shivering, dying – all sorts of injured Palestinians, all ages, all civilians, all innocent."

"The heroes in the ambulances and in all of Gaza's hospitals are working 12-24hrs shifts, grey from fatigue and inhuman workloads (without payment (at) all in Shifa (hospital) for the last four months)."

"They care, triage, try to understand the incomprehensible chaos of bodies, sizes, limbs, walking, not walking, breathing, not breathing, bleeding, not bleeding humans."

"HUMANS! Now, once more treated like animals by 'the most moral army in the world (sic).' "

"My respect for the wounded is endless, in their contained determination in the midst of pain, agony and shock; my admiration for the staff and volunteers is endless."

"My closeness to the Palestinian sumud (steadfastness) gives me strength, although in (some of the) glimpses I just want to scream, hold someone tight, cry, smell the skin and hair of the warm child, covered in blood, protect ourselves in an endless embrace – but we cannot afford that. Nor can they."

"Ashy grey faces – oh NO! Not one more load of tens of maimed and bleeding: We still have lakes of blood on the floor in the ER, piles of dripping, blood-soaked bandages to clear out."

"The cleaners (are) everywhere, swiftly shoveling the blood and discarded tissues, hair, clothes, cannulas – the leftovers from death – all taken away…(only) to be prepared again, to be repeated all over."

"More than 100 cases came to Shifa (in the) last 24 hrs, enough for a large well trained hospital with everything, but here (there is) almost nothing."

"Electricity, water, disposables, drugs, OR-tables, instruments, monitors – all rusted and as if taken from museums of yesterdays hospitals."

"But they do not complain, these heroes. They get on with it, like warriors, head on, enormous(ly) resolute."

"And as I write these words to you, alone, on a bed, my tears flow, the warm but useless tears of pain and grief, of anger and fear. This is not happening!"

"And then, just now, the orchestra of the Israeli war-machine starts its gruesome symphony again."

"Salvos of artillery from the navy boats just down on the shores, the roaring F16, the sickening drones (Arabic 'Zennanis', the hummers), and the cluttering Apaches."

"I invite you – spend one night – just one night – with us in Shifa. Disguised as a cleaner, maybe."

"I am convinced, 100%, it would change history. Nobody with a heart AND power could ever walk away from a night in Shifa without being determined to end the slaughter of the Palestinian people."

"But the heartless and merciless have done their calculations and planned another Dahiya onslaught on Gaza."

"The rivers of blood will keep running the coming night. I can hear they have tuned their instruments of death."

"Please. Do what you can…This cannot continue."

He was there in Gaza during all-out war. He saw it all, treating ravaged bodies pro bono, desperately trying to save lives and comfort the suffering wounded.

Defendant Yaron and the state of Israel were charged with genocidal high crimes against the Palestinian people — Yaron as commanding general when Ariel Sharon was Israeli war minister in charge of Israel's 1982 Lebanon war.

Thousands were slaughtered, largely civilians, including in the Sabra and Shatila camps, what journalist Robert Fisk called "one of the most shocking war crimes of the 20th century."

Global Research explained that "(t)he Prosecution's case against the first Defendant is that the first Defendant had committed War Crimes, Crimes Against Humanity, and Genocide in his capacity as the Commanding Israeli General in military control of the Sabra and Shatila refugee camps in Israeli-occupied Lebanon in September of 1982 when he knowingly facilitated and permitted the large-scale Massacre of the Residents of those two camps."

"These crimes were in violation of, inter alia, the Fourth Geneva Convention of 1949, the 1948 Genocide Convention, jus cogens, International Humanitarian Law; and Articles 9, 10, and 11 of the Charter of the Kuala Lumpur Foundation to Criminalize War."

"The Prosecution's case against the second Defendant is that from 1948 and continuing to date the State of Israel had systematically carried out against the Palestinian people a series of acts namely killing, causing serious bodily harm and deliberately inflicting conditions of life calculated to bring about physical destruction – with the intention of destroying in whole or in part the Palestinian people."

"These acts constitute the Crime of Genocide under international law including the Convention on the Prevention and Punishment of Genocide 1948 ('the Genocide Convention') in particular Article II and punishable under Article III of the said Convention."

"It also constitutes the crime of genocide as stipulated in Article 10 of the Charter of the Kuala Lumpur Foundation to Criminalize War."

"In his opening statement, the Chief Prosecutor Prof Gurdial Singh said that the Prosecution will adduce evidence to prove the counts in the indictment through oral and written testimonies of victims, witnesses, historical records, narrative in books and authoritative commentaries, resolutions of the United Nations and reports of international bodies."

Time and again, when violence occurs in the Territories or abroad in neighboring countries where Israel is involved militarily, victims are wrongfully accused of Jewish state crimes committed against them — called IDF self-defense.

The state of Israeli, its ruling authorities, and military officials have been and continue to be guilty of the highest of high crimes against Palestinians, Syrians, Lebanese, Iranians, and other innocent victims of their lawlessness.

Accountability was never forthcoming, except at the Kuala Lumpur Tribunal.