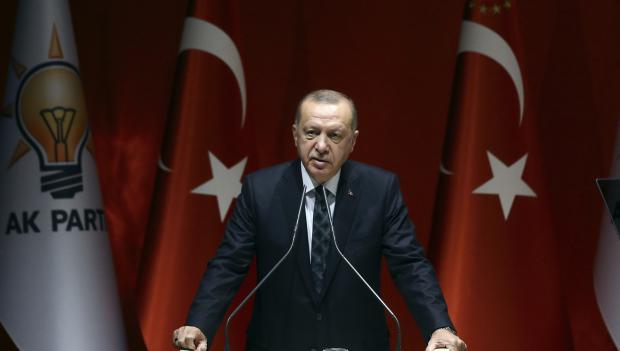 He covets control of northern Syria, what his cross-border aggression is all about, on the phony pretext of combatting terrorism.

Days earlier, he demanded that Syrian forces halt liberation of areas in Idlib province and surrounding areas controlled by US/Turkish supported jihadists — vowing to use force if his demands are ignored.

He's at impasse with Russia over this issue. Talks to resolved differences failed, another round scheduled for Monday.

"We wish to accomplish this via diplomacy in the meetings we have held and will hold with Russia."

"We want to see visible support from Germany and the other European countries and the European Union, as we saw from the UK and the US."

"If we can't stop this, there will be a great humanitarian tragedy." He warned of "other steps" if diplomacy fails.

Turkish vice president Fuat Oktay falsely claimed that the Erdogan regime "fulfilled its responsibilities in Idlib," polar opposite the case.

Throughout the war, Turkey supported and continues support for anti-Syrian jihadists, providing them with heavy and other weapons, giving them safe haven cross-border in its territory, Turkish soldiers aiding them on the ground.

"The real reason of the crisis in Idlib's de-escalation zone is, unfortunately, the (Erdogan regime's) failure to adhere to (its) commitments on" combatting terrorists, supporting them instead.

The situation in Idlib is "exacerbated by the arrival of weapons and ammunition in the deescalation zone via the Syrian-Turkish border, as well as the arrival of Turkish armored vehicles and troops" in the area.

Kremlin spokesman Dmitry Peskov stressed that Syrian forces are combatting terrorists in the country, their fundamental right and obligation to eliminate them, Russia providing aerial support.

After earlier unacceptably demanding that Syrian forces halt their liberating campaign in Idlib by end of February, Erdogan on Saturday demanded their immediate withdrawal from areas close to illegal Turkish observation posts in the country, adding:

"If they do not leave, we will do this work without waiting until the end of February."

All of the above hasn't slowed the advance of government forces, continuing to liberate areas from terrorists supported by the US and Turkey, Southfront reporting the following on Sunday:

"During the past 24 hours, Syrian government forces made a series of advances against Hayat Tahrir al-Sham (al-Nusra) and other radical groups in western Aleppo."

"Government troops are working to expand a buffer zone west of Aleppo city in order to prevent militant attacks on it. The mid-term goal is to secure the entire countryside of Aleppo."

"The likelihood of the jihadists being envelopment is very slim, as they will most likely retreat from the area before they are completely encircled."

On Saturday at the Munich Security Conference, Pompeo was in denial about US decline, falsely claiming "(t)he West is winning," ignoring reality calling western nations "free," the US "thriving (sic)."

He ignored US support for ISIS, al-Qaeda, its al-Nusra offshoot, and likeminded jihadists in Syria, Iraq, Afghanistan, Yemen, Libya, and elsewhere.

On Saturday in Munich, Sergey Lavrov said the following:

"Following principles of international law, Russia will continue assisting the settlement in Syria within the framework of the Astana format and UN mechanisms, helping to bring closer approaches of Libyan parties as the only way of restoring the statehood of this country that was ruined by (US-dominated) NATO."

"The Russian Concept of Collective Security in the Persian Gulf Area is aimed at sustainable normalization of the regional situation" — polar opposite policies pursued by the US, NATO, Turkey, Israel, and the Saudis.

On Russian/Turkish differences over Syria, Lavrov said both countries have good relations but don't agree on everything.

On the issue of Syrian sovereignty and territorial integrity, they're world's apart.

Russia supports the rule of law.  The Erdogan regime opposes it like the US and its imperial partners.