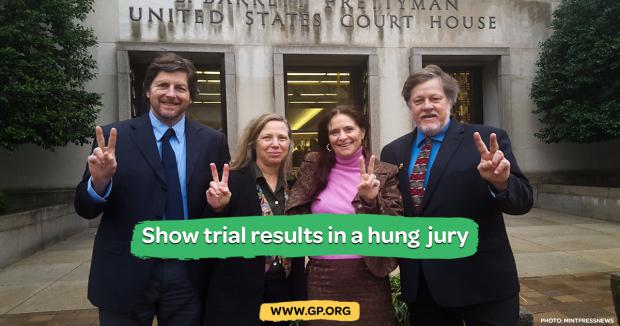 Last spring, dozens of US activists protected Venezuela's Washington embassy with their bodies and spirit to defend the country's sovereign territory from an unlawful Trump regime takeover.

Invited into the embassy and thanked for their activist support by the Bolivarian Republic's legitimate government in Caracas, they held firm from April 10 to May 16 last year, defying Trump regime, secret service, and complicit DC police threats, enduring enormous hardships during their ordeal.

"The individuals were arrested on a criminal complaint charging them with a violation of 18 USC § 118, Interference with Protective Functions of the Department of State (sic), for knowingly and willingly obstructing, resisting, or interfering with a federal law enforcement agent engaged, within the United States (sic)…"

If convicted, they face up to one year in prison and a $100,000 fine — for supporting Venezuelan sovereignty over Trump regime aims to replace it with pro-Western fascist tyranny.

She prohibited their defense team from invoking the following constitutional rights no one may legally deny in the US:

Their right to claim the Trump regime breached the UN Charter, the Geneva Conventions, the Vienna Convention, and other international laws.

Their right to assert that Nicolas Maduro was and remains Venezuela's democratically elected and reelected president.

Their right to explain the Trump regime's coup attempt and economic terrorism against Venezuela, its officials, and population.

Their right to prove the illegitimacy of self-declared president/Trump regime designated puppet Guaido — elected by no one.

Their right to explain illegal collusion between DC police and rent-a-mob Guaido supporters, threatening embassy protectors outside the facility.

Their right to explain Guaido's defrocking as National Assembly head by its majority lawmakers — for corruption and involvement with illicit drug cartels.

Their right to explain that before forcefully removed and arrested, Trump regime hardliners blocked food and medicine from reaching them inside the embassy. Electricity and water were cut off.

Their right to argue that they'd willingly leave the Venezuelan embassy once an equitable agreement was reached between the Trump regime and its legitimate government, respecting the country's sovereignty as defined under international law.

They were permitted only to discuss events from May 13 - 16, the process rigged against them, a constitutional breach — prohibiting them from revealing and explaining the truth, the whole truth, nothing but the truth, and debunking Big Lies about their activism.

In US criminal proceedings, prosecutors are required to prove guilt beyond a reasonable doubt.

Defendants and their lawyers have the right to all relevant documents, witness depositions, questions and answers from interrogations, crime scene and other forensic evidence, police reports, "raw evidence," arrest and search warrants, grand jury testimony, and other relevant data — what's essential for a proper defense.

The purpose of what's called "discovery" is to assure judicial fairness.

Prosecutors are prohibited from withholding relevant evidence and related materials from the defendant and counsel.

Due process and equal justice is the law of the land. Judge Howell changed the rules extrajudicially, likely on Trump regime's Justice Department orders.

Proceedings against the embassy protectors amounted to a judicial lynching. Yet it failed last week, their ordeal far from over.

"After the (Trump regime) presented its case, the four protectors decided not to present a defense because they believed the government did not prove they were guilty," adding:

The Trump regime "was required to prove that beyond a reasonable doubt the four protectors interfered, obstructed and resisted the State Department's efforts to protect the embassy and that they did it knowingly and willfully."

Because of unacceptable/unconstitutional restrictions imposed on the defense team, the "case raised more questions than it provided answers."

On Thursday, jury deliberations began. By midday Friday, its foreman explained that jurors were deadlocked.

Asked by Howell to continue deliberating, four hours later they claimed they were "hung," a mistrial declared.

Howell ordered the process to reconvene February 28 so the Trump regime can decide whether to pursue a retrial or drop charges, the former more highly likely than the latter — what the defense team is preparing for.

"The justice system's subservience to the Trump (regime's) attempt to install an unelected president in Venezuela effectively made this court that supports a coup — a kanga-coup court, if you will."

It's not over, a retrial likely coming. A four-attorney defense team represented the embassy defenders.

They're some of America's best — heroic freedom fighters for right over might.