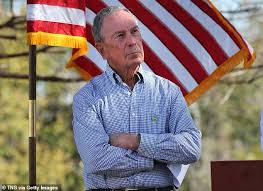 Because his super-wealth is used largely for ill, not good, Bloomberg represents the venality of the hugely corrupted US political system that's too debauched to fix.

A fantasy democracy, never the real thing, Americans get the best rule of privileged interests money can buy, elections farcical when held.

Bloomberg's billions give him a significant edge only money can buy. Forbes ranked him 9th among the world's richest individuals, estimating his net worth at $55.5 billion in 2019.

Last November 24, he declared his candidacy for president. In less than three months, he spent over $350 million on advertising and an elaborate infrastructure to try buying the presidency — intending to spend over $1 billion to achieve his aim.

His deplorable record as New York City mayor bears testimony to how he'd govern as head of state.

During his 12-year tenure, poverty, underemployment, and overall deprivation rose on his watch.

City homelessness more than doubled. Unaffordable housing forced hundreds of thousands to live in substandard dwellings or with family members.

He waged war on organized labor, imposed massive layoffs of teachers, hundreds of firefighters, and many other city workers.

He was elected and reelected the old-fashioned way, anointed by party bosses and Wall Street, outspending challengers multiple times over, drowning out opposition voices.

What he did to New York he has in mind for America. Militantly hard-right, pro-business, and pro-war, he's indifferent to the rights and welfare of ordinary people everywhere, hostile to peace and stability abroad.

Militantly hostile to Iran, he opposed the JCPOA, opposed what Obama agreed to while disagreeing with Trump's unilateral withdrawal.

A statement by his spokesman said as president, he' "reestablish  the coalition that realized the danger of Iran marching toward a nuclear weapon (sic)," adding:

"Collective pressure will be needed to change Iran's behavior" — code language for continued US economic terrorism.

"This should be the starting point for the use of diplomacy. We should also be prepared to employ the leverage that sanctions have provided."

"Iran must come back into compliance with the JCPOA requirements (sic).

Tehran has been in compliance all along, the US, UK, France, Germany, and Brussels breaching their mandated obligations.

As president, Bloomberg would continue US war on Iran by other means. Claiming he wants to "shrink its breakout time" to development and production of nuclear weapons ignores its abhorrence of these weapons, wanting them eliminated everywhere.

Its own legitimate nuclear program has no military component, confirmed repeatedly by IAEA monitors and annual US intelligence community assessments of global threats.

Bloomberg also wants what he calls "inadequacies" of the JCPOA addressed — its sunset clause easily extended by mutual agreement, more intrusive monitoring of the world's most intensively monitored country already, and Iran's legitimate ballistic and cruise missile program its ruling authorities clearly won't abandon nor should they.

Along with other weapons in its arsenal, they're strictly for self-defense, proved by Iran's peace and stability agenda, seeking cooperative relations with other countries, not confrontation the way the US, NATO and Israel operate.

In late January, Bloomberg said "(i)f I am elected, you will never have to choose between supporting Israel and supporting our values here at home. I will defend both."

Equating criticism of Israel to anti-Semitism, he vowed to label it a "hate crime" and combat it as "domestic terrorism," adding:

"I strongly oppose the BDS movement," the most effective initiative by aiming to weaken Israel economically, targeting the country because of it apartheid ruthlessness and breach of core international laws.

Does saying as president he'll "label hate crimes as 'domestic terrorism' (perhaps by executive order), and charge perpetrators according" include designating BDS activism and support for the global movement a criminal offense?

In 2015, a Center for American Progress report on US Islamophobia removed a lengthy chapter critical of Bloomberg's NYPD surveillance of city Muslims — bought by his $1.5 million bribe for starters. More followed.

"Several lawsuits have been filed over the years alleging that women were discriminated against at Bloomberg's business-information company, including a case brought by a federal agency and one filed by a former employee, who blamed Bloomberg for creating a culture of sexual harassment and degradation."

For years, Bloomberg used his super-wealth to buy influence, including with the DNC.

According to Common Cause official Paul S. Ryan, his financial clout makes groups reluctant to "criticize him in his 2020 run because they don't want to jeopardize receiving financial support from him in the future."

"Sources close to Bloomberg campaign tell DRUDGE REPORT that (he's) considering Hillary as running mate, after their polling found the Bloomberg-Clinton combination would be a formidable force…"

Would former co-president with husband Bill, two-time presidential aspirant looser on her own be willing to accept a subordinate position to Bloomberg if asked?

His campaign is reportedly downplaying the idea of her as a running-mate.

They're both New York residents. According to the 12th Amendment, US candidates for president and vice president on the same ticket "shall not be an inhabitant of the same state."

The obstacle is easily overcome by one of the two shifting residency to another state if allying on the same ticket is planned.

The NY Post reported that they've "long been simpatico" since she represented the state in the US Senate and he was NYC mayor.

The Post quoted Dem strategist Brad Bannon, saying pairing the two would be a "net negative. It doesn't make any sense to me," adding:

Bloomberg as Dem standard bearer would "have to offer some kind of an olive branch to the Sanders wing." Hillary as running-mate would be "a thorn" —forgetting that Bernie endorsed her nomination when gotten.

He slammed the idea of "billionaires spending hundreds of millions of dollars trying to get elected."

Last week, Hillary dismissed the idea of agreeing to a running-mate role, saying: "(I)t's never going to happen," adding she turned down Obama's offer twice to be his number two, serving as secretary of state instead.

No matter who's nominated as standard bearers for both right wings of the US one-party state, continuity is assured, things turning out the same way every time.

US governance is all about serving privileged interests exclusively at the expense of ordinary people everywhere.

Nothing in prospect suggests change, why voting is an exercise in futility because ordinary Americans have no say over who serves in high places and how the nation is governed.

Whoever it is, they lose every time, powerful interests alone benefitting like always before.

Official Covid-19 Fatality Estimates for US Were Just Cut by Half! …