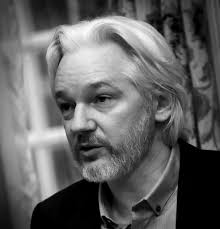 Assange's crucifixion is all about waging war on dissent, truth-telling on major issues, and journalism the way it's supposed to be.

It's about creeping totalitarian rule in the US, UK, and West — equity, justice, and respect for the rule of law in these countries long ago abandoned, their deplorable state supported by establishment media, operating as mouthpieces for their hostile agendas.

An open letter by 60 doctors, representing the views of dozens of likeminded physicians and psychologists from 18 nations, accused the Boris Johnson regime of inflicting serious harm on Assange by "prolonged psychological torture."

They requested that he be transferred from brutalizing prison confinement to a university teaching hospital for evaluation and treatment.

Stonewalled by the Johnson regime, they wrote a follow-up letter to Australian authorities, requesting they intervene on behalf of their citizen — no reply forthcoming.

The Scott Morrison regime is in cahoots with the US and Britain, wanting Assange eliminated by slow torture.

Dozens of doctors from the US, UK, Australia, Austria, Germany, Italy, Norway, Poland, Sri Lanka, Sweden, and other countries signed their appeal for Assange to Britain and Australia.

"It is our opinion that Mr. Assange requires urgent expert medical assessment of both his physical and psychological state of health."

"Any medical treatment indicated should be administered in a properly equipped and expertly staffed university teaching hospital (tertiary care)."

"Were such urgent assessment and treatment not to take place, we have real concerns, on the evidence currently available, that Mr. Assange could die in prison."

"The medical situation is thereby urgent. There is no time to lose."

Last November he warned that "Assange's continued exposure to arbitrariness and abuse may soon end up costing his life," adding:

"In 20 years of work with victims of war, violence and political persecution I have never seen a group of (so-called) democratic states (sic) ganging up to deliberately isolate, demonize and abuse a single individual for such a long time and with so little regard for human dignity and the rule of law."

Melzer warned that if Assange dies in prison, he'll have been tortured to death.

Last November, I said the following:

In cahoots with the Trump regime, Britain is killing Assange slowly for the "crime" of truth-telling journalism the way it's supposed to be.

Longterm isolation behind bars is torture by any standard, a flagrant US Eight Amendment violation, prohibiting "cruel and unusual punishments."

The UN Convention Against Torture defines the practice as any state action "causing severe pain or suffering, whether physical or mental…intentionally inflicted on a person" for information, punishment, intimidation, or intentional discrimination.

We're all Julian Assange. His fate is ours. Proceedings against him are all about targeting speech, press and academic freedoms, wanting them and their practitioners eliminated.

If not done away with in London's Belmarsh prison, Assange's father John Shipton fears his extradition to the US, calling it "a death sentence" if occurs.

Hrafnsson explained that in 2011, Assange received Australia's Walkley award, its Pulitzer prize equivalent — now considered espionage by the US and UK regimes, adding:

The case against Assange is "highly politicized…There is an overwhelming argument for dismissal."

There's a greater argument against wrongful charges with no legal standing, against his unlawful imprisonment, against his police state crucifixion, against a flagrant breach of international law.

Like Chelsea Manning, Assange is a prisoner of conscience, a political prisoner, guilty of no wrongdoing — his torture and abuse by rogue state Britain in cahoots with rogue state USA is a high crime against humanity.

His imprisonment, torture and abuse on dubious charges "establish(es) a precedent that if you are a journalist who does anything that offends any government in the world then you face the very real prospect of being extradited to that country" for prosecution, adding:

"This is a political case and what is at stake is not just the life of Julian Assange."

"It is about the future of journalism" and individuals practicing it with honor and dedication to truth-telling on issues mattering most.