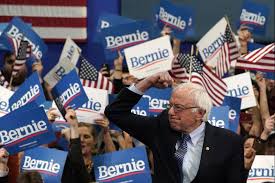 A personal note: I support no candidates from either right wing of the one-party state.

They're dedicated to endless war on humanity at home and abroad, serving privileged interests exclusively, the public welfare be damned, notably since the neoliberal 90s.

Except for Tulsi Gabbard with no chance to be Dem standard bearer in November, the system rigged against her, seven other aspirants for the party's nomination resemble an FBI most wanted list — polar opposite what  governance of, by, and for everyone equitably is all about.

Sanders pretends to represent this standard. His voting record shows otherwise, along party lines most often, contradicting his public rhetoric.

That said, given the deplorable options excluding Gabbard, he's the least worst of a deplorable lot.

At this early stage of the campaign with miles to go before November, he's ahead of rival aspirants.

An average of NYT published national polls as of mid-February shows him slightly ahead of Joe Biden who flopped in Iowa and New Hampshire, way ahead of other candidates, Warren next closest, trailing him by 10 points, Bloomberg by 14, Buttigieg by 15, and Klobuchar by 19 points, billionaire Steyer and Gabbard virtually eliminated from contention.

According to an average of national polls conducted from February 12 - 18, published by Real Clear Politics, Sanders is gaining strength at the expense of other aspirants.

Most stunning is a new ABC News/Washington Post poll, showing Sanders ahead of Biden by 16 points, Bloomberg by 18, Warren by 20, Buttigieg by 24, and Klobuchar by 25 points.

The same poll has Sanders defeating Trump by a 51 - 45% majority.

On February 19, WaPo said the following:

"(O)n the strength of his performances in Iowa and New Hampshire, (Sanders) surged nationally and now holds a sizable lead over all of his rivals for the (Dem) presidential nomination, according to a Washington Post-ABC News poll conducted from February 14 - 17.

January frontrunner Biden slumped dramatically. Because of his super-wealth and willingness to spend whatever it takes to buy the presidency, Bloomberg is a serious challenger to be Dem standard bearer.

WaPo noted that Biden's support crashed from 32% in January to 16% now.

In contrast, Sanders rose from 23% support in January to 32% now, other candidates way behind.

It's way too early in the race to know whether these number will hold. Momentum is key. Much more will be known after March 3 Super Tuesday results.

Results from 11 more primaries by March 17 will give a clearer picture with more state contests to go through June 6.

A Dem standard bearer is unlikely to be known until primary season ends or party faithful super-delegates decide things in July at the national convention.

According to a Data for Progress poll released Monday, Sanders has a 19-point lead over other Dems ahead of Saturday's Nevada caucus.

Ahead of the February 29 South Carolina primary, he and Biden are tied in one poll, the former vice president ahead by 2 points in another.

On Wednesday, the Hill reported that Sanders and Biden are virtually tied in South Carolina, based on mid-February poll results, Steyer a few points behind them, other candidates way behind.

WaPo noted that Sanders "appears well-positioned to accumulate delegates" through Super Tuesday, "and possibly (have a significant) delegate advantage over his rivals" by end of March, adding:

"Biden's poor finishes in Iowa and New Hampshire appear to have robbed him of his image as the most electable against" Trump.

The ABC/WaPo poll showed most respondents (58 - 38%) want a Dem nominee who can defeat Trump.

Most respondents believe Sanders has the best chance.

The latest mid-February Gallup tracking poll has Trump's approval at 49%, his disapproval at 48%.

The ABC/WaPo poll has his approval at 43%, 53% disapproving of his performance.

Note: If no Dem nominee emerges after the first national convention ballot, 771 super-delegates get to vote on subsequent ones.

They're clearly able to swing the nomination to a candidate of their choice in close contest, Sanders not their favorite.