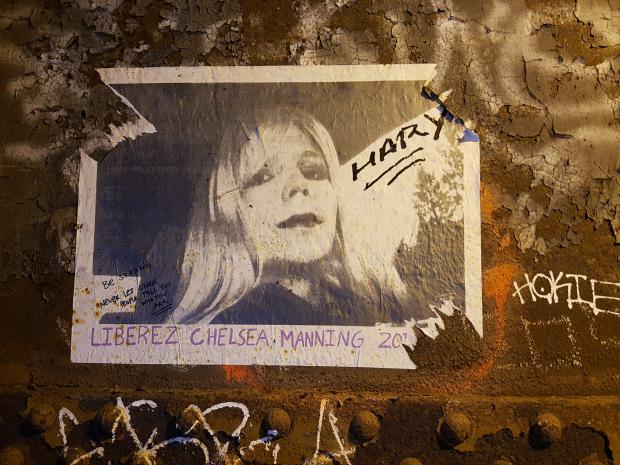 Like Julian Assange, Chelsea Manning is a victim of police state injustice.

She's been imprisoned since last spring and fined $1,000 daily for invoking her constitutional right to remain silent — refusing to give grand jury testimony against Assange that could be self-incriminating.

The right to remain silent is constitutionally guaranteed. It's affirmed by the European Convention on Human Rights. Legal systems of other nations affirm it.

It's what Miranda rights are all about in the US. Police detainees can invoke the right to refuse answering questions asked.

Its purpose is to avoid self-incrimination, along with the right to be represented by counsel for guidance when interrogated.

The US grand jury system is flagrantly unconstitutional, what the Supreme Court should have ruled against long ago for violating the First, Fourth, Fifth, Sixth, Eighth, and Fourteenth Amendments.

The system lets prosecutors manipulate proceedings to get indictments. Their career advancement depends on them.

Americans can be prosecuted for claimed association with "undesirable group(s)."

They're subjected to unreasonable searches and seizures by unchecked surveillance powers of the state, their privacy compromised.

Due process, habeas rights, and equal justice under law greatly eroded. All of the above are hallmarks of police state rule.

Manning's First, Fourth, Fifth, Sixth, and Eight Amendment rights were violated. The same goes for Julian Assange, UK actions against him based on Trump regime orders.

Her Fifth Amendment rights of due process, protection from self-incrimination, and possible double jeopardy were violated.

So was her Sixth Amendment right of a public trial represented by counsel, an impartial jury, and nature of charges against her. Silence is not a crime.

Subjecting her to cruel and unusual punishments violated her Eight Amendment rights.

Demanding she testify before a grand jury in secret without counsel violated her Fifth and Sixth Amendment rights.

In a February 19 motion to the US District Court for the Eastern District of Virginia, the same one to try Assange if he's extradited to the US, Manning's attorney Moira Meltzer-Cohen petitioned the court for her release from punitive incarceration, a procedure called a Grumbles motion, saying:

"A witness who refuses to cooperate with a grand jury subpoena may be held in contempt of court, and fined or incarcerated."

"The only permissible purpose for sanctions under the civil contempt statute is to coerce a witness to comply with the subpoena."

"If compliance is impossible, either because the grand jury is no longer in existence, or because the witness is incoercible, then confinement has been transformed from a coercive into a punitive sanction, and thus is in violation of the law."

"Over the last decade, Chelsea Manning has shown unwavering resolve in the face of censure, punishment, and even threats of violence."

"As Ms Manning's resolve not to testify has been unwavering, and as her moral conviction has become only more developed since her confinement, her incarceration is not serving its only permissible purpose."

"The key issue before Judge (Anthony) Trenga is whether continued incarceration could persuade Chelsea to testify."

"Should (he) agree that Chelsea will never agree to testify, he will be compelled by the law to order her release."

"She reiterated her refusal to cooperate with the grand jury process before this court, and has now reiterated that refusal every day for more than 11 months."

"There is no reason to believe she will at this late date experience a change of heart; there is a profusion of evidence that she will not."

A statement by Manning said she refuses to give grand jury testimony because of her "longstanding belief that (they they're) used by federal prosecutors to harass and disrupt political opponents and activists through secrecy, coercion, and jailing without trial," adding:

"No matter how much you punish me, I will remain confident in my decision."

"I have been separated from my loved ones, deprived of sunlight, and could not even attend my mother's funeral."

"It is easier to endure these hardships now than to cooperate to win back some comfort, and live the rest of my life knowing that I acted out of self-interest and not principle."

Manning proved she's incoercible. She can't be pressured, harassed or punished into doing what she believes violates her moral and ethical code of conduct.

Last November, UN Rapporteur on Torture Nils Melzer called for her immediate release in a letter to the Trump regime.

Calling her imprisonment unjustifiable, he said disproportionate fines against her should be cancelled, the amount exceeding $235,000, the figure increasing by $1,000 daily.

After a personality assessment of Manning by clinical/forensic psychologist Sara Boyd, she said the following that's included in Meltzer-Cohen petition for her release, saying:

"Manning exhibits longstanding personality features that relate to her scrupulousness, her persistence and dedication, and her willingness to endure social disapproval as well as formal punishments."

She cannot be coerced into doing what she believes is fundamentally wrong.

For the past decade, she proved that no matter how harshly she's punished, she remains undaunted and steadfast to her principles.

Welcome to Dystopia. A $1000 Fine for Walking on the Beach?!