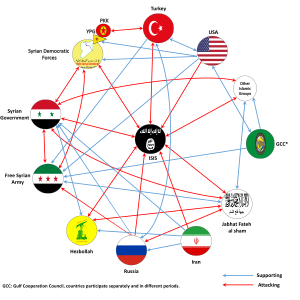 That's what his phony "safe zone"  scheme is all about, unrelated to helping Syrian refugees he doesn't give a hoot about.

An earlier Business and Human Rights Resource Center (B&HRRC) report accused his regime of exploiting Syrian refugees in Turkey as near-chattel workers, including young children, profiting from their misery, paying them sub-poverty starvation wages and no benefits.

Zionist zealot Bennett is more extremist than Netanyahu, espousing neo-Kahanist notions, including contempt for human rights, the rule of law, while supporting might over right.

Time and again, Bennett threatens Iran and Syria. Despite an uneasy relationship with Netanyahu, the prime minister appointed him war minister to buy his loyalty that's not for sale.

At the time, Haaretz said Netanyahu and Bennett struck "a cynical bargain" even for Israel's extreme politics, a move the PM hoped would aid his political survival.

Bennett represents settler interests. The son of US immigrants, he's one of Israel's super-rich class.

Bennett encourages settlers to shoot Palestinians, earlier bragging about "kill(ing) lots of Arabs in my life" during military service.

On Tuesday, he claimed the Netanyahu regime "identif(ied) signs of loosening and recalculation by Iran regarding its plans in Syria (sic)," adding:

"We just started and we will increase. We will go from a defensive concept to an offensive concept – weakening, tiring and erasing (Iran's) head by weakening its tentacles."

"For us, Syria is not only a threat but also an opportunity. They send forces there and try to exhaust us, but we can turn the downside into an advantage."

"We have intelligence and operational superiority, and we are telling Iran clearly: 'Get out of Syria. You have nothing to look for there.' "

Iran has political, economic and military ties to Syria, the latter by military advisors, aiding government forces combat the scourge of US/NATO/Turkish/Israeli/Saudi-supported terrorism.

According to Bennett, the Netanyahu regime and IDF are "rais(ing) the stakes for Iran…to prevent an Iranian presence on our northern border" — despite no threat its diplomats and military advisors pose to Israel.

A new IDF Iran Command was formed to deal with the nonexistent threat, its tactics perhaps to intensify hostile Israeli actions against Tehran, including cyberwar.

The US "will not spare any effort, including working with allies, to isolate (Damascus) diplomatically and economically…"

Syria is Obama's war escalated by Trump. Ongoing for nine years, there's no prospect for resolution because bipartisan US hardliners reject restoration of peace and stability to the war-torn country.

He stressed the following:

"(I)t is necessary to stop protecting (jidadists), including those from UNSC-listed organizations such as" al-Nusra under whatever other names it calls itself.

Many were found "in schools and hospitals converted into combat positions."

As long as the West, Turkey, Israel and the Saudis support jihadists, conflict will continue endlessly.

Time and again during Security Council sessions on Syria, nations opposed to its sovereignty and territorial integrity play "the card of civilian suffering and longterm truce every time when the terrorists (they) cherish are in danger," said Nebenzia.

"(Y)ou stubbornly keep speaking about deliberate bombings of schools, hospitals and refugee camps" — phony accusations that ignore reality on the ground, turning a blind eye to efforts by Syrian and Russian forces to protect civilians who are attacked by US/Turkish supported jihadists.

In the past 24 hours alone, Russia's reconciliation center in Syria recorded 29 shelling attacks by terrorists against government forces and civilians — ignored by the West and establishment media.

Nebenzia also stressed the importance of beginning post-conflict reconstruction in liberated areas, including hospitals, schools and other infrastructure.

Yet the Trump regime and its imperial partners imposed sanctions on Syrian companies involved in reconstruction, an attempt to undermine their efforts.

Russia continues going all-out to restore peace and stability to Syria — what the US and its imperial partners want prevented.