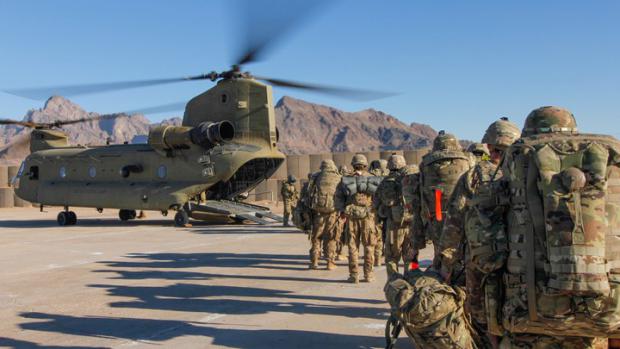 Planned months in advance, the Bush/Cheney regime attacked nonbelligerent Afghanistan less than four weeks after the 9/11 mother of all false flags — orchestrated by the CIA, perhaps with Israel's Mossad.

The Taliban and bin Laden had nothing to do with what happened on a day that will live in infamy, opening the gates of hell for endless US wars of aggression against nations threatening no one — spending countless trillions of dollars on mass slaughter and destruction, consigning the rule of law to the trash bin of history.

Over 18 years later, unwinnable war and occupation of Afghanistan continues — no end of it in prospect.

The US came to Afghanistan to stay, the same true in all its post-9/11 war theaters and the former Yugoslavia preceding them in the 90s — raping and destroying nations attacked, occupying them directly or with pro-Western puppet regimes.

Preemptive war on Afghanistan was waged to control the country and its resources, potentially worth trillions of dollars in economic value.

The above is a treasure US policymakers have no intention of relinquishing, wanting corporate America profiting from them.

Washington also wants to construct oil and gas pipelines across Afghanistan, wanting its territory used as part of a plan to encircle Russia and China, along with maintaining opium production used for heroin.

What the Taliban eradicated pre-9/11, the US restored. A bonanza for money-laundering Western banks, the CIA relies on drugs trafficking as a revenue source.

Time and again, the US proved it can never be trusted, breaching international law, treaties, conventions, and bilateral agreements with other countries.

Whatever the US agrees on with negotiating partners isn't worth the paper it's written on — commitments abandoned at its discretion.

"The CIA's "Army' ": A Threat to Human Rights and an Obstacle to Peace in Afghanistan," saying:

CIA operatives infest Afghanistan with no intention of leaving. Paramilitaries they control serve US imperial interests.

Their existence and the CIA's presence in Afghanistan, on the phony pretext of combatting terrorism the US supports, makes restoration of peace and stability in the country unattainable.

It's true whether Pentagon forces stay or leave, the former virtually certain, the latter if claimed foolhardy to believe.

Langley paramilitaries are the modern-day equivalent of CIA-recruited Afghan mujahideen fighters against Soviet occupiers in the 1980s — today's Taliban, combatting illegal US war and occupation of their country.

They want it back, US and allied invaders out. It's not likely as long as the CIA's private army remains in the country.

They're shielded from public oversight and accountability. The US installed puppet regime in Kabul knows little or nothing about them, no say whatever about how they operate or for what purpose.

The CIA operates extrajudicially worldwide, including domestically in breach of its mandate.

A truce in name only was agreed to by the Trump regime and Taliban. Can what never worked before be likely now?

The NYT claimed it's a "first step toward signing a deal to withdraw American troops."

How possible when even if they leave, they'll likely return, CIA operatives and Langley's paramilitary army remaining in place, US occupation continuing in new form.

According to the Times, if a partial truce holds for seven days, both sides "will meet on Feb. 29 to sign an agreement laying out a timetable for the United States to withdraw its troops."

If it happens, the agreement won't be worth the paper it's written on.

Whatever is said publicly, restoration of peace and stability to any active US war theater is more illusion than real.

The proof of the pudding, as the saying goes, is reality on the ground in all nations the US attacked preemptively post-9/11 — endless wars, instability and chaos continuing, nothing suggesting resolution.

The US doesn't negotiate. It demands, wanting things its way. Whatever one ruling authority in Washington may agree on, a succeeding one walked away from time and again.

Besides breaching international law and walking away from international agreements, Obama's withdrawal of US forces from Iraq in 2011 didn't last long.

US occupation resumed in mid-2014, continuing to this day. Thousands of US forces controlling strategic parts of the country won't leave — even though Iraqi authorities want them out.

Will Afghanistan be different? Will the US agree to leave and not reoccupy the country ahead?

Will it matter if CIA operatives and its paramilitary army control areas Pentagon forces withdraw from?

Will peace talks make a difference when they're highly likely to turn out like Israeli-Palestinian no-peace ones, the outcome each time they're held?

Can the Taliban co-exist with a US-installed puppet regime in Kabul it rejects because it has no legitimacy?

If Pentagon forces are withdrawn from Afghanistan like earlier, it'll likely be short-term to redeploy them as a hostile force elsewhere.

What the Taliban demand they won't get — complete withdrawal of US and foreign troops from their country with assurances that that the move is permanent.

Currently about 14,000 US forces, around 17,000 more from dozens of other countries, and undisclosed numbers of CIA paramilitaries occupy Afghanistan.

The Taliban control most Afghan territory. Whatever is agreed on with the US will be tenuous at best.

The Taliban agreed to keep its fighters out of what it called "enemy territory" and return fire only in self-defense, a sort of maybe ceasefire that could and likely will end for any reason ahead.

The Pentagon saying it'll continue operations against ISIS and al-Qaeda in Afghanistan is a ruse — the US supporting these jihadists, not combatting them.

They're in Afghanistan because the Pentagon and CIA deployed them there, the same true wherever they show up.

Chances for the US agreeing to pull out and restore peace and stability to the country are slim at best, highly deceptive at worst.

The same goes for all its war theaters. They rage endlessly because bipartisan hardliners in Washington want things this way.

Since Pentagon forces preemptively attacked North Korea in June 1950, a nation threatening no one, the US has been at war directly and/or through proxies at all times against one or more countries since then.

Both right wings of the one-party state reject world peace, stability, equity, justice, and the rule of law.

It's why endless wars on humanity rage at home and abroad against invented enemies.

No real ones existed since WW II ended.

1 Comments in Response to US Forever War in Afghanistan Near Ending?

US to Slash Afghan Aid by $1 Billion

The Taliban agreement isn't ideal, but the U.S. military has to get out of Afghanistan

US Airstrikes Continue in Afghanistan Despite Peace Deal

REVEALED: Trump talked on the phone with Taliban leaders...