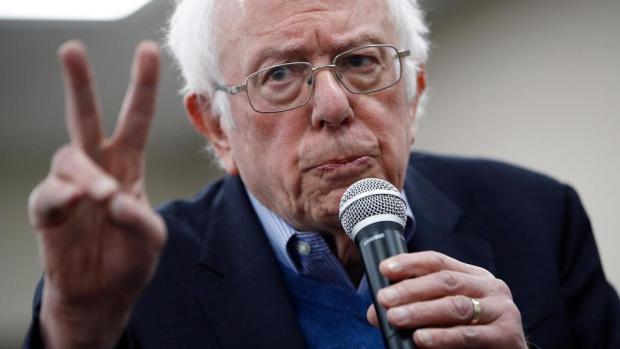 It's early in the race for the White House with a long way to go, Sanders the current frontrunner to become Dem standard bearer — after being way behind months earlier.

Momentum is in his favor if able to keep it. Early frontrunner Biden is greatly weakened after doing poorly in the first three contests.

A mid-February ABC News/Washington Post poll was stunning — showing Sanders ahead of Biden by 16 points, Bloomberg by 18, Warren by 20, Buttigieg by 24, and Klobuchar by 25 points.

Reporting on the results, WaPo said "Sanders (before Nevada caucuses) surged nationally and now holds a sizable lead over all of his rivals."

If he matches Biden in Friday's South Carolina primary, a state the former vice president was projected to win handily months earlier, and Sanders emerges the clear March 3 Super Tuesday winner, a real possibility, added momentum would make him the clear favorite in the Dem race, along with likely knocking Biden and perhaps other Dems out of contention.

Establishment media haven't been supporters of Sanders so far. Is that changing given his surge and their hostility toward Trump for defeating media darling Hillary?

What DJT achieved in 2016 surprised most observers, notably the NYT.

In its November 8, 2016 edition, the Times said she had "an 85% chance to win," virtually counting Trump out of the race, adding:

Hillary's "chance of losing is about the same as the probability that an NFL kicker misses a 37-yard field goal."

She and supporters had balloons ready to be released and champagne on ice to be uncorked as soon as her triumph was announced. They're still waiting.

Throughout the 2016 race to now, the Times and most other establishment media have been militantly hostile toward Trump, cool toward Sanders until possible signs of warming up occurred. See below.

In spite of media hostility, DJT won in 2016 and is favored to be reelected.

Because of antipathy toward him by the Times and most other establishment media, will they support Sanders despite favoring almost any other Dem over him in this year's race for the White House?

Media support most often is key to gaining an edge over political opponents. Establishment figures are virtually always backed to assure continuity.

If Sanders keeps doing well in upcoming primary races and gets media bosses on his side, he could become Dem standard bearer without a brokered convention.

If things turn out this way, one thing is certain. A regime led by Sanders would assure continuity, no change in dirty business as usual domestically and abroad — other than perhaps minor tinkering around the edges too little to matter.

Rest assured, none of the above would become the law of the land with Sanders as president, far from it, notably because most congressional members oppose progressive policies.

To become GOP and Dem standard bearers requires aspirants to sell their souls to the system, clearly the price for becoming president.

Has Sanders won over the self-styled newspaper of record NYT? On Monday it said "Sanders looks to knock out Biden" from contention…"to all but extinguish his candidacy (by) amass(ing) an insurmountable delegate lead" after next week's Super Tuesday primaries.

On Monday, the Washington Post said he "seized a commanding position in the (Dem) presidential race, building a diverse coalition that is driving (him) toward the cusp of a takeover of a major political party…hungry to defeat" Trump.

On the same day, even hard right Wall Street Journal editors said "Bernie's rout in Nevada makes him the favorite for the nomination."

"It ain't over till it's over," baseball great Yogi Berra long ago said. He and movie mogul Samuel Goldwyn once remarked about the hazards of making predictions — "especially about the future," they said.

It's Trump's election to lose, Sanders a long shot to defeat him, things perhaps a little tougher by tweeting:

"The Israeli people have the right to live in peace and security. So do the Palestinian people."

"I remain concerned about the platform AIPAC provides for leaders who express bigotry and oppose basic Palestinian rights. For that reason I will not attend their conference."

Sanders "never attended our conference and that is evident from his outrageous comment (sic)."

"(M)any of his own Senate and House Democratic colleagues and leaders speak from our platform" — to their shame, the organization supporting Israeli apartheid rule omitted, adding:

"By engaging in such an odious attack on this mainstream, bipartisan American political event (sic), Senator Sanders is insulting his very own colleagues and the millions of Americans who stand with Israel."

US political supporters and high-net-worth donors to the Jewish state are complicit with its high crimes to their shame.

If elected president, Sanders will surely support Israel as he has throughout many years in Congress.

What he tweeted and how he operates are world's apart, true as well about most of what he says and does.

He been a card-carrying dirty business as usual politician for nearly 40 years, going along to get along, based on his voting record, largely along party lines.

If elevated to the nation's highest office in November, he'll likely operate as he did in the House and Senate — supporting continuity like most often before.

His most redeeming feature is he's not Trump, a plus in his favor — whether with most voters remains to be seen if he and DJT meet in November.

Trump Signs Corporate Bailout Bill: A Measure That Will Live in Infamy