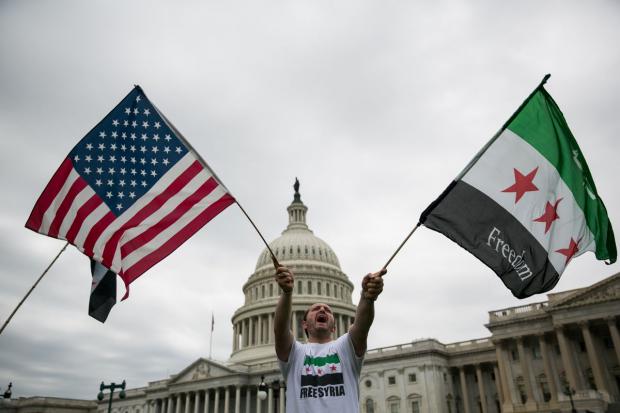 Establishment media are on the wrong side of vital domestic and geopolitical issues just societies hold dear.

When the US preemptively attacks a nonbelligerent nation threatening no one, their reports on the conflict read like Pentagon/CIA press releases.

Sanitized to support aggression, truth-telling is suppressed, no exceptions to the rule.

Supported by Pentagon-led terror-bombing since 2014, the US war machine is responsible for massacring tens of thousands of Syrian civilians.

Washington's aim in Syria is replacing its sovereign independence with tyrannical pro-Western puppet rule under conditions of perpetual conflict and chaos like in Afghanistan, Iraq, Yemen, and Libya.

Instead of laying blame where it belongs, establishment media falsely blame Syrian and allied forces for high crimes committed by the Pentagon, its NATO allies, Israel, and their jihadist proxies.

The NYT is the enemy of peace, stability, and the rule of law, notably by its misinformation, disinformation, and Big Lies on US wars, Syria in the eye of the storm.

In its latest edition, it falsely blamed Syria's liberating struggle for creating a "humanitarian emergency."

Polar opposite is true. When government forces arrive in liberated cities, towns and villages, they're embraced and thanked by civilians for freeing them from jihadist captivity.

According to Russia's reconciliation center in Syria, no large-scale exodus is ongoing as falsely claimed by the UN and establishment media, no satellite imagery showing it.

Tens of thousands of liberated Syrians are returning to their home areas, aided by Russian and government supplied humanitarian aid — what's never explained by the Times or other establishment media.

Russian and Syrian forces are their rescuers — the US, NATO, Turkey's Erdogan regime, and their jihadist foot soldiers their enemies, fully responsible for their suffering, along with Israel for repeatedly terror-bombing Syrian areas.

The Times falsely claimed civilians in northern Idlib province "may be bombed at any moment" by Russian and Syrian warplanes — a bald-faced Big Lie.

"The only defender of these desperate people is Turkey (sic), which has dispatched thousands of troops, tanks and artillery into the region in recent weeks."

Like the US, NATO and Israel, Turkey is an aggressor, operating illegally in northern Syria in pursuit of wannabe sultan Erdogan's revanchist aims — unrelated to aiding Syrian civilians he doesn't give a hoot about.

Like the NYT and other establishment media, WaPo opposes Syria's liberating struggle, calling for the campaign to free civilians from captivity in Idlib to end.

Separately on Tuesday, Pompeo addressed the situation in Idlib, falsely calling the liberating campaign by Syrian and Russian forces "aggression" — a US, NATO, Turkish, Israeli speciality, not how Syrian forces defending their country and Russia aiding them operate.

Greatly aided by Russia, Syrian forces are liberating the country from jihadists these countries support, the campaign to continue until they're eliminated.