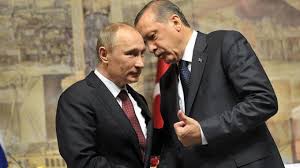 Putin and Erdogan to Discuss Syria in Moscow

Reportedly they'll meet on March 5. Will Putin challenge Erdogan's aggression or appease him like earlier?

Will Russian aerial support for Syrian ground forces escalate strikes against US/Turkish supported jihadists in Syria's Idlib province to deliver a strong message to Trump and Erdogan that their aggression no longer will be tolerated?

Will Putin direct Russian warplanes to down hostile Turkish aircraft and drones in Syrian airspace that are attacking government forces and civilians?

Will he focus on diplomacy that failed since initiated in 2012 or shift strategy by getting tougher?

He invested a great deal into protecting and preserving Syrian sovereignty and territorial integrity against US, NATO, Turkish, Israeli, Saudi supported jihadists to back off now.

Illegal US/Turkish occupation of Syrian territory and their support for jihadists could prolong endless war as long as their regimes are hostile to resolving it unless pushed.

Interviewed by Tass, Putin said "(w)e're not going to go to war with anyone, but we are creating a situation in the defense field so that it doesn't occur to anyone to fight us," adding:

Russian super-weapons exceeding the best in the West can "easily penetrate any missile defense system."

Putin is involved in Syria to prevent the scourge of US/NATO/Turkish/Israeli/Saudi supported terrorists from spreading to Russia's heartland.

Will he apply the same objective to other regional hot spots where US supported terrorists operate?

Will he apply it to greater countering of US/Turkish aggression in Syria — to prevent Erdogan's annexation of northern Syrian territory and challenge Trump regime occupation and theft of Syrian oil?

Putin saying he wants to dissuade other countries from attacking Russia won't deter the US from pursuing regime change to replace his government with pro-Western puppet rule if bipartisan hardliners in Washington think he's soft.

Hopefully Russia will maintain a super-weapon advantage over the US and NATO as long as they remain adversarial.

Separately, Putin said he wishes to discusses renewing New START with the US, calling it the "gold standard" of disarmament agreements.

Hardliners infesting his regime want the deal abandoned so no restraints will deter US nuclear weapons development,  deployment, and possible use against invented adversaries.

New START expires on February 5, 2021. If not renewed, it's gone, Trump showing he's more a deal breaker than maker, abandoning international obligations instead of observing them — notably the landmark JCPOA and INF Treaty, based on Big Lies.

Putin said he called on the

Trump regime to extend New START with no preconditions, but got no reply.

He stressed that reckless US policies aim to upset strategic stability and balance.

Russia's super-weapons maintain it as long as Moscow remains technologically ahead of the US in developing them.

Russia is an ally of world peace, stability, mutual cooperation with other nations, and multi-world polarity.

The US under both right wings of its war party is their mortal enemy.

So is tinpot despot Erdogan in his part of the world.

That's why diplomacy with them fails. The only language they understand is toughness.