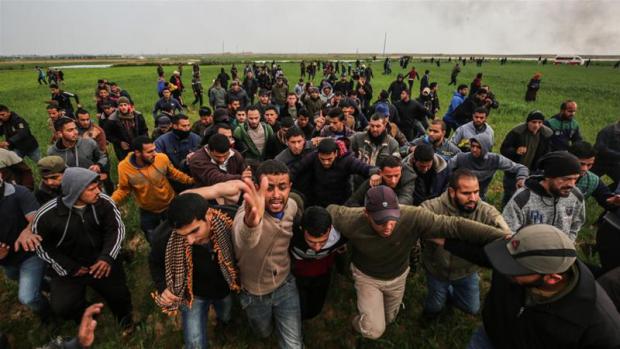 In its weekly report for the March 12 - 18 period, the Palestinian Center for Human Rights (PCHR) reported no letup in Israeli excessive force against defenseless Palestinians.

During the week ending March 18, security forces used live fire on six Palestinian farmers in their fields and two fishermen at sea — individuals threatening no one.

There were 61 incursions into Palestinian communities, an average of about 9 daily — 41 arrests made, including 4 children, individuals who committed no crimes.

Protected by soldiers and police, 5 attacks by settlers occurred against Palestinians and their property.

Over two dozen military checkpoints were established to harass and obstruct free movement for Palestinians.

Flagrant Israeli human rights abuses against Palestinian occur multiple times daily every day of the year without letup — including during the current health emergency.

Since 2007, there's been no "improvement to the movement of persons and goods (or) humanitarian conditions (that caused) catastrophic consequences on all aspects of life," PCHR explained.

Daily life throughout the Occupied Territories is defined by excessive violations to "the right to life and to bodily integrity."

"Excessive use of force against (peaceful) protests" for fundamental rights denied turned the Territories into an undeclared war zone — now during a health emergency no different than other times.

"Despite the unprecedented health crisis requiring residents of Israel and the Occupied Territories to take extreme social isolation measures," the Netanyahu regime "escalate(d) abuse and collective punishment" of the Palestinian community.

During the day, at night, pre-dawn, on weekdays and weekends, security forces continue to rampage through the neighborhood.

"(F)or no apparent reason, (they) initiated friction with the residents."

Neighborhood entrances were blocked, numerous arrests made, mostly minors, terrorizing them in custody.

B'Tselem: "(P)olice abuse of Palestinians in al-'Esawiyah, by now a permanent feature of life in the neighborhood, is illegal and cannot be justified even under the usual routine of occupation."

"Yet at this sensitive time, such conduct exposes residents to substantial, completely unnecessary health risks, as it encourages gatherings and forces arrested residents, including many minors, to leave home and be around strangers."

"Israeli authorities disregard the lives of al-'Esawiyah residents, including children and teens, is nothing new."

"Yet continuing and even escalating such conduct during a (public health emergency) is an especially appalling manifestation of this policy."

On Monday, Haaretz reported that doctors warned of Gaza's potential collapse after COVID-19 cases were reported in the Strip, according to its health ministry.

Severe overcrowding risks the spread of disease to many others.

"Everything I am hearing is if the outbreak reaches the magnitude where you need more than 60 ICU beds to treat, it will become increasingly difficult and could well turn into a disaster of gigantic proportions," he stressed.

Shops and restaurants are closed in the Strip, Friday prayers suspended.

Quarantine centers were established in schools and other facilities for Gazans ill with COVID-19, according to the Strip's health ministry.

Israel tightened blockade conditions to prevent entry or exists from the Strip without hard to get permission.

"If the biggest and most powerful countries are struggling, how is Gaza supposed to cope?"