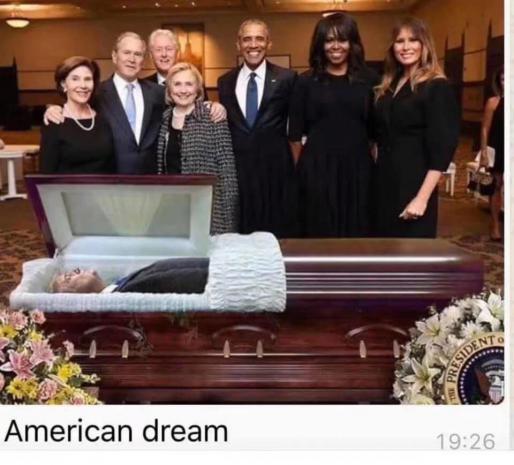 This is huge. Check this out from level-headed Martin Armstrong of Armstrong Economics... His letter to POTUS is attached.

Of course Martin doesn't mentioned the counterattack, the white hats operation taking place right now. As I mentioned to some of you, Google has been declared a "utility" during this national emergency, and the censor algos have been lifted. You can now search for most anything from the 1960s assassinations, OKC bombing, 9/11 Truth, Boston Marathon bombing, to Vaccines Damage, Gardasil Injuries, autism and vaccines, and so much more. Do understand that Google Images and YouTube is open now, but that the Google Search rankings will rise with many of the buried stories and posting to rise in the coming weeks. Google became unclocked on St. Patricks Day, which I confirmed with ex-Google engineer and whistleblower Zach Vorhies. Go try for yourself on all those blocked vaccine injury searches in the past.

Google is Unlocked and Uncensored. This means once "conspiracy theories" are now becoming "conspiracy facts."

Staged International Coup by the Left

I've copied and pasted a few posts along with a second letter to Trump that Mr. Armstrong wrote if you feel so inclined - please spread it far and wide.

I do not know Armstrong, I just follow his blog as he is the only one I know that is connected to high level finance/govt intel, extremely experienced in real world economics and smart enough to out all the economic pieces together on a global scale.

REPLY: This is a photo running around among the Democrats, cheering the destruction of the economy, for they are counting on this to overthrow Trump. But this does not stop there. This is a coordinated effort by the left to also overthrow Merkel and force the capitulation of Germany and its long-held policy against inflation. They have succeeded in breaking the will of Germany as Merkel has thrown in the towel. The Deep State has been trying to overthrow Trump desperately. What the WHO and the CDC have orchestrated is beyond belief.

They have put out these scenarios to justify destroying the economy under the claim there will not be enough beds to help people. China built hospitals to handle it in days. The WHO and CDC have chosen to destroy the economy rather than expand hospital capacity. I am sorry, but no one in their right mind would have done this. I am sorry, but all the information I am getting from direct sources are starting to paint this as a political coup on an international level. The climate change was just running into too much resistance so they needed another approach. Everyone knows I hate conspiracy theories based on just speculation. Even Diane Feinstein and others sold their investments with the turn of the ECM, including bonds! I know of high-level Europeans who did the same.

https://www.armstrongeconomics.com/international-news/politics/trudeau-joins-the-international-coup/
The worldwide plot of the left to effectively overthrow Democracy is alive and well in Canada as well. The emergency bill introduced by Trudeau would grant cabinet sweeping powers to tax and spend without parliamentary approval through the end of 2021. In other words, Trudeau is using this manufactured crisis to eliminate democracy in Canada altogether.

The coup that has been waged from the left against the right is an all-out global political war. They succeeded in bringing Germany to its knees and surrender its culture of austerity. Here in the United States, the Democrats have coordinated with these dark forces seeking not only same-day registration to allow illegal aliens to vote and overrule actual working Americans, but tucked in their proposals we find the seeds to cancel US paper dollars as well which is the political agenda in Europe.

The Democrats are trying to use this economic collapse which is increasingly looking like it has been staged by the Deep State & the WHO of the United Nations to further the Marxist agenda because they know the system is collapsing. Therefore, as the markets crash, the Democrats include in their demands for a massive stimulus package the creation of a 'digital dollar' and the establishment of 'digital dollar wallets.' As I have warned, they will simply outlaw cryptocurrencies and probably take blockchain for themselves. This has been the covert agenda of the IMF for some time now.

Both Speaker Pelosi's 'Take Responsibility for Workers and Families Act' and the 'Financial Protections and Assistance for America's Consumers, States, Businesses, and Vulnerable Populations Act (H.R. 6321),' introduced by Chairwoman Maxine Waters of Financial Services Committee, have now introduced these concepts as a way of delivering the economic stimulus payments to U.S. citizens. Clearly, this would only delay helping people for it would take months to establish such a system. This only furthers the talk behind the curtain that this whole thing has been orchestrated to destroy the economy to overthrow Trump and Germany, and then in the darkest of hours, the people will surrender all remaining rights to be safe.

This plot thickens as it reaks with corruption and a political coup by the left on a grand scale. They have been toasting the market collapse. If anyone wondered why Socrates has projected that China will emerge as the financial capital of the world, I don't think we have to wonder why much longer.

Second letter to Trump is copied and pasted below (also PDF)
Please send out to anyone that can use the info to understand what is at stake and who can effect change. 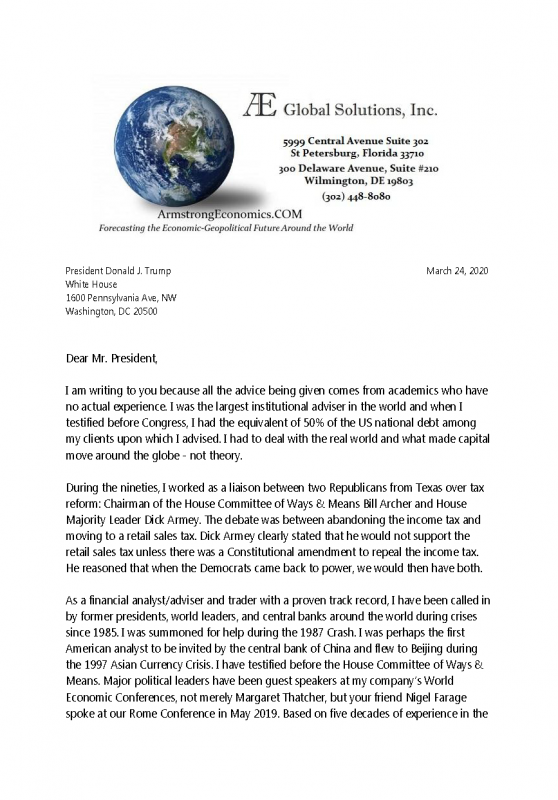 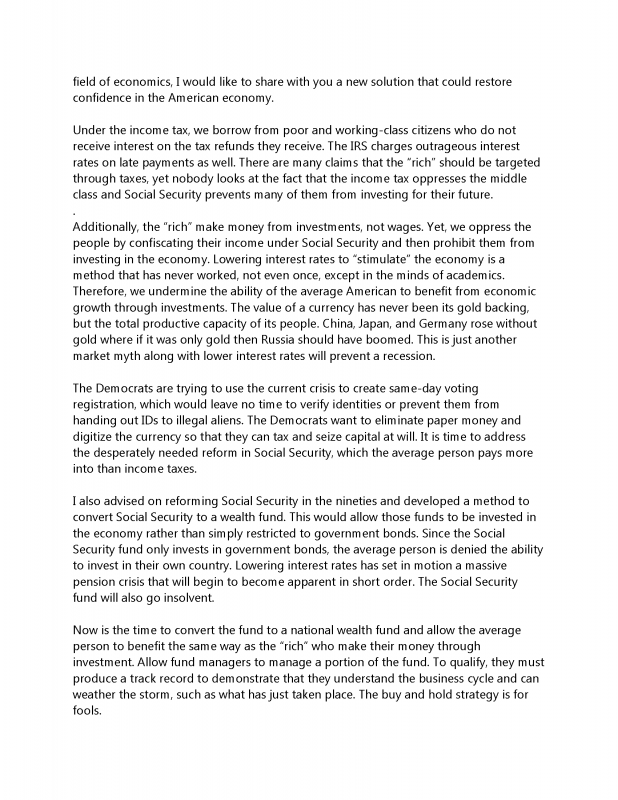 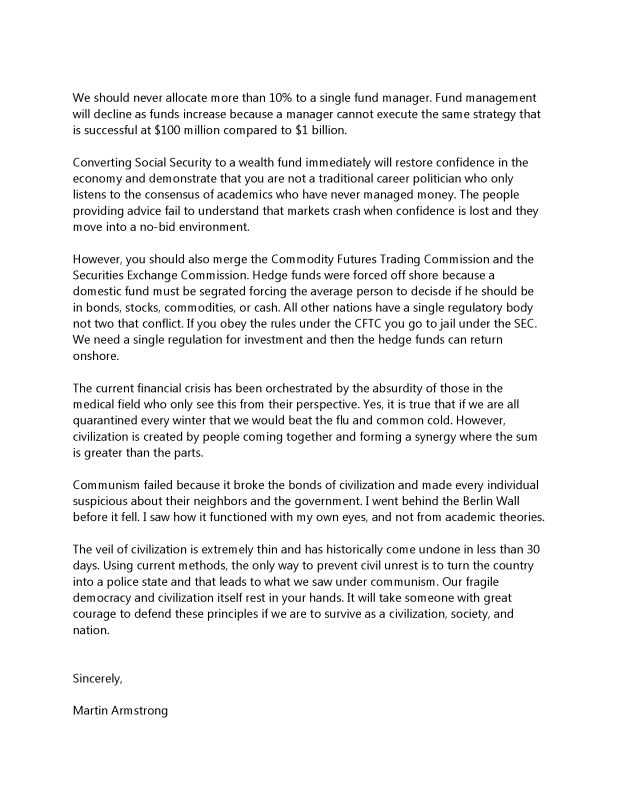 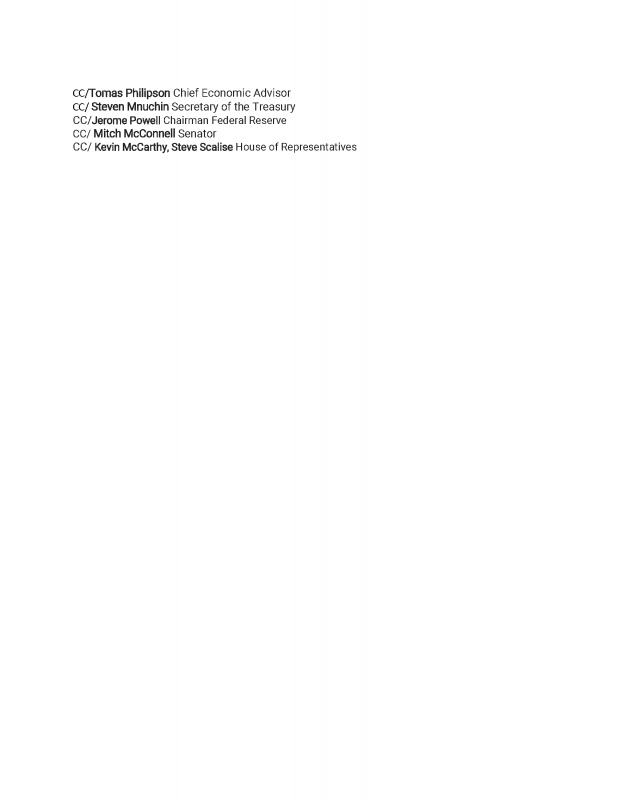