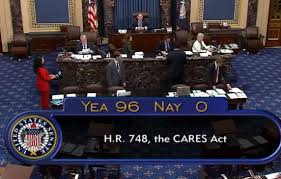 On Wednesday, the CARES (Coronavirus Aid, Relief, and Economic Security) Act was unanimously passed by the Senate.

It's scheduled to be voted on and adopted by House members on Friday, Trump to sign it into law. Its provisions are largely what was discussed in a previous day article.

There's plenty in it for monied interests, along with the Wall Street owned and operated Fed supplying trillions of dollars in virtually free money to banks, other corporate interests, hedge funds, and large investors —  more to come as needed.

By comparison, ordinary Americans get peanuts. Households will get one-time direct deposits of $1,200, married couples to get $2,400, plus an additional $500 per child.

Unemployed workers will get $600 weekly for four months — through July 31.

So-called Pandemic Unemployment Assistance will provide up to 39 weeks of unemployment insurance payments to individuals not otherwise eligible to receive benefits — including the self-employed and others who exhausted their regular and extended benefits.

The bill provides 13 weeks of emergency unemployment insurance for individuals who remain unemployed after they exhausted their benefits and aren't otherwise eligible for them.

A four-member household, including two children, will get a one-time payment of $3,400, a single individual $1,200 + $600 weekly if unemployed through July 31 in both examples.

Federal unemployment benefits are in addition what individual states provide.

According to the US Bureau of Labor Statistics, average pre-tax household income in 2017 was $73,573, average annual expenses around $60,000.

The average federal income tax rate is around 20%, after-tax income less than $59,000 — minus state, property, and other local taxes, meaning most households spend borrowed money on top of income to cover expenses.

Individuals are permitted to delay payment of payroll taxes until 2021 or 2022. The same holds for eligible businesses as follows:

Will unpaid business payroll taxes be treated the same way? Looking ahead, what hasn't been paid may not be when companies begin emerging from ongoing economic and financial duress.

Dems, including self-styled progressive Bernie Sanders, agreed to suspend business payroll taxes that's all about weakening Social Security and Medicare trust funds — part of a longterm plan to erode and eliminate them.

He and other Dems agreed to provide business with the lion's share of benefits, instead of demanding more for American households, including government provided healthcare for hospitalized COVID-19 patients, excluding what covered by insurers.

His voting record shows otherwise, including on Wednesday by supporting the so-called CARES Act.

On Tuesday, Politico reported that the Trump regime temporarily "stopped seizing the wages, tax refunds and Social Security benefits of people who are in default on their federal student loans," citing an unnamed Education Department source.

Through federally controlled Fannie Mae and Freddie Mac, as well as perhaps the entire mortgage industry, unemployed homeowners may also get temporary payment relief if qualify, permitting reduced or suspended payments for a fixed period.

According to Federal Housing Finance Agency director Mark Calabria, "(t)hat forbearance is up to 12 months, depending on their particular situation," adding:

Homeowners "need to contact their servicer…the lender that they send the check to every month."

"That lender will work with them to be able to work out a payment plan. Obviously, we hope to get them back on their feet as soon as possible."

The above is not debt forgiveness. Loan obligations will be extended for the period of reduced or suspended payments.

A plan for renters is needed. While many municipalities halted evictions of individuals unable to pay landlords, there's no federal program that authorizes reduced or suspended payments during the current economic and public health crisis.

Companies receiving bailout help are prohibited from making stock buybacks for the term of the amount provided plus an additional year.

Dividends, capital distributions, and executive bonuses are to be suspended for the same period.

How closely this will be monitored and whether actions will be taken against violators is another matter entirely.

Health insurers are required to cover the cost of COVID-19 tests. The same goes for vaccines when available.

Testing is supposed to be available for everyone in need. Americans are on their own for treatment of all health issues, including COVID-19.

Even federally mandated free healthcare for seniors that began in the mid-1960s when Medicare was established is longer free, especially because supplementary insurance is needed for what Medicare doesn't cover.

The city has 11,000 ventilators to help severely affected patients breathe. Around 30,000 are needed, likely many more in the days and weeks ahead.

NY Gov. Cuomo slammed the CARES Act, calling $3.8 billion in NY aid a "drop in the bucket" with around $15 billion needed at this time.

Economically and health-wise nationwide, things are likely to get much worse before improving.