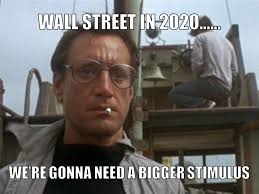 Make no mistake. Legislation that should be called the GOP/Dem-Don't-Care/CARES (Coronavirus Aid, Relief, and Economic Security) Act is a corporate bailout bill with crumbs for ordinary Americans.

It's a bandaid approach to a public health emergency/economic crisis, the latter mostly harming the vast majority of ordinary Americans.

Well-managed companies will survive. Mismanaged ones like Boeing, the airlines, and others should be allowed to go bankrupt — their operations considered essential nationalized and run by the government, free from market considerations, focusing solely on the public interest.

Republicans and Dems failed to prioritize what's most important in the current environment.

All the money in the world thrown at corporate America won't help a bit if spreading/highly infectious COVID-19 outbreaks aren't contained.

Public and personal health alone should be prioritized. The economy can wait. Without healthy employees and customers, businesses can't operate.

If infections keep spreading and most people remain fearful of resuming normal activities, stores and restaurants will stay empty if reopened.

The same goes for airports, train stations, bus terminals, and other public spaces, including sports venues, if most people remain hunkered down to stay safe.

The July Tokyo Olympics was cancelled. So is the remainder of the current NBA and NHL seasons, most likely, that have yet to be formally announced. Suspending games was likely prelude to cancelling remaining ones.

MLB and NFL games may be affected the same way. As things now stand, few people want to be around others in public, except for family members because of the risk of spreading infections.

That's not how Congress and the Trump regime are addressing the COVID-19 crisis.

It's growing more serious daily, the US on the cusp of overtaking China with the most infections.

The duration and severity of the public health and economic crisis are unknown.

It's clear that neither will disappear quickly. There are already over half a million confirmed cases globally, over 85,000 US cases, around 16,000 new ones reported in the last 24 hours, numbers rising steadily.

Compared to 38 million US flu cases this season, that runs from October to May, 390,000 hospitalizations, and 23,000 deaths, numbers of COVID-19 cases are minor by comparison except as follows:

The disease is a highly contagious new flu/influenza strain, no one with immunity, and severe cases can cause painful death by suffocation — the elderly and others with weak immune systems most vulnerable, why it's better to be safe than sorry.

On Wednesday, the US Senate voted unanimously for the CARES Act business giveaway — Bernie Sanders supporting what his rhetoric opposed.

In a message to constituents he said the following disingenuously:

"(B)e assured that I am doing everything in my power in the US Senate to correct the completely unacceptable federal response to this crisis (sic)."

"(W)e must prioritize the health and economic wellbeing of Vermont's working families—particularly our most vulnerable community members—instead of handing over another welfare check or no-strings-attached bailout to corporate CEOs and bankers on Wall Street (sic)."

Let the record show he lied. He could have held up passage of the corporate giveaway but supported it instead — the latest example of his rhetoric going one way, his vote on the Senate floor another.

The measure includes delaying payment of individual payroll taxes until 2021 or 2022. The same holds for eligible businesses as follows:

Dems, including self-styled progressive Bernie Sanders, agreed to suspend payment of worker and business payroll taxes that's all about weakening Social Security and Medicare trust funds — part of a longterm plan to erode and eliminate them.

In fairness, he has lots of company in both houses with nary a true blue profile in courage in Washington on all issues mattering most.

A handful of House representatives partly uphold this standard — none in either house fully across the board since Cynthia McKinney served for a six terms until 2007.

Then, earlier, and now she defined and continues to define what progressive politics is all about.

No one in Congress approaches her stature — why corporate giveaways like the CARES Act easily become the law the land.

The same or similar outcome to the Senate's unanimous adoption is certain when House members vote Friday — Trump to sign into law what no responsible leader would tolerate.