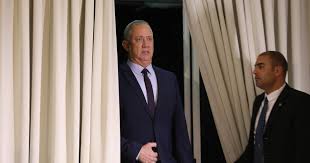 After rejecting Netanyahu's call for Likud-led unity government with him remaining prime minister for the next two years, Blue and White party leader Gantz accepted what Yesh Atid's Yair Lapid called "crawl(ing) into (his) government."

Representing the best chance to end Netanyahu's toxic tenure, he passed up his opportunity for a subordinate roll.

On Thursday, he agreed to unity government with Netanyahu remaining prime minister, Gantz to succeed him in September 2021.

He'll head the Netanyahu-led regime as Knesset speaker, elected to the post by its members.

He'll also may serve either as foreign or war minister. After vowing not to betray supporters, he yielded to a higher power who faces multiple criminal charges. See below.

Blue and White split over his move. On Thursday, the party dissolved, perhaps to be only a footnote in Israeli political history.

He "adopted extreme rightwing positions during his campaign, including support for a 'Jewish majority' and settlement annexation. He has now demonstrated that he is a clone of Netanyahu."

His election as Knesset speaker came a day after Netanyahu loyalist Yuli Edelstein resigned from the post to avoid holding a Supreme Court ordered vote for a new speaker by Wednesday.

On Monday, the High Court ruled unanimously for a Knesset vote to elect a successor to the post.

Most likely, a Gantz loyalist would have won it as Israeli president Rivlin tasked him with forming a new government.

The body "is not a cheerleader for the government," how Edelstein operated. "The Knesset is sovereign," Hayut stressed.

"It's hard to think of a more humiliating scenario for a party that began as an alternative to the corrupt and corrupting regime of Netanyahu and for its leader, a former military chief of staff, who was the first person in more than a decade to successfully challenge Netanyahu's rule," adding:

"Gantz chose to degrade himself and to crawl into Netanyahu's government."

The Netanyahu-led regime will continue going all-out "to chip away at the rule of law," replacing it with coup d'etat control.

His goal is avoiding trial on charges of bribery, fraud, and breach of trust, along with remaining prime minister indefinitely.

Will he relinquish his post in September 2021 if he hasn't been tried, convicted, and sentenced to prison by then?

Given his contempt for the rule of law, he'll likely do whatever it takes to remain in power as long as possible — weak-kneed Gantz no match for him.

It took three indecisive elections from April 2019 to March 2020 for Netanyahu to stay on as prime minister — even though his Likud-led party won little more than a fourth of support from the Israeli electorate.

With Israel heading for full lockdown as COVID-19 cases exceed 3,000, it's unlikely that Netanyahu will be tried as long as crisis conditions exist.

His main goal is staying in power and out of prison.

As prime minister, he's in a position to maintain a state of emergency indefinitely — his stay-out-of-jail card, perhaps with no expiration date.