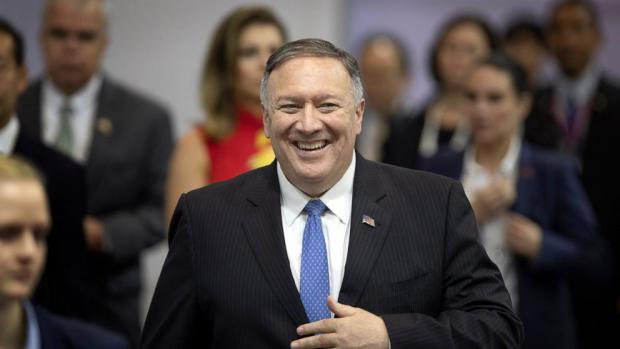 Pompeo never met a sovereign state not controlled by the US he didn't want smashed, never a law of war he didn't breach, never a peace and stability agenda he didn't abhor.

On all things Israel and Palestine,  he believes the Almighty is a real estate agent who bequeathed historic Palestine exclusively to Jews.

Now a beloved martyr, he was an anti-terrorist freedom fighter involved in aiding Iraq combat the scourge of US supported ISIS in Iraq.

Pompeo represents the worst of what imperial arrogance and destructiveness are all about, a hooligan masquerading as a diplomat with presidential ambitions, dictatorial ones no doubt.

Time and again, he takes dead aim against against sovereign nations he wants transformed into US vassal states — Iran and China two of his main targets.

On Tuesday, he raged against China and Iran together in the same outburst, supporting illegally imposed Trump regime sanctions on China-based Shanghai Saint Logistics for its legitimate dealings with Mahan Air, Iran's largest privately owned airline.

He falsely accused Mahan Air of "ferr(ying) weapons and terrorists around the world" for Iran — a bald-faced Big Lie, a longtime US specialty, not how the Middle East's leading promoter of peace and stability operates, the Islamic Republic.

Mahan Air operates legally. Accusations by the Trump and Obama regimes against the company turned truth on its head.

The firm and Iranian state have lawful relations with other nations and their enterprises, worlds apart from how the US and its corporate predators operate.

US claims otherwise are part of its war on humanity at home and abroad.

Iran and China are prime US targets for regime change. They're rising while the US is in decline because of its imperial arrogance and unwillingness to change.

On Wednesday, Pompeo upped the stakes against Iran by announcing more illegal sanctions and meaningless visa restrictions on 12 Iranian nationals and entities — for the crime of refusing to bend to Washington's will.

His announcement was accompanied by the obligatory litany of bald-faced Big Lies, similar ones used against all sovereign states on the US target list for regime change.

"Her courage and vision in leading Taiwan's vibrant democracy is an inspiration to the region and the world," adding:

"We have a shared vision for the region—one that includes rule of law, transparency, prosperity, and security for all."

"The…COVID-19 pandemic provided an opportunity for the international community to see why Taiwan's pandemic-response model is worthy of emulation."

"On 20 May, United States Secretary of State Pompeo issued a statement congratulating Taiwan's leader Tsai Ing-wen on her inauguration, to which the Ministry of Defense of the People's Republic of China expressed strong dissatisfaction and firm opposition."

"The question of Taiwan is an internal affair of China and concerns China's core interests and the national feelings of the 1.4 billion Chinese people, and no outside interference is allowed."

"We firmly oppose any form of official interaction and military ties between any country and Taiwan."

"We will never allow anyone, any organization, any political party, at any time, in any form, to split any piece of Chinese territory from China!"

"There is no way out for the foreigners to hold themselves hostage, and using Taiwan to control China is doomed to futility."

"The separatist forces of 'Taiwan independence' and their actions are contrary to national justice and will certainly be nailed to the pillar of shame in history."

"The Chinese People's Liberation Army has the firm will, full confidence and ability to thwart any form of external interference and secessionist attempts by 'Taiwan independence,' and will take all necessary measures to firmly defend the sovereignty and territorial integrity of the country and firmly maintain peace and stability in the Taiwan Strait."

Beijing's Defense Minister Wei Fenghe earlier said "China will take decisive steps regardless of the cost to preserve its territorial integrity and repel attempts to separate Taiwan from the country."

China considers Taiwan a breakaway province to be eventually reunited with the mainland like Hong Kong and Macau.

In the early 1980s under Deng Xiaoping, "(o)ne country, two systems" became official Beijing policy, part of its plan for eventual reunification with territories like Taiwan.

The US one China policy has been around for decades.

The (1992 Consensus) one China principle affirmed US recognition of one China comprised of the mainland and Taiwan.

The same thing applies to many others. Hostile US policies toward China may push things to confrontation one day.

As part of his reelection strategy, Trump falsely blames China for his own bungled policies.

Factbox: Where are people around the world protesting over George Floyd?