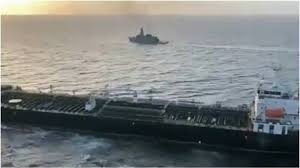 First of 5 Iranian Tankers Docks in Venezuela Without Incident

No nation may interfere in the right of other states to engage in international trade.

No nation may enact legislation, regulations, or take other actions that contravene international agreements, treaties, or a body of customs that comprise the UN Convention on Law of the Sea (UNCLOS).

High seas interdiction of nonthreatening vessels is what piracy is all about. UNCLOS defines it as follows:

"(a) any illegal acts of violence or detention, or any act of depredation, committed for private ends by the crew or the passengers of a private ship or a private aircraft, and directed:

(ii) against a ship, aircraft, persons or property in a place outside the jurisdiction of any State;

(b) any act of voluntary participation in the operation of a ship or of an aircraft with knowledge of facts making it a pirate ship or aircraft;

(c) any act of inciting or of intentionally facilitating an act described in subparagraph (a) or (b)."

Under UNCLOS, world community nations are obligated to act against pirate actions.

They have universal jurisdiction on the high seas to seize pirated vessels, arrest responsible parties, and detain them for prosecution.

On Sunday, the first of 5 Iranian tankers docked at the Venezuelan port city of El Palito.

"Iranian gasoline reaching Venezuela is a landmark in the struggle for sovereignty, independence, and peace."

"Trump and his minions are thinking of a military attack against the tankers amidst the pandemic. His experts advise(d) him otherwise."

"A group of 14 (retired) experts of the US intelligence community sent an open letter to Trump alerting him against a military attack on Iranian tankers with gasoline en route to Venezuela. They argue that the act of war does not serve US interests."

"It could trigger unpredictable responses in any part of the world; the language of "maximum pressure, all necessary means, and options are on the table."

"(W)armongering generals & advisers in Washington are playing with fire in a dangerous situation and exploiting Venezuelan extremists."

"They are seeking a war with Iran in the Middle East contrary to US interests."

"They've have attempted this many times in the past."

"Trump, Admiral Faller from the Southern Command, and the National Security Council are increasing tensions with threats that won't weaken President Maduro."

"(O)n the contrary, they will strengthen him while unifying the majority of Venezuelans against the aggressions."

"In their long experience in defending the US, they do not understand how could attacking legal trade between two countries that do not pose a national threat serve their own interests."

"Venezuelans, meanwhile, want no war either, but dialogue."

"Trump's policy thus far has been a failure and, even with the pandemic, it seems to have no chance of success in the near future."

"Avoiding a war resulting from the wrong advice of adventurers in Washington and Venezuela is the best option for the US."

The docked Iranian tanker carries a reported 1.53 million barrels of gasoline and alkylate.

According to Science Today, citing Toxicology Letter, alkylates "are a mix of high octane, low vapor pressure branched chain paraffinic hydrocarbons that can be made from crude oil through well established refinery processes, and are highly favored as streams for blending into gasoline."

It's used to produce premium, high octane, gasoline. Reportedly, the supply on board the first Iranian tanker will provide Venezuelan needs for around 50 days.

Much larger supplies are scheduled to arrive in Venezuela this week.

Despite Trump regime threats, suggesting possible high seas interdiction of Iranian tankers by Pentagon warships, no US action was taken so far.

The White didn't comment on the first tanker's arrival over the weekend.

What US designated puppet/usurper in waiting Guaido and pro-Western OAS secretary general Luis Almagro falsely called an "unacceptable provocation" is free and fair trade between Iran and Venezuela as defined under UNCLOS.

Commenting on possible US interdiction of Iranian tankers, President Hassan Rouhani said "(i)f our oil tankers face problems in the Caribbean Sea or anywhere in the world by the Americans, they will face problems reciprocally."

IRGC Chief of Staff General Hossein Bagheri warned that "(w)e stand firm and decided to give the US an appropriate response for any miscalculation against the national interests of Iran."

Iranian Defense Minister General Amir Hatami said "our policy is fully clear and we have clearly announced that we will not tolerate any disturbance."

"The Americans and others know that we certainly do not hesitate to react to any such move and if the disturbances increase and continue, they will certainly face a firm response."

Reuters quoted an unnamed White House official, saying "we're looking at measures that can be taken."

No interference by the Trump regime against lawful trade between Iran and Venezuela by no means rules it out ahead.

Unlawful US war by other means rages against both countries and many others.

What's ongoing will likely escalate ahead, risking possible confrontation — because of US rage to transform all nations it doesn't control into vassal states.

That's the stuff that wars and related hostile actions are made of — what the US repeats time and again against one country after another.

Iran and Venezuela are prime targets because of their immense hydrocarbon resources the US seeks control over.

They've withstood US war by other means for decades — defending their sovereign territory and rights successfully.

Seeking peace, stability, and cooperative relations with other countries by their ruling authorities is worlds apart from US war on humanity — an unparalleled threat to its survival.