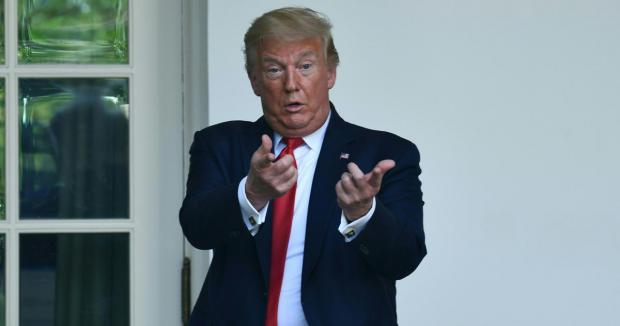 On Wednesday, Trump tweeted the following:

"We have informed both India and China that the United States is ready, willing and able to mediate or arbitrate their now raging border dispute."

He ignored longstanding US efforts to drive a stake through China/India relations, aiming to transform both countries into mortal enemies.

The US is no mediator. Hegemons seek conflicts and instability to advance their agenda.

Since the US recognized Israel in May 1948, established on stolen Palestinian land, it's involvement in "mediating" the conflict between them one-sidedly supported Jewish state interests at the expense of fundamental Palestinian rights.

To this day, notably under Trump, the US winks, nods or approves of continued Israeli land theft.

It's in DJT's no-peace/peace plan, showing his disdain for long-suffering Palestinians, the same true for his predecessors.

The US and Israel partner in each other's wars of aggression against non-threatening states, including three wars on Gaza since December 2008.

Whenever undertaken, so-called US "mediation" is all about serving its imperial interests at the expense of victimized nations, their people, democratic values, and the rule of law.

For decades, China and India disagreed about a line of control that separates one country from the other.

In 1962, both countries fought a month-long war over the border dispute, what neither one wants repeated.

The earlier conflict followed border incidents in the wake of the CIA backed Tibetan uprising after which India granted asylum to the Dalai Lama.

China and India share one of the world's longest borders (2,167 miles), referred to as the Line of Actual Control (LAC).

Parts of it are disputed, notably at Aksai Chin and India's Arunachal Pradesh state.

In 2013, a three-week standoff between forces of both countries ended when they signed a border defense cooperation agreement.

In 2016, Obama regime consul general in Kolkata (Calcutta) Craig Hall supported India's claim for territory China claims as its own.

At the time, Hall called for US/India joint infrastructure development, along with increased bilateral trade at China's expense.

His remarks supported Obama's Asia pivot, a diabolical scheme to advance Washington's military footprint in a part of the world not its own — part of US policy to weaken, contain and isolate China in the Indo/Pacific and worldwide.

Supporting India's territorial claim in its dispute with China is part of the US plot, wanting the Indo/US relationship strengthened as a counterweight to Beijing's growing political, economic, industrial, technological, and military prominence on the world stage — a major challenge to US hegemonic aims.

At the time, Beijing slammed US interference in its dispute with India, a Foreign Ministry statement saying:

"The boundary question between China and India bears on China's territorial sovereignty and Chinese people's sentiment."

"All third parties must respect the history and reality concerning the boundary question, respect efforts by China and India to solve territorial disputes through negotiations, not get involved in the disputes or take sides on issues relating to the ownership of disputed territory."

"Sound negotiations between China and India on the boundary question as well as peace and tranquility in the border areas over recent years have created favorable conditions for the growth of bilateral relations and their respective development."

The US under Trump has gone all-out to undermine China's development.

India rejects third-party involvement in one of the world's most intractable issues.

On Wednesday, China's envoy to India Sun Weidong said that the situation along the disputed border with India is "stable and controllable," adding:

"China and India pose no threats to each other. We need to see each other's developments in a correct way and enhance strategic mutual trusts."

Both countries "should be good neighbors of harmonious coexistence and good partners to move forward hand in hand."

China's Foreign Ministry spokesman Zhao Lijian said "(w)e have been following the important consensus reached by the two leaders (about) strictly observing the agreements between the two countries."

His remark referred to two President Xi Jinping/Modi discussions, both leaders agreeing to pursue more confidence building measures to maintain peace and stability along their border.

At the same time, both countries reinforced their military positions along the LAC.

Despite their longstanding border dispute, neither nation seeks military confrontation with the other.

The US is hostile toward all countries it doesn't control, notably China because of its growing prominence on the world stage.

Confrontation between Beijing and New Delhi would serve its interests.

Trump's mediation offer is a smokescreen fooling no one, notably not China.

It rejects unacceptable US interference in its internal affairs, what Trump's so-called offer is all about.