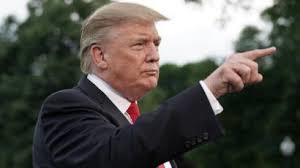 Trump Regime Escalates War by Other Means on Iran and China

The US under both right wings of its war party represents an unparalleled threat to world peace, stability, democratic values, and the rule of law.

As long as the world community fails to uphold UN Charter principles and other core international law, global war 3.0 might be just a matter of time.

In the thermonuclear age, the threat of potential armageddon looms large.

On Wednesday, Pompeo lashed out against Iran and China, his latest outburst against both countries.

When the Trump regime abandoned the JCPOA two years ago, breaching international law, the US unilaterally reimposed illegal sanctions on Iran — ignoring the unanimous International Court of Justice (ICJ) order against reimposition.

At the same time, the Trump regime granted waivers to several countries, including Iraq to import gas, electricity, and food products from Iran — as long as not bought with US dollars.

On Wednesday, Pompeo announced "the end of the sanctions waiver covering all remaining JCPOA-originating nuclear projects in Iran (sic)."

Iran's "nuclear projects" have no military component, a reality well known to the world community, including the US.

Countries involved with Iran commercially have 60 days to wind down their activities, according to Pompeo.

He announced sanctions on two Iranian officials connected to its legitimate nuclear program, falsely accusing them of "engaging or attempting to engage in activities that have materially contributed to, or pose a risk of materially contributing to, the proliferation of weapons of mass destruction (sic)."

No such activities exist. In its annual assessment of potential global threats, the US intelligence community refutes the notion of an Iranian nuclear weapons program.

Often it uses language to the effect that it doesn't know for sure that one doesn't exist, while stating that no evidence suggests it.

Without credible proof, claims otherwise are groundless. Virtually all Trump regime accusations against Iran and other nations on the US target list for regime change have no basis in fact.

Charges against them are invented, not real.

His latest outburst is all about wanting a stake driven through the JCPOA's heart by the Trump regime, wanting the landmark agreement eliminated — pre-JCPOA sanctions reimposed by the Security Council, an arms embargo on Iran maintained.

He told Congress that "Hong Kong does not continue to warrant treatment under United States laws in the same manner as US laws were applied to Hong Kong before July 1997," adding:

The Trump regime "stands with the people of Hong Kong (sic) as they struggle against (Beijing's) denial of the autonomy that they were promise (sic)."

Under the 1992 US-Hong Kong Policy Act, the city is treated separately from mainland China on matters relating to trade — its status likely to be revoked by the Trump regime on the phony pretext of Beijing's new national security law.

Heading for enactment in June, the measure is all about protecting China against threats to its national security that include secession, sedition, treason, and other subversive activities, as well as foreign interference and terrorism.

The measure's purpose is similar to legislation enacted by other countries, including the US.

Under the House and Senate unanimously adopted 2019 Hong Kong Human Rights and Democracy Act (sic), signed into law by Trump, the US breached the UN Charter by illegally meddling in China's internal affairs.

At the time, China's Global Times called the measure the "Support KH Violence Act," siding with thuggish rioters against the rule of law and rights of all city residents, opposing efforts by Hong Kong authorities to restore order, adding:

The bill "trampl(es) (on) the basic norms of international law and international relations," escalating US "cold war with China," what Beijing won't tolerate.

Its authorities may respond to the measure by "sanction(ing) (US officials who proposed the bill), restrict their entry into China, and investigate their interests in China."

Beijing may also "enact a 'blocking statute,' warning US authorities not to abuse or enforce the bill."

According to the measure, the White House must decide annually whether Hong Kong deserves special status separate from mainland China.

Pompeo's Wednesday announcement suggests likely harsh Trump regime actions ahead against Hong Kong, similar to its war on mainland China by other means.

The country's GDP today is around 40-fold greater than Hong Kong's, the city far less important economically than when returned to Beijing control in 1997 as a special administrative region under a one-country, two systems arrangement.

China's new national security law leaves its local autonomy unchanged, the measure aimed at protecting the entire country's sovereignty and territorial integrity from internal and external jeopardizing actions — the latter notably by the US.

It will have "no impact on Hong Kong's high degree of autonomy, the rights and freedoms of Hong Kong residents, or the legitimate rights and interests of foreign investors."

"As for foreign meddling in Hong Kong affairs, we will take necessary countermeasures in response."

Illegal Trump regime sanctions on Hong Kong and its authorities are likely coming, along with the threat of secondary sanctions against nations, entities, and individuals not abiding by what no one should accept.

If Trump regime war on Hong Kong by other means occurs in response to China's national security law, Beijing will likely shift city financial operations to Shanghai and encourage enterprises operating in the city to follow suit.

The principle is supported by the UN Charter and other international law — what the US throughout the post-WW II period breached time and again.

The measure heads to a Standing Committee to prepare its actual details, a process likely to be completed in June.

Far and away, the US is the world's leading human rights abuser at home and abroad — by its preemptive hot wars, illegal sanctions wars, state terrorism, homeland police state laws, its world's largest global gulag prison system, along with killings and brutality against Black youths and other people of color by militarized state and local cops.

Yet on Wednesday, based on the phony US concern for human rights, congressionally approved legislation that calls for (unilaterally imposed illegal) US sanctions on China was sent to the White House for enactment into law.

The so-called Uighur Human Rights Act by a nation at war on Islam in multiple theaters, as well as immigrants of the wrong color or nationality, passed the House Wednesday with one dissenting vote.

In mid-May, it passed the Senate unanimously without a roll-call vote.

China's People's Daily slammed the measure, saying it "exposed the evil intention of the US…by distorting the facts (to contain) the development of China under the disguise of religion and human rights protection" the US doesn't give a hoot about.

"Xinjiang-related issues are not about human rights, ethnicity or religion, but about fighting violence, terrorism and separatism."

The US invents pretexts to target nations it doesn't control, China clearly in the eye of its generated storm.

Bilateral relations are likely to worsen ahead, increasing the possibility of confrontation between two nuclear powers.

Canada is a virtual appendage of US foreign policy. On Wednesday, a Canadian judge ruled in favor of extraditing Chinese tech giant Huawei's chief financial officer Sabrina Meng Wanzhou to the US — despite baseless Trump regime charges against her and the company.

Bowing to its pressure, Canadian authorities unlawfully arrested and detained her in December 2018 on phony charges.

After release from detention, she's been confined under house arrest, pending whether Canada would or would not extradite her to stand kangaroo court trial in the US — a guilt by accusation system against targeted individuals

The action against her and Huawei is all about wanting China's technological development undermined by the US, Canada allying with its agenda.

If Meng is unlawfully extradited to the US and prosecuted for the crime of successfully competing with US firms, China will no doubt retaliate in its own way at a time of its choosing.