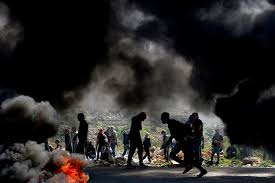 Since establishment of the Jewish state on stolen Palestinian land by committing high crimes of war and against humanity, the Times largely turned a blind eye to its most egregious abuses against a long-suffering people.

Times editors cited the bogus Israeli claim that annexation of Palestinian land is lawful because no Palestinian state exists, a notion with no credibility.

It established "the Provisional Government for the State of Palestine," Boyle explained, adding:

It "provides that all Palestinians living around the world automatically become citizens of the State of Palestine."

All that's needed for Palestinian statehood to be internationally recognized is for the PLO to invoke the 1950 Uniting for Peace Resolution 377, what the Security Council cannot override.

The Times acknowledged that settlements are illegal under international law, an indisputable fact.

The greater issue was and remains the establishment of a Jewish state by mass slaughtering and expelling indigenous Palestinians from their homeland.

Under international law enforced to the letter, the State of Israel has no legitimacy.

In 1948, its rampaging forces stole 78% of historic Palestine, effectively taking the rest in June 1967, including Jerusalem, an international city, the capital of none.

Over a half century of illegal Israeli occupation, including the transformation of Gaza into the world's largest open-air prison, created untenable conditions for millions of Palestinians.

Their vicious persecution at the hands of a ruthless occupier has gotten short shrift by the Times and other establishment media since the 1948 Nakba.

Saying settlements are "an obstacle to peace…(O)wnership should be resolved in the context of a peace settlement" ignores what's pure fantasy.

No credible peace process ever existed, clearly none now or ahead, just the illusion of what I've called the greatest hoax in modern memory, along with the war OF terror, not on it.

Historic Palestine already is what the Times called "a patchwork of simmering, unstable Bantustans," falsely claiming that's what annexation would cause, what would make the current untenable situation much worse.

Israeli imposed horrors existed for decades, worsened by endless exclusive Jewish development at the expense of ethnically cleansed Palestinians from their own land.

Netanyahu is the latest in a long line of anti-Palestinian prime ministers, contemptuous of their rights, brutalizing them with impunity because of world community and establishment media indifference toward what's gone on throughout the entire lifetimes of most people everywhere.

There never was a chance for a two-state solution because the US and Israel reject the idea — other than the illusion of a Palestinian state on isolated cantons, their people denied all rights affirmed under international law.

Both countries operate extrajudicially, their own destructive rules replacing the rule of law.

Both pursue a permanent state of war — the US worldwide, Israel regionally, including against Jews for justice internally and abroad, notably by wanting BDS criminalized — the right of free expression to denounce its high crimes.

The Times and other establishment media never explain that every day is Kristallnacht in Occupied Palestine.

Slow-motion genocide exacts an unrelenting toll — under the radar in the US for sweeping it under the rug, ignoring grievous high crimes demanding accountability not forthcoming.

The above abuses are longstanding. What the 1917 Balfour Declaration initiated became the scourge of what Israeli police state rule is today — a menace to Jews and non-Jews alike.

What the Times and other establishment media suppress is what's most important for everyone to know — notably about how the scourge of US imperialism operates.

Israel is a junior partner. The same goes for other NATO countries and others in league with the US imperial project.

Instead of denouncing the wounds on humanity it inflicts, the Times and other major media support its high crimes of war and against humanity.

They include longstanding horrors imposed by Israel on long-suffering Palestinians.

On Monday, Pompeo threatened the ICC over probes, if undertaken, of US and Israeli war crimes, saying:

"You'll see in the coming days a series of announcements not just from the State Department, (but) from all across the United States government that attempt to push back against what the ICC is up to."

Since established, the international court that's mandated to prosecute individuals for crimes of war, aggression, against humanity, and genocide exclusively targeted individuals in countries victimized by US-led Western high crimes, never the perpetrators.

The 2002 American Service Members' Protection Act (ASPA, aka The Hague Invasion Act) "protect(s) United States military personnel and other elected and appointed officials of the United States government against criminal prosecution by an international court to which the United States is not party."

It authorizes the president to use "all means necessary and appropriate to bring about the release of any US or allied personnel being detained or imprisoned by, on behalf of, or at the request of the International Criminal Court."

By their standards, only US victims should be prosecuted for imperial crimes committed against them.