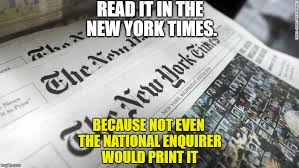 The NYT Finds New Ways to Disgrace Itself

Like other establishment media, the self-styled newspaper of record is a national disgrace — serving privileged interests over peace, equity, justice, and the rule of law.

Major media in the US and West are mouthpieces for wealth and power interests, contemptuous of the public welfare — why it's vital to support and follow reliable alternative sources of news, information, and analysis to stay informed.

In 1950, he said "(i)f the (television) craze continues…we are destined to have a nation of morons."

Jefferson called an educated citizenry "a vital requisite for our survival as a free people."

Madison warned that "(a) popular Government, without popular information, or the means of acquiring it, is but a prologue to a farce or a tragedy, or, perhaps both."

Long before television arrived in the late 1940s, columnist Walter Lippmann demeaned the public as "the bewildered herd," calling ordinary people "spectators, (not) participants" in matters of policy.

Public ignorance lets the nation's ruling class get away with mass murder, exploitation of most people, grand theft, and other high crimes.

Cotton and legions of likeminded hardliners in Washington support what made the US a pariah state, a belligerent state, a rogue state, a police state on a fast track for full blown tyranny.

Most violence was and continues to be committed by cops. It's unclear who else is involved.

Piles of red bricks, bottles, and other projectiles were discovered in US cities. Who delivered them? Who used them? What's planned by US dark forces?

Are peaceful protesters being wrongfully blamed for what appears to be organized violence?

It's a convenient pretext for US ruling authorities to institute greater hardline policies than now exist.

The road to full-blown US tyranny is paved with ill-intentions, its ruling class wanting unchallenged control domestically and abroad.

According to Cotton, protesters on city streets are "nihilist criminals…out for loot and the thrill of destruction, with cadres of left-wing radicals like antifa infiltrating protest marches to exploit Floyd's death for their own anarchic purposes."

America's criminal class operates from the White House, Capitol Hill, the Pentagon, the CIA, NSA, FBI, and other intelligence community headquarters, and other anti-populist government agencies, along with predation planned in corporate suites.

Cotton supports turning US streets and communities into war zones against the public welfare.

Militarizing them more than already would risk mass casualties, nonviolent protesters at greatest risk, a bad situation perhaps exploding if the likes of him get their way.

The Times is complicit with Cotton's extremism by featuring his call to arms against genuinely aggrieved Americans.

The vast majority on US streets are peacefully expressing their constitutional rights.

The worst possible way for authorities to deal with what's going on is by throwing more fuel on a burning inferno of justifiable rage against the dirty system.

Cotton and countless others like him in Washington are why the US is widely reviled worldwide, its unacceptable policies contributing to its decline.

On Wednesday, Trump regime war secretary Mark Esper surprised by opposing use of the 1807 Insurrection Act to deploy US combat troops on city streets, saying:

"The option to use active-duty forces in a law enforcement role should only be used as a matter of last resort and only in the most urgent and dire of situations."

"We are not in one of those situations now. I do not support invoking the Insurrection Act now" — his statement challenging Trump saying he might invoke the law.

His regime's earlier war secretary James Mattis denounced what he called DJT's "bizarre photo-op" in front of a Lafayette Square church — after peaceful protesters outside the White House were violently cleared by tear gas to make way for him, an outrageous action.

"You got national guard in the states they can activate. I know there are instances in the past where they've had to call up active-duty personnel, but I think the goal always is to de-escalate, not escalate."

"So my view is that's the right call." The Pentagon should "stay out of" what's going on in city streets.

Many thousands of them nationwide are protesting peacefully against pent up grievances.

It continues with no end of it in prospect without transformational change not forthcoming that requires sustained mass activism nationwide with no letup.

It's always the right time to take to the streets for long denied equity and justice — wrongs supported by extremist politicians like Cotton and establishment media like the NYT.

It's the only chance for positive change. There's no other way.