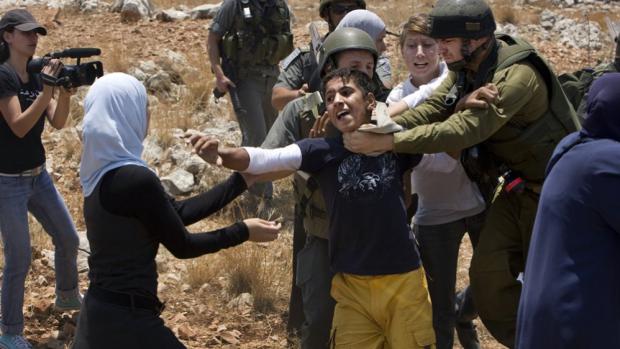 Israeli soldiers are ordered to create disorder in Palestinian communities, not maintain order for its residents.

They're authorized to use live fire on defenseless Palestinians based on invented pretexts because legitimate ones don't exist.

They also vandalize Palestinian property at their discretion.

Make no mistake. Actions by Israeli soldiers are authorized at the highest political and military levels of ruling regimes, Netanyahu exceeding the worst of his predecessors.

In late May, B'Tselem reported that Israeli soldiers are using water tanks atop Kafr Qadum village homes for target practice — shooting holes to drain them of vitally needed water.

B'Tselem: Because of repressive Israeli policies overall, "Palestinians in the West Bank suffer severe water shortages and an irregular supply."

"To alleviate the hardship, residents place water tanks with volumes of 500 or 1,000 liters on their roofs to stock water during supply hours, for use during the many hours when there is no running water."

Live fire results in hundreds of liters of lost water. Since April 24 village water tanks were vandalized this way. some multiple times — one of many examples of Ziofascist repression of defenseless Palestinians.

Even during COVID-19 outbreaks when frequent handwashing is important to prevent infections from spreading, Israeli war on village water tanks continues unabated.

B'Tselem: "This indicates that rather than the random initiative of a particular soldier, this conduct (is either) condoned by  commanders on the ground (or ordered by them), in blatant disregard for residents' lives and property."

Below is what a village resident said about holes shot in his rooftop water tank:

"During the protest and the clashes with the soldiers, who were waiting for the protestors, I was at home with my wife and sons."

"Every now and then we heard live fire and the sound of 'rubber' bullets and tear-gas canisters being shot."

"Meanwhile, I also heard shooting coming from the hill behind our house, about 200 meters away."

"After a few moments, I heard water flowing from the roof into the courtyard through the drainpipes."

"Since the soldiers were still up on the hill, I was scared to go up to the roof. I only closed the main water faucet, so the tanks wouldn't fill up."

"I waited for about an hour until the demonstration was over. When I was sure the soldiers were gone, I went up to the roof."

"I saw a hole in the plastic tank and temporarily fixed it by putting in a screw and adding adhesive material around it to seal the hole, but it's still leaking."

"We lost about 450 liters of water. Last year, the Israeli military also shot at our water tank and we were forced to replace it."

"Now, because of the coronavirus, we have to be especially careful about cleanliness."

"We have to shower, wash our clothes and wash our hands more often. It's also the water we use for cooking and drinking."

"I don't understand how the soldiers can be so heartless and damage water tanks like that. Water is the main source of life for every human being."

"Because of the coronavirus, it's now harder to travel between the villages."

"In any case, the stores selling plastic tanks in the neighboring villages are closed. The repair I made is only temporary."

"I'll have to buy a new water tank and the cost of buying and assembling it is 500 shekels."

Other village residents told similar stories of live fire by Israeli soldiers at their roof top water tanks to make them unusable.

Palestinians of all ages endure Israeli police state terror. There's no end of it in prospect because of world community indifference toward their long-suffering people at the hands of a ruthless occupier.

Separately, B'Tselem accused Israeli police of "engag(ing) in a campaign of abuse and collective punishment against the neighborhood of al-'Esawiyah in East Jerusalem" — terrorizing its 22,000 residents.

The same things go on throughout the Occupied Territories, besieged Gazans suffering most.

B'Tselem explained that Al-'Esawiyah is one of the most abused West Bank/East Jerusalem neighborhoods.

Over 90% of its land was stolen for exclusive Jewish development and use.

B'Tselem: The village "land grab…robbed al-'Esawiyah's residents any chance of benefitting from their land, and it is one of the key factors for their poverty."

Homes are broken into, ransacked, minors arrested without warrants, and other police state tactics are used, wanting residents to leave so the entire village can be developed exclusively for Jews.

Ruling regimes use intimidation and terror tactics to drive Palestinians from their land throughout the Territories, "cement(ing) (their) superiority" over them by brute force.

I suppose if I had neighbors lobbing missiles on my neighborhood I would be making life difficult for the true perpetrators also, ...duh.