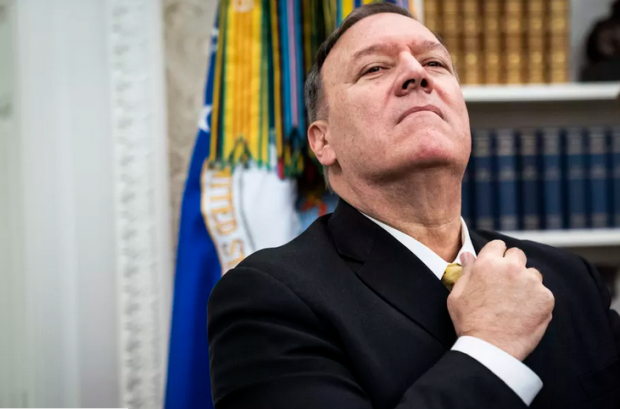 He's a menace to nations unwilling to suck up to US imperial aims for dominance over them, their resources and populations.

He's also a congenital liar. Take nothing he says at face value. As CIA director, he admitted the following:

"We lied. We cheated. We stole." Once a hardened criminal, always one.

On June 6 by State Department press release, he continued his his war of words on China.

Turning truth on its head, he falsely accused Beijing of "exploit(ing) George Floyd('s) death," an extraordinary perversion of reality even for him.

Ignoring US high crimes of war and against humanity at home and abroad, he lied calling orchestrated violence and vandalism in Hong Kong last year "peaceful protest(s)."

He ignored US dirty hands behind them. He lied about what happened in China's Tiananmen Square in June 1989, a US orchestrated false flag that failed. The massacre Washington wanted never happened.

He pretended that "rogue" cops face justice in the US — hardly ever, notably not for murder, rare exceptions proving the rule.

He defied reality, pretending that the US Constitution "protects property and liberty for all (sic)" and that the US press is "free (sic)."

He repeatedly reinvents history at home and abroad to conform to his extremist worldview.

He ignored the US global gulag prison system, its torture prisons in numerous countries, the world's largest by far — numbers entrapped in them far exceeding imprisonments in other countries.

They include thousands of political prisoners, most others for nonviolent offenses, notably for illicit drug possession and other misdemeanor-level offenses.

Claiming the US supports freedom and the rule of law is polar opposite how it's run.

Interviewed by the Daily Caller, he was over-the-top even for him, comparing China to Nazi Germany — while pretending the US is democratically run, what it never was from inception and surely isn't now with the likes of him and likeminded extremists infesting Washington.

In discussing the 76th June 4, 1944 D-Day anniversary, he ignored the lead role Soviet Russia played in liberating Europe from the scourge of Nazi Germany — the US and Britain junior partners to its monumental achievement.

It happened to prevent Soviet Russia from defeating and occupying Germany entirely, along with extending its influence throughout Western Europe.

Pompeo: "China…seeks to become the single, greatest world power, which, in a way, is comparable to Germany's actions during the Second World War."

The analogy is both absurd and hostile. Hitler waged war on Europe and North Africa.

China wages peace, at war against no other nation, threatening none.

Pompeo's analogy applies to the US — at war on humanity throughout most of the post-WW II period, an unparalleled menace to its survival.

Pompeo lied claiming China "made the decision to deny Hong Kong people the freedoms that they had been promised (sic)" — referring to its new national security law that's about securing the nation, not denying freedom to Hong Kongers or other Chinese citizens.

A growing breach exists between the US and China, the Trump regime bearing full responsibility for how wide it's gotten, Pompeo playing a key sinister role.

An enemy of peace and the rule of law, he supports endless wars of aggression and other hostile actions to further the US imperium by brute force.

He conceals Washington's aims and his own behind a litany of bald-faced Big Lies in public remarks and press releases.

An unindicted war criminal, he belongs behind bars, not in high office.

A whole lot of others like him infest the US executive and congressional branches no matter which right wing of the US war party in in power.

Their megalomaniacal rage for dominating other nations made today the most perilous time in world history — risking WW III by accident or design, transforming the US into a police state at the same time.