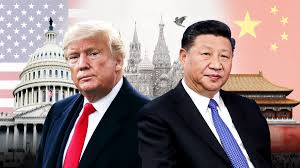 Reckless US hostility toward China risks eventual confrontation between both countries.

Unacceptable US policies toward Beijing reflect what the scourge of imperialism is all about.

What's short of hot war could cross that rubicon by accident or design given US rage to dominate other countries worldwide, wanting challenges to its hegemonic agenda eliminated.

To their shame, they operate as US vassal states, having long ago subordinated their sovereignty to its interests even when detrimental to their own — notably going along with its wars by hot and other means against nations targeted by Washington for regime change.

The group of 8 anti-China position has nothing to do with supporting the rule of law and other democratic values.

It's all about allying with Washington's anti-peace and stability agenda, along with its abhorrence of democracy, wanting it crushed wherever it exists.

The US-led alliance said the following:

"Democratic states (sic) must maintain the integrity of their political systems, and actively seek to preserve a marketplace of ideas free from distortion (sic)."

"A free, open, and rules-based international order that supports human dignity is created and maintained through intention (sic)."

"The persistence of such an order requires like-minded countries to participate actively in its governance and enforcement (sic)."

The group of 8's agenda is worlds apart from the following:

"Safeguarding (the) international rules-based order" they breach by allying with Washington's war on humanity.

"Upholding human rights" they consistently violate in cahoots with the US.

"Promoting trade fairness," a notion the US long ago abandoned.

"Strengthening security" at a time when the US, NATO, Israel, and their partners in imperial crimes pose the only international threat to everyone everywhere, including to their own citizens.

"Protecting national integrity," one of countless principles the US disrespects in dealings with other countries.

By bending to Washington's will, the group of 8 increased possible East-West conflict instead of uniting for peace and stability by denouncing wars by hot and other means, notably US aggression.

China is at peace with its neighbors and other nations worldwide, threatening none, pursuing cooperative relations with other countries.

Group of 8 co-chairs include US warmongering extremists Senators Marco Rubio and Robert Menendez.

They and likeminded alliance extremists rallied support for anti-China actions based on Big Lies.

A video message turned reality on its head, claiming:

"China…represents a global challenge (that) will define the next century (sic)."

"It is a challenge which touches all of us (sic)."

"This challenge will outlast governments and (ruling regimes), and it transcends party politics (sic)."

"What we once believed about China's rise, no longer corresponds to reality (sic)."

"We thought China would open up over time. This hasn't happened (sic)."

The above statement reads like language demanded and approved by Pompeo and likeminded warmongering loose cannons in Washington — a call to arms against China's development, wanting it undermined.

The group of 8 is unacceptably meddling in China's internal affairs, a breach of the UN Charter and other international law.

Beijing will no longer be bullied like what went on generations earlier.

"So this is the new Eight-Nation Alliance? Imperialism? Robbery? Theft? Corruption?"

"Have you returned everything you…stole from other countries, including China," over centuries of exploiting the East and global South by the predatory West?

The US orchestrated initiative is all about wanting China's development undermined, part of what Washington's imperial project is all about.

The so-called China threat is invented, not real, the real menace headquartered in Washington with branch offices in Europe, Tel Aviv, Tokyo, Riyadh, and elsewhere.

A US-orchestrated anti-China Cold War rages, ignoring the risk of it turning hot.

Countries allying with Washington's agenda have themselves to blame, serving the interests of a higher power at the expense of their sovereign rights.