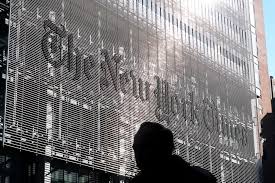 Raging against constitutionally guaranteed free expression, public assembly, and right to petition government for redress of grievances, he called for "send(ing) in the troops" against them.

Since nationwide protests began after four Minneapolis cops killed African American George Floyd on May 25, most violence in the streets was committed by police and unclear elements.

The vast majority of demonstrators have been peaceful.

Hundreds of Times' staffers expressed opposition to the unacceptable op-ed.

Dozens staged a sickout, protesting against Bennet OK'ing it for publication, giving the publication a black eye on top of many others.

Bennet made a bad situation worse by tweeting:

"Times Opinion owes it to our readers to show them counter-arguments, particularly those made by people in a position to set policy."

Publishing a commentary in favor of militarizing US streets to quash fundamental constitutional rights showed editorial board support for what's unacceptable.

The furor he and Cotton created left mud on the Times' face piled atop countless amounts more over its support for endless wars and privileged interests at the expense of world peace and the public welfare.

Letting Bennet resign was a euphemism for pushing him out that won't end the furor over what happened.

How many countless others are OK?

It's standard practice by the self-styled newspaper of record, on the wrong side of major domestic and geopolitical issues in daily editions.

Sulzberger added that he and Bennet "concluded that James would not be able to lead the (editorial) team" going forward.

Who is establishment figure James Bennet?

As Times editorial page editor during the US 2016 presidential campaign, he was a key figure at the broadsheet behind the Big Lie about Russian US election meddling that never happened — manufactured by Obama regime CIA director John Brennan and Hillary's campaign.

To its disgrace, the Times virtually operated as her press agent throughout the process.

Bennet played a key role in assuring supportive editorial content while demeaning Trump for the wrong reasons, not the right ones, along with unjustifiably bashing Russia and other countries independent from US control with Big Lies.

Bennet's father Douglas (1938 - 2018) was a longstanding Dem party establishment figure, serving in various diplomatic posts, later as USAID head, a front organization for the US intelligence community's global campaign to advance its imperium.

James Bennet's older brother Michael is US senator from Colorado. From 2013 - 2015, he chaired the Dem Senatorial Campaign Committee.

At the Times, Bennet earlier served as White House correspondent and bureau chief in Jerusalem to promote Israeli interests over fundamental Palestinian rights.

From 2006 - 2016, he was editor-in-chief of The Atlantic before returning to the Times as editorial page editor, considered a stepping stone up the broadsheet's executive ladder.

On Sunday, Bennet ended his Times tenure. He'll likely resurface in another editorial capacity to spread poisonous content over journalism the way it's supposed to be.

On Saturday, he tweeted that he "oversaw the acceptance and review of the Cotton op-ed," adding:

"The fault here should be directed at the @nytopinion leadership team."

Left unexplained was how many of its "faults" are too many.

Ignoring his unacceptable militancy, Cotton claimed he was misunderstood. His hostile rhetoric made clear where he stands.

According to an unnamed senior White House official, he wanted to deploy 10,000 Pentagon combat troops to halt Washington, DC protests.

Reportedly US 82nd airborne division troops were on standby to enter the city but weren't deployed.

According to Army Secretary Ryan McCarthy, "we came right up to the edge" of sending them in.

Abhorrence of Truth and Full Disclosure in Reporting

The NYT: Proliferator of Fake News Over Hard Truths