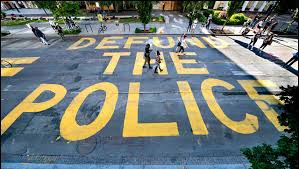 Defund or Disband Police? What About the Pentagon, CIA, NSA, US Gulag, and Wall Street Owned Fed, Etc!

Indeed police killings, brutality, and its other unacceptable practices against America's most disadvantaged are a major societal problem needing correction.

Cutting its funding or even replacing it with an alternate societal control system won't fix things.

The problem isn't cops. It's power elites controlling them.

It's state-sponsored inequity and injustice, privileged interests served exclusively at the expense of exploiting most others domestically and abroad.

US instruments of control go way beyond state and local police.

The Wall Street owned and controlled Fed has supreme power over all others by controlling the nation's money, credit, debt, and ability to manipulate markets for private enrichment.

In his book titled "Tragedy and Hope," historian Carroll Quigley explained the following:

"(T)he powers of financial capitalism (can) create a world system of financial control in private hands able to dominate the political system of each country and the economy of the world as a whole," adding:

"This system (is) controlled…by the central banks of the world, acting in concert, by secret agreements arrived at in frequent private meetings and conferences."

Former Bank of England director Josiah Stamp said "(b)anking was conceived in iniquity and was born in sin," adding:

"The bankers own the earth. Take it away from them, but leave them the power to create money, and with the flick of the pen they will create enough deposits to buy it back again."

The Fed is a privately owned banking cartel by its major banks, able to create limitless amounts of money digitally.

The 16th Amendment let Congress levy an income tax so bankers given control of the nation's money by the 1913 Federal Reserve Act could be paid interest on the federal debt.

If money power was returned to public hands where it belongs, and swords were beaten into plowshares, creating a new era of peace, the federal income tax could be eliminated for most Americans, greatly reduced for others.

Government debt would be interest free or eliminated altogether.

Why not now? Because powerful bankers would lose what they value most.

The power to create money lets them rule the world unchallenged. If returned to public hands, they'd be powerless.

Funded by countless trillions of dollars poured down a black hole of unaccountable waste, fraud, and abuse, the Pentagon's global empire of bases involved in waging endless war on humanity is a far greater problem than police wrongdoing.

So is the CIA-led US intelligence community, a force for pure evil, not good.

JFK notably ordered all US military forces out of Vietnam by end of 1963, eliminated for wanting peace over aggression against a nation threatening no one.

He despised the CIA, wanting it "splinter(red) into a thousand pieces and scatter(ed) into the wind."

His transformation from warrior to peacemaker cost him his life. It cost the lives of millions of Southeast Asians and thousands of Americans from a decade of US aggression — ongoing endlessly today in multiple theaters.

Ironically, ground-breaking for Pentagon construction began on another 9/11 in 1944 — what became headquarters for orchestrating endless wars on humanity worldwide, resulting in tens of millions of lost lives.

Cops in the US terrorize society's most disadvantaged of all races.

The US gulag prison system, the world's largest by far, symbolizes systemic injustice.

Most inmates are poor Blacks and Latinos, mostly for nonviolent crimes, illicit drug possession the most common one.

Countless numbers behind bars are for what amounts to misdemeanor offenses, many wrongfully blamed for things they had nothing to do with, including on death row.

America's obsession to incarcerate targets society's most vulnerable and others for supporting ethnic justice, racial emancipation, and political, economic and social equality across gender and color lines — political prisoners languishing behind bars.

Immigrants from the "wrong countries" of the wrong faith are hunted down, rounded up, denied bail, dehumanized, and unjustly punished with no right of appeal.

What should be a national scandal and denounced gets scant public attention.

The same goes for US torture prisons, operating globally, at home and abroad — filled with political prisoners of the wrong faith, color and nationality, unjustly considered terrorists.

What's gone on for time immemorial, torture became official US policy under Bush/Cheney, continued under the radar to this day with no end of it in prospect, a high crime against humanity getting no public attention.

Like most of his predecessors, notably the Clintons, Bush/Cheney and Obama, he fronts for systemic dirty business as usual at home and abroad — the same to be true for whoever succeeds him in 2021 or 2025.

One-party rule with two anti-peace, equity, and justice right wings assures it — mirror images of each other on issues mattering most, serving privileged interests exclusively.

It's been the American way from inception with brief moments of positive change along the way — notably by New Deal, Fair Deal, and Great Society programs.

They greatly eroded since the neoliberal 90s, heading for elimination altogether to free up maximum funds for war on humanity at home and abroad, along with handouts to corporate America.

All of the above issues and related ones made the US a pariah state, a fantasy democracy, a notion it tolerates nowhere, especially not domestically.

They're symbolic of societal injustice, not the root cause.

Defunding or disbanding police in one, a few, or larger numbers of US cities won't stop state-sponsored war on humanity, inequity, injustice, or institutionalized racism.

Only revolutionary change can transform a deeply corrupted system too debauched to fix any other way.

There's no other way, never been one before or looking ahead.

I've stressed many times that no nation historically caused more harm to more people over a longer duration than the US.

Throughout its history from inception, governance of, by, and for the privileged few has been and continues to be core US policy.

That's what the American way is all about — democracy for the privileged few by exploiting most others and plundering planet earth for maximum profit-making, the human toll ignored.

Humanity is held hostage to what Orwell called "a boot stamping on a human face — for ever!"