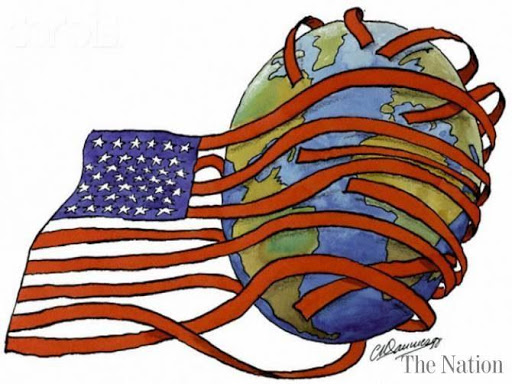 Bipartisan US national security strategy is all about advancing the nation's imperium globally.

Both right wings of the one-party state seek dominance over other nations, their resources and populations.

They want all sovereign independent countries not controlled by the US transformed into vassal states.

Their favored strategies are war by hot and other means, including state terrorism, extrajudicial sanctions, coup d'etats, assassinations, and other hostile actions.

US ruling authorities reflect what the scourge of imperial rage is all about.

Pursued by a nation with nukes, biological, chemical, and other banned weapons in its arsenal, as well as willingness to do whatever it takes to achieve its aims, the US represents an unparalleled threat to humanity's survival.

It comes at a time when the only foreign threats faced by the US are invented, not real — the true state of things for the past 75 years throughout the post-WW II period.

Yet the US has been and remains at war by hot and other means perpetually with no prospect for a new era of peace and stability.

The US ruling class operates extrajudicially domestically and abroad.

Wrapped in the American flag for cover, it perpetuates the myth of democratic governance, what hasn't existed in the US from inception and surely doesn't now.

The power of state-sponsored propaganda, pushed by establishment media, gets most people to believe almost anything pounded into their minds repeatedly.

Polls show it. Despite no threat to the US by China, Russia, and Iran, 2020 Gallup data show the following:

For Russia, it's 72%, only 28% of Americans viewing the country favorably.

Only 11% of US respondents polled by Gallup view Iran favorably, 88% unfavorably.

Yet the above three countries are at peace with their neighbors and other nations, at war with none, threatening none, and pursue cooperative relations regionally and worldwide.

It's 90% for Britain, 85% for Germany, 84% for France, along with positive US public sentiment for other US allies.

Only 23% of Americans view long-suffering Occupied Palestinians favorably, 47% for Cuba, 19% for Iraq, 18% for Afghanistan, and 12% for North Korea.

The above numbers reflect the power of US propaganda. Belligerent USA and its imperial allies are viewed favorably.

Nations on its target list for regime change or occupied by hostile forces got unfavorable to very unfavorable ratings.

Yet they pose no threat to the US or any other countries.

foreign policy that advances the interests of the American people at home and abroad" — by brute force and/or other means.

The strategy has everything to advancing the interests of America's privileged class, nothing serving ordinary people — exploited, not served, at home and abroad.

The plan was 18 months in the making.

Claiming to offer "over 130 solutions to counter America's most aggressive global adversaries" (that don't exist), it includes the "TOUGHEST SANCTIONS EVER PROPOSED by Congress" against China, Russia and Iran.

According to Johnson's hardline worldview, the "RSC National Security Strategy (shows) conservatives (sic) are making crystal clear to both our allies and adversaries that we are committed to standing for America's core principles of liberty, human rights, free markets and maintaining peace through strength, and against authoritarianism and aggression (sic)," adding:

"It's time for America to fully reclaim its role as the greatest force for good the world has ever known (sic)."

The above reinvented history conceals Washington's imperial rage for unchallenged global dominance by whatever it takes to achieve its diabolical objectives.

There's nothing remotely democratic or peaceful about Washington's permanent war on humanity, its greatest threat.

The hostile agenda pursued by both right wings of the one-party state may kill us all if not challenged and countered by the world community of nations opposed to endless wars.

The RSC proposal is a blueprint for Cold War 2.0 that could turn hot if pushed too far, a menacing possibility if hardliners in Washington get their way.

It calls for designating Russia a state sponsor of terrorism, how the US operates, not Russia, China, Iran, or other nations on Washington's target list for regime change.

It urges imposition of (illegal) sanctions on Russian oil and gas operations, as well as on other nations and enterprises involved with them.

It wants Russia, China, and Iran isolated and weakened, along with supporting efforts to replace their legitimate governments with pro-Western puppet rule.

Under Republicans and Dems alike, relations with these countries are dismal — even with Dem adoption of the JCPOA, what the Obama regime breached straightaway by imposing illegal sanctions on Iran for invented reasons.

It calls for "enforc(ing) sanctions on Iran and on countries that evade our sanctions to financially support the" country.

RSC chairman Johnson endorsed the measure. Turning reality on its head, he said the following:

"Iran has shown it will stop at nothing to circumvent US sanctions so it will have the funds to spread terrorism (sic), obtain nuclear weapons (sic), and threaten Israel (sic)."

Chances for adoption of HR 6015 and the RSC National Security Strategy measure are slim in an election year.

Policies supported by majority Senate Republicans are likely to be rejected by majority House Dems for political reasons — the same true by the GOP against their agenda.

Clearly both wings of the US one-party state are militantly hostile toward China, Russia, Iran, and other other sovereign independent states unwilling to subordinate their rights to US interests.

Specifically what depends on the outcome of November presidential and congressional elections.

Given the destructive power of today's super-weapons, humanity has a choice.

Beat them into plowshares or risk being consumed by them.