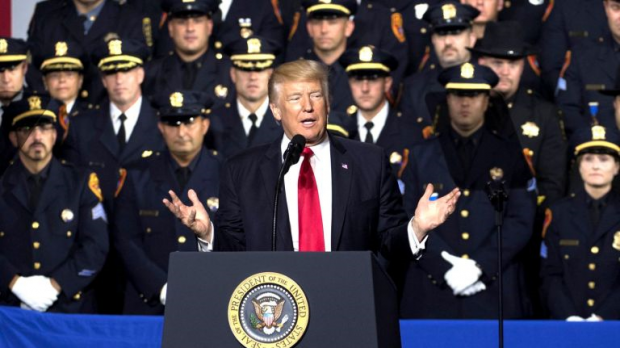 It's being prepared for release in the coming days. More on it below.

Throughout his tenure, Trump showed he's hostile to peace, the rule of law, and government serving everyone equitably.

In early February 2017, days after his inauguration, he signed what the White House called "pro-law and anti-crime executive orders (to) support the dedicated men and women of law enforcement."

Ignoring police violence that's part of the US landscape, including over 1,000 killings by cops in the country annually, Black youths a primary target, Trump said police "on the front lines…protect Americans…"

They serve and protect privileged ones at the expense of beneficial social change, he failed to explain.

Last October by executive order, he established a "Commission on Law Enforcement and the Administration of Justice (Commission)."

Its purpose is to address issues related to "law enforcement and the administration of justice…to prevent, reduce, and control crime."

The EO had nothing to do with crimes in high places by public, military, or private officials — everything to do with being tough on ordinary Americans, especially the most disadvantaged.

It's how US law enforcement always operates — unfair and unjust by design.

Police brutality in the US in longstanding and excessive, including a systematic pattern of abuses nationwide.

Little is done to monitor or constrain it. Driving while Black is criminalized all too often.

Racial profiling stops and searches for suspected possession of illicit drugs or other reasons largely target people of color.

The 1994 Violent Crime Control and Law Enforcement Act, including its police accountability section, failed to criminalize its use of violence, excessive force, or other human and civil rights violations.

The late Rep. John Conyers denounced a US "policy of institutionalized racial and ethnic profiling" that's gone on for generations.

The ACLU stressed how millions of "African American, Asian, Latino, South Asian, and" Muslims from the wrong countries are grievously harmed in America, adding:

A "major impediment to (stopping it) remains the continued unwillingness…of the US government to pass federal legislation (prohibiting all forms of police brutality) with binding effect on federal, state or local law enforcement."

US ruling authorities repeatedly and consistently breach international and constitutional law, including the 1994 UN Convention on the Elimination of All Forms of Racial Discrimination (ICERD).

A Trump regime statement on "law & justice" said it took steps "to restore the rule of law, forge new partnerships with state and local law enforcement agencies, encourage respect for officers nationwide, and adopt aggressive strategies" against challenges to the US system.

On June 8, Trump praised US police. Ignoring hundreds of complaints about police violence and other forms of abuse against peaceful protesters nationwide, he claimed "(t)hey've done a fantastic job (sic)."

"(T)here's not going to be any disbanding of our police. Our police have been letting us live in peace (sic)."

On US city streets in the aftermath of George Floyd's killing by 4 Minneapolis cops (and at all times in defending privilege over social justice nationwide), police use battlefield weapons designed for combat against unarmed people protesting against longstanding grievances.

On Thursday, Trump said his regime is preparing an executive order "that will encourage police departments nationwide to meet the most current professional standards for the use of force, including tactics for de-escalation," adding:

He supports use of law enforcement to "dominate the streets. And that means force, but force with compassion" — ignoring that they're incompatible.

Calling for "real strength, real power" on US streets shows where he stands, a prescription for continued law and order toughness unrestrained the way things have always been in the US.

In response to the establishment of an autonomous zone in Seattle by city residents, a six-square block area with no police, Trump threatened to send National Guard or Pentagon forces to disband the zone if state and city authorities don't do it on their own.

"What we will not allow are threats of military violence against Washingtonians coming from the White House."

"The US military serves to protect Americans, not the fragility of an insecure president."

"The Trump (regime)  knows what Washington needs right now - the resources to fight the COVID-19 pandemic."

"If the president wants to show leadership, and that he cares about the people in this state, he should send us the PPE we've needed for months" — but haven't gotten.

Nor have other US states gotten federal aid to contain COVID-19 outbreaks, including supplies of personal protective equipment (PPE).

The Seattle autonomous zone reflects justifiable anger against festering injustice in the US.

As long as longstanding grievances go unaddressed, the only recourse for ill-served people is taking to the streets against what's unacceptable.

Protests nationwide are the largest since the 1960s, aside from the Occupy Wall Street movement that began in September 2011 with considerable energy that waned and accomplished nothing.

Will this time be different? Will public anger on US streets against state-sponsored injustice have staying power?

Will they accomplish what earlier activism failed to achieve?

It's only possible by sustaining activism for social justice longterm.

With tens of millions of Americans out of work at a time of economic collapse, it's an ideal environment for taking to the streets and staying there until demands for social and economic justice are met legislatively.

Power yields nothing unless pushed nonviolently. Positive change never comes any other way.

Democrats Are Setting Up Trump To Frame Him, But THIS Argument Will Shut Anyone Down