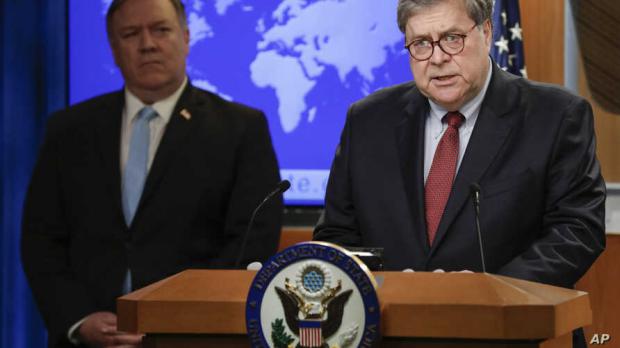 The US is guilty of high crimes of war and against humanity in all its wars against nations threatening no one — from preemptive war on North Korea to the present day in multiple theaters.

There's no ambiguity about what indisputable evidence shows.

The US faced no foreign threats throughout the post-WW II period — so it invented them to attack one nonbelligerent country after another.

Afghanistan, the Taliban, and Osama bin Laden had nothing to do with 9/11 — the mother of all state-sponsored false flags, a pretext for the US to smash one nation after another.

US new millennium forever wars rage against invented enemies with no prospect for resolution because Republicans and Dems reject world peace and the rule of law.

It's unclear what will come out of the International Criminal Court's probe of indisputable US war crimes in Afghanistan.

Since established by the Rome Statute in 2002, the ICC never held the US, other Western nations, or Israel accountable for high crimes of war and against humanity.

Only their victims were prosecuted, falsely blamed for the highest of high crimes committed against them by the US, NATO, Israel, and their imperial partners.

Though mandated to prosecute individuals (not nations) for crimes of war, against humanity, genocide and aggression, the court never targeted the main offenders of these crimes.

Given its disturbing history, it requires a giant leap of faith to believe it will go where it never went before.

It's got a lot of proving to do to convince skeptics of its intention to go another way.

In early March, ICC judges authorized an investigation into accusations of war crimes by US military and intelligence personnel, Afghan forces, and the Taliban in the country.

According to Judge Piotr Hofmanski, chief prosecutor Fatou Bensouda "is authorized to commence investigation in relation to alleged crimes committed on the territory of Afghanistan in the period since 1 May 2003."

US war on the country was planned six months or longer before 9/11.

On the shelf ready to go, it was launched less than 5 weeks after that fateful day.

Many months of planning precede all US wars, nothing impromptu about them.

At the time of the ICC's March announcement, Pompeo called it "breathtaking (and) reckless," threatening reprisals against court officials if they investigate US actions in Afghanistan or anywhere else.

Bensouda said the ICC determined that a reasonable basis exists to probe war crimes by US military forces and intelligence operatives in Afghanistan.

She should have said just cause exists to investigate all US wars of aggression against nations threatening no one — including US state terror, illegal sanctions, and other hostile actions against peace, constituting war by other means.

All of the above falls within the ICC's mandate.

US new millennium direct, proxy, and other types of warmaking alone have been responsible for countless millions of lost lives, vast destruction, and human misery in numerous countries.

They also inflicted enormous harm on ordinary Americans by using US discretionary income to feed the nation's military, industrial, security complex at the expense of vital homeland needs gone begging.

WikiLeaks' Afghan war diaries documented the highest of US high crimes against the nation and its people.

They represent the most comprehensive documentation of US aggression against a nation threatening no one since the Pentagon Papers.

Data came mainly from soldiers and intelligence officers, also from US embassies and other sources.

They revealed US criminality in Afghanistan, including coverups, collusion, distortion, and duplicity.

All wars are based on misinformation, disinformation, Big Lies and deception. Truth-telling would destroy pretexts for waging them.

The UN Charter explicitly states under what circumstances war by one nation against another is permitted.

Article 2(4) prohibits force or its threatened use.

Article 51 allows the "right of self-defense if an armed attack occurs against a Member…until the Security Council has taken measures to maintain international peace and security."

Justifiable self-defense is permitted, never preemptive wars for any reasons with no exceptions.

The Security Council alone is authorized to decide under what circumstances warmaking is permitted — not heads of state, legislators, or the courts anywhere.

In 1974, the UN General Assembly defined aggression to mean "the use of armed force by a State against the sovereignty, territorial integrity or political independence of another State, or in any manner inconsistent with the Charter of the United Nations."

Throughout the post-WW II period, the US has been indisputably guilty time and again — today in multiple theaters.

If all of the above doesn't demand accountability in an international tribunal, what does!

WikiLeaks lifted the fog of war by documenting US atrocities in Afghanistan and Iraq.

They both should have been honored instead of demonized, imprisoned, and brutally mistreated — for the "crime" of truth-telling about what everyone has a right to know.

In response to the ICC's announced intention to probe US war crimes in Afghanistan, Trump declared a national emergency for what he called a "threat" to the US by the ICC.

He issued an executive order, authorizing (illegal) sanctions and visa restrictions against ICC officials and their family members.

Pompeo lashed out at the court, saying the Trump regime is "determined to prevent having Americans and our friends and allies in Israel and elsewhere hauled in" for ICC prosecution."

In response to Trump regime actions, a statement by the Court said the following:

"(T)hreats and coercive actions cannot be allowed to hinder the rule of law."

"These attacks (by the Trump regime) constitute an escalation and an unacceptable attempt to interfere with the rule of law and the Court's judicial proceedings."

"An attack on the ICC also represents an attack against the interests of victims of atrocity crimes, for many of whom the Court represents the last hope for justice."

In 2002, the American Service Members' Protection Act (ASPA, aka Hague Invasion Act) was enacted to prevent US "military personnel and other (US) elected and appointed officials (from) criminal prosecution by an international court to which the United States is not party."

The measure authorizes the president to use "all means necessary and appropriate to bring about the release of any US or allied personnel being detained or imprisoned by, on behalf of, or at the request of the International Criminal Court."

The US is not a state party to the Rome Statute or ICC.

The principle of universal jurisdiction principle (UJ) holds that certain crimes are too grave to ignore, including genocide, crimes of war and against humanity.

Under UJ, nations may investigate and prosecute foreign nationals when their country of residence or origin won't, can't, or hasn't for any reason.

US Nuremberg-level high crimes of war and against humanity in Afghanistan and numerous other countries are far too grave to ignore.

It's long past time for unaccountability of its officials to end.

Holding them responsible may be the best chance to pursue world peace and stability over permanent US wars on humanity that one day may kill us all if not stopped.