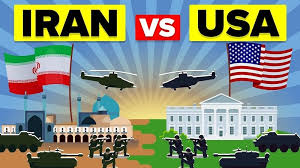 The above headlined Pompeo's hostile May 27 remarks on Iran.

Perpetuating the myth about an Iranian nuclear threat ignores what the whole world knows.

Throughout its existence since the 1950s, Iran's legitimate nuclear program had and still has no military component.

Reality has been confirmed time and again by the nuclear watchdog IAEA and US intelligence community.

In the 1950s, the US supplied the Tehran Nuclear Research Center (TNRC) with a small 5MWt research reactor (TRR), fueled by highly enriched uranium.

Under the so-called US Atoms for Peace program, Washington provided Iran with technical assistance to develop its nuclear program.

They want a permanent UN arms embargo on Iran. The current one expires in October, Pompeo roaring:

"We cannot allow the Islamic Republic of Iran to purchase conventional weapons (sic)" — its legitimate right.

Trump unlawfully abandoned the JCPOA in May 2018, abandoning as well any say over its implementation and enforcement.

His regime's aim is all about wanting Iran weakened, its economy crushed, its people ill-nourished, starved, and immiserated, its huge hydrocarbon resources looted — by whatever it takes to achieve its objectives.

It's how the US, NATO, and Israel operate, constituting an unparalleled threat to world peace and humanity's survival.

Pompeo's "Keeping the World Safe From Iran's Nuclear Program" by diabolical Trump regime policies will make the region and world less safe by wanting the JCPOA killed, along with provocatively pushing things toward possible US confrontation with Iran.

Both are key objectives of Israel and Iranophobes in Washington.

The Big Lie claim about development of nuclear weapons by Iran persists.

On Sunday, the Times of Israel said Netanyahu regime war minister Benny Gantz was told "that Tehran is just six months away from producing all the components of an atomic bomb, and two years away from assembling such a bomb (sic)."

Time and again through the years, similar disinformation and Big Lies were proliferated by Israeli and US Iranophobes.

No corroborating evidence was ever presented because none existed earlier or now.

Unlike nuclear armed and dangerous USA and Israel, Iran's nuclear program is peaceful.

According to a June 12 Foreign Policy magazine report, the Trump regime is going all out to kill the JCPOA before US November 3 presidential and congressional elections.

It wants UN nuclear related sanctions reimposed, along with a permanent arms embargo.

The publication warned of possible "irreparable damage" to the Security Council if Trump regime hardliners get their way.

Trump's pullout left the JCPOA in limbo, Russia and China firmly on board to preserve it, EU signatories Britain, France and Germany time going along with US interests even when harming their own.

It's unknown whether they'll go against Washington to save the JCPOA, what they haven't done so far, no evidence suggesting a change of policy.

Last week, EU foreign policy chief Joseph Borrell said the Trump regime pulled out of the JCPOA and has no say over demanding a permanent conventional arms embargo on Iran.

His regime threatened secondary sanctions on nations, entities, and individuals engaging in normal trade relations with Iran — demanding the world community go along with its hostile agenda.

Its "maximum pressure" on the country aims to inflict maximum pain and suffering on its people, including by denying them essentials to life, health, and well-being.

A Security Council showdown looms in the weeks ahead.

Key is whether EU JCPOA signatories will defy diabolical Trump regime anti-Iran objectives or bend to its will at the expense of regional stability and the rule of law.

The jury is very much out on which way Britain, France, Germany, and Brussels will go.

A lot depends on how things play out in the run-up to US November 3 elections.