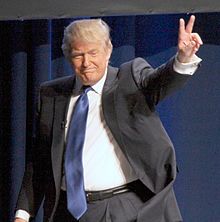 From day one in office to now, Trump breached virtually all his positive pledges to the American people.

No "transferring power from Washington, DC, and giving it back to you, the people" occurred.

No "forgotten men and women of our country…forgotten no longer, (no) stop(ing) (of) the American carnage, (no) allegiance to all Americans."

No end to US imperial wars by hot and other means that rage in multiple theaters with no prospect for ending them.

Like most others in Washington, Trump's lofty promises were empty rhetoric by a president serving privileged interests exclusively at the expense of peace, equity, justice, the rule of law, and other democratic values throughout his time in office.

Is the transformation of Trump from belligerent president, hostile toward ordinary people everywhere, to peacenik likely ahead?

Has he about-faced on wanting "a very, very strong military," wanting it more "buil(t) up" than already, wanting to more "greatly strengthen and expand" the US nuclear arsenal (to) outmatch (and) outlast" other nations by leading the nuclear arms race?

The US is a belligerent state, an imperial state, a nation from inception run by its privileged class for its own self-interest — a nation at war on invented enemies at home and abroad throughout most of its history.

No real ones existed, notably not for the past 75 years, no threats to national security from foreign nations.

Yet, with all categories included, the US spends as much or more on militarism, the Pentagon's global empire of bases, its intelligence apparatus, and wars on humanity than all other nations combined.

Throughout his time in office, Trump supported all of the above.

It's one of five US military academies that are symbolic of America's violent culture, its endless wars, its abhorrence of world peace and stability.

"There is no place on earth I would rather be than right here with all of you," DJT "trumpeted," adding:

The US "military's contributions to our society are an everlasting inspiration to us all (sic)."

It "carr(ies) on the traditions of freedom, equality, and liberty that so many gave their lives to secure (sic)."

From colonial America to the present day, US military forces massacred Native Americans "from sea to shining sea."

US troops were involved in stealing half of Mexico in the mid-19th century — today's California, Utah, Nevada, as well as parts of New Mexico, Arizona, Wyoming and Colorado.

Following the 1898 Spanish-American war based on a Big Lie, the US illegally annexed Cuba, the Philippines, Guam, Samoa, Hawaii, Haiti, the Dominican Republic, Canal Zone, Puerto Rico and other territories.

After pledging to keep the US out of WW I if reelected president, Woodrow Wilson's propaganda campaign transformed pacifist Americans into raging German haters — giving him the war he wanted.

US war on North Vietnam followed the 1964 Gulf of Tonkin false flag.

In October 1983, US forces invaded Grenada — based on a Big Lie about a threat to US medical students that didn't exist.

In 1989, Panama was invaded by US troops, former ally Manuel Noriega deposed for forgetting who's boss.

For the past 30 years, endless preemptive US wars of aggression followed.

Based on Big Lies and deception, one nation after another was raped and destroyed, millions of lives lost.

US troops led by graduates of West Point and other US military academies waged and continue to wage preemptive war on humanity.

Their training and indoctrination are all about serving US imperial interests — endless wars against nations threatening no one Washington's favored strategy.

In his 1935 book titled "War Is a Racket," General Smedley Butler (1881 - 1940), two-time congressional medal of honor recipient explained what US imperial wars are all about, saying:

"I spent 33 years and four months in active military service and during that period I spent most of my time as a high-class muscle man for Big Business, for Wall Street and the bankers."

"In short, I was a racketeer, a gangster for capitalism. I helped make Mexico and especially Tampico safe for American oil interests in 1914."

"I helped make Haiti and Cuba a decent place for the National City Bank boys to collect revenues in."

"I helped in the raping of half a dozen Central American republics for the benefit of Wall Street."

"I helped purify Nicaragua for the International Banking House of Brown Brothers in 1902-1912."

"I brought light to the Dominican Republic for the American sugar interests in 1916."

"I helped make Honduras right for the American fruit companies in 1903. In China in 1927, I helped see to it that Standard Oil went on its way unmolested."

"Looking back on it, I might have given Al Capone a few hints. The best he could do was to operate his racket in three districts. I operated on three continents."

For the rest of his term and if reelected, will Trump focus on peacemaking over "endless wars (by the US) policeman of the world?"

Was saying "(w)e are ending the era of endless wars…(It's) no longer the policy of US forces to solve ancient conflicts in faraway lands that many people have not even heard of" an unprecedented change of longstanding US policy?

Not a day of world peace and stability existed throughout his tenure, the same true for most of his predecessors.

The US ruling class considers peace, stability, and adherence to the rule of law anathema to its imperial aims for unchallenged dominance of planet earth, its resources, and populations.

What Trump called "defending America's vital interests" is all about waging war on humanity by hot and other means at home and abroad so privileged US interests can benefit at the expense of vitally needed peace, equity and social justice.

Changing longstanding US policy won't ever come from sitting presidents, legislators, the courts, or so-called elections that assure continuity when held.

US ruling authorities yield nothing without being pushed.

Positive change can only come from sustained nonviolent activism in the streets nationwide, not quitting until achieved.

It's the only way possible for government serving everyone equitably, not just for the privileged few like now.

Nothing else can work, not now or ever.