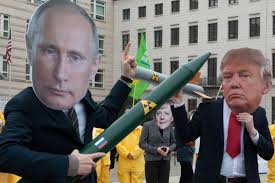 After abandoning the INF Treaty, JCPOA, Open Skies Treaty, and other international agreements that conflict with its imperial aims, New START appears next on the Trump regime's chopping block.

It's the only arms control treaty remaining between Russia and the US.

Trump and hardliners surrounding him want the option of using nuclear weapons against US adversaries preserved, notably tactical nukes.

New START expires on February 5, 2021. If not renewed, it's gone. Geopolitical know-nothing Trump falsely called it a "bad deal."

He never read it or knows anything more about it than Big Lies hardliners like Pompeo fed him.

Moscow "attaches great significance to arms control and is primarily guided by responsibility for the destinies of the world and maintaining stability and security," adding:

"In the current situation, we consider dialogue with the United States on the extension of the New START Treaty to be extremely important for preventing further destruction of international agreements in this field."

Last December, Putin expressed Russia's willingness to extend New START with no preconditions or changes to a treaty that stood the test of time for nearly a decade.

The Trump regime remains unreceptive except on its one-sided terms.

MZ: "US officials are trying to link the extension of the treaty with issues that have nothing to do with its subject and content."

"(T)hey mention including restrictive measures as regards China's military programs, something to which Beijing strongly objects."

They "want to wreck the treaty and at the same time save face and shift the blame to Russia and China."

What Moscow and most world community member states seek, the US, NATO and Israel reject.

As things now stand, Trump will add New START to his regime's growing list of abandoned international agreements if reelected in November.

The treaty limits deployed strategic nuclear warheads and bombs to 1,550, about 30% fewer than the SORT limit, nearly 75% below START I's 6,000 allowed.

Deployed and non-deployed ICBM launchers, SLBM launchers, and bombers are limited to 800 — about 50% fewer than START I permitted.

They must be located away from deployment sites and appropriately labeled for easy identification.

On-site monitoring and verification were agreed on to assure both countries remain in compliance with their obligations.

If New START isn't renewed and expires next February, limits on the world's largest nuclear arsenals no longer will exist for the first time in nearly half a century.

New millennium US policy asserts its preemptive right to unilaterally declare and wage future wars with first-strike nuclear weapons — including against non-nuclear nations.

What the world needs now is sanity at a time when it's absent in Washington, risking war with nukes able to kill us all if used in enough numbers.

Commenting on Trump's remark about withdrawing thousands of US troops from Germany, shifting at least some to Poland, MZ said the following:

"(W)e would welcome any steps by Washington to reduce its military presence in Europe."

"Such steps would certainly help ease the confrontation potential and military-political tensions in the Euro-Atlantic region."

"Moscow has always said that the preservation of a large US troop contingent in Germany after the country's unification in 1990 is a Cold War relic."

No Russian threat to European countries or any others exists.

The hostile presence of US forces worldwide threatens peace wherever they're deployed.

Time and again, possible or actual withdrawal of US forces was followed by redeployments for warmaking and other hostile actions.

If increasing numbers of Pentagon troops are sent to Poland, a nation bordering Russia, regional tensions will be heightened, the threat of confrontation increased.

MZ: If the Trump regime actually withdraws forces from Germany, its nukes in the country should go with them.

"This is particularly important since the Americans continue to actively polish practical methods of their potential use during joint nuclear missions' with non-nuclear NATO members, which is an obvious violation of the Nuclear Non-Proliferation Treaty."

MZ noted the unacceptable document by GOP hardliners that calls for tougher US sanctions on Russia, China and Iran.

Explaining the illegality of all unilaterally imposed sanctions by one nation on others, MZ stressed that piling on more by the Trump regime would be all about pressuring the above countries "to follow the line of American foreign policy," adding:

US hardliners "shameless(ly) call (for) designat(ing) Russia as a state sponsor of terrorism."

"(T)his is sheer impertinence. We have long been accustomed to such statements uttered by individual representatives of the American political class trying to ride the wave of Russophobia and boost awareness of their own brand, and we have ceased to take them seriously or react."

Ignored are trillions of dollars of investments in the country by corporate America.

Business prefers stability. Hostile US relations toward China, including unacceptable tariffs on its goods, hits their bottom line and/or what US consumers pay.

The US under both right wings of the one-party state seeks new ways to increase its status as a pariah state.

It's declining on the world stage because it has no worst enemy than itself.