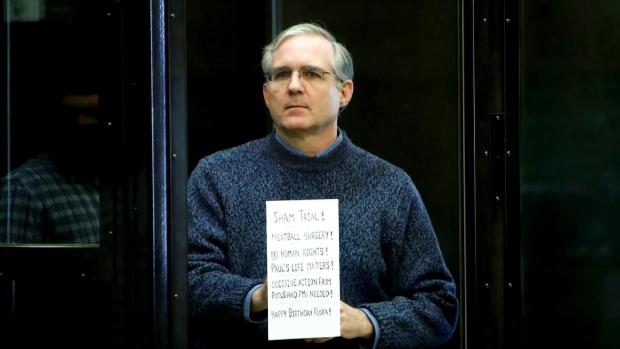 On Monday, a Moscow court sentenced US spy Paul Whelan to 16 years imprisonment.

Charged with espionage, he was caught red-handed in December 2018 and arrested after accepting a flash drive with sensitive information from an undercover Russian Federal Security Service (FSB) official.

Former US marine Whelan holds citizenship in four countries — Britain, Ireland, Canada and the US.

He was a BorgWarner security chief for its Michigan-based auto components company.

Russia's FSB accused him of spying on the country, his main reason for being there.

On May 14, Moscow's First Court of Appeals dismissed his complaint, claiming the case against him was fabricated.

A criminal case against him was opened under Article 276 of Russia's Criminal Code. He faced  potential imprisonment of up to 20 years.

Former FSB official Jan Neumann, now living in the US, said the agency "never busts anyone on espionage charges if there's no espionage case, especially not foreign citizens," adding:

Whelan's arrest means FSB operatives "followed (him) and saw every step of the way and had enough evidence."

"Each espionage case is a very high-profile investigation. Every step is under control of top-level officials, and everyone is very sensitive about every detail and aspect of such an operation."

As for the timing of Whelan's arrest, the FSB "wait(ed) for a perfect moment…something an alleged spy can't deny."

A BorgWarner statement said he "oversee(s) security at our facilities in Auburn Hills, Michigan and at other company locations around the world."

Company spokeswoman Kathy Graham said BW has no facilities in Russia, so Whelan's trip to the country and earlier ones had nothing to do with his employer.

In 2019, Vladimir Putin said Russian security services discovered and shut down espionage by 53 Russian nationals and 386 foreign agents in 2016," perhaps similar numbers in other years.

Putin stressed that arrests aren't made "to exchange them for someone else later on."

On Monday, Pompeo falsely accused Russia of trying him in secret "with secret evidence, and without appropriate allowances for defense witnesses (sic)," adding:

"(D)uring his detention…his life (was) at risk by ignoring his long-standing medical condition and ke(eping) him isolated from family and friends (sic)."

Last year, Russian Foreign Ministry spokeswoman Maria Zakharova said Moscow offered to arrange for representatives of nations he has citizenship in to visit him if he wishes, adding:

"(O)nly representatives from the United States have visited (him) upon a request. The US side has not contacted the Russian side on that matter any more."

"Other countries (he) has been confirmed to be a citizen of have asked for a permission to visit him."

"If (he) says that he has no objections against such visits, that he needs them, that he wants them, they will be organized when convenient for all the sides."

Zakharova noted that his "spying activities have been properly documented, and, remarkably, (they've) never been refuted by US officials during our working contacts."

Unlike Russian political prisoners in the US, Whelan has been properly treated according to international law, including medical care when needed.

They can't get much worse than already short of preemptive US war on its heartland and/or other targets.

On the issue of a possible prisoner exchange, Russian Deputy Foreign Minister Sergey Ryabkov said "we have offered options many times."

"We have said which US citizens serving a sentence in the Russian Federation could be exchanged for Russian citizens" unjustly behind bars in the US and mistreated as political prisoners.

Maria Butina was the most recent example. In July 2918, she was arrested and falsely charged with acting as a Russian foreign agent.

She was a student in the US unconnected to Russia's government, no evidence suggesting otherwise, accusations against her fabricated.

Russia's Foreign Ministry slammed what it called a US campaign to "stoke Russophobic hysteria."

During detention from July 2018 - October 2019, she endured brutalizing physical and emotional mistreatment, amounting to torture.

Under a plea bargain deal despite guilty of no wrongdoing, she was released and allowed to return to Russia.

Home and safe, she was able to speak freely about her ordeal for the first time. Other Russian nationals mistreated in similar ways were and remain less fortunate.

A commercial pilot and businessman, he endured "extreme government misconduct," he said, including "torture, brutal and inhumane treatment in detention."

Russian national Viktor Bout was and remains victimized like Yaroshenko, arrested and imprisoned on false charges.

Unjustly called a "merchant of death," he ran a legitimate air cargo business. Yet he's wrongfully imprisoned and mistreated, including by denial of proper medical care.

Russia's embassy in Washington complained about the "endemic" mistreatment of Russian nationals in US prisons – for political reasons, for the "crime" of being a national of country America considers an adversary.

Moscow should demand release of them all in return for convicted spy Whelan and perhaps other legitimate US criminals in Russian prisons.

His arrest, prosecution, conviction, and imprisonment had nothing to do with swapping him for Russian nationals behind bars in the US.

"We never do things like that. I'll say it again. He was caught red-handed."

Unlike harshly treated Russian political prisoners in the US, Whelan and other foreign nationals incarcerated in Russia are treated fairly.

In response to UK officials expressing concern about Whelan's well-being, Lavrov said no consular requests to see him were received.

If its foreign office or consular officials ask to meet with Whelan, Russia "will act in accordance the obligations enshrined in the Convention (on Consular Relations) and diplomatic courtesy."

Russia will fulfill its obligations in dealings with all other countries — polar opposite how the US, Britain, and their imperial allies operate.

Did Japan Just Warn the US of an Impending Joint Attack From China and Russia?