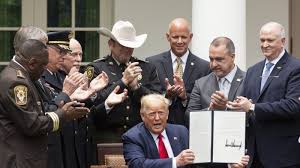 Police aren't the problem in the US. They operate as trained and ordered by higher authorities.

They serve and protect privileged interests at the expense of beneficial social change — the real systemic issue vital to address getting no attention, including by establishment media.

Institutionalized racism, inequality, and injustice reflect what America has been all about from inception — ordinary people abused and otherwise exploited to benefit the nation's wealthy and powerful.

Legislation, Supreme Court rulings, and presidential executive orders are meaningless without transforming today's unacceptable system into governance of, by, and for everyone equitably.

It won't come from elections that assure continuity when held — nor from promises by the nation's executive and congressional leadership.

It's only possible by grassroots revolutionary activism that requires longterm struggle, staying the course, not quitting until peace, equity and justice are achieved.

On Tuesday, Trump signed a so-called Executive Order on Safe Policing for Safe Communities that amounted to much ado about nothing, a symbolic gesture, nothing more.

Flanked by cops and others for the occasion, the EO made no mention of systemic inequity, injustice, police violence, or enforcement of the rule of law to serve and protect everyone, especially society's most vulnerable.

The EO is a smokescreen for continuity, ignoring vitally needed systemic change — what Trump, the vast majority in Congress, the courts, and monied interests abhor and won't tolerate unless pushed by sustained longterm activism nationwide.

What Trump called "the brave men and women in blue who police our streets and keep us safe" exclusively serve as a praetorian guard for the nation's privileged class at the expense of most others.

Trump's EO and whatever congressional legislation that emerges, if any, will amount to no more than tinkering around the edges cosmetic changes — leaving structural racism, inequity and injustice in place.

From inception, the US has been and remains a culture of violence — notably throughout the post-WW II period by waging wars on humanity at home and abroad without letup.

Legislation, EOs, judicial rulings, and other actions at the federal, state, and local levels did nothing to transform the US into a just society.

Police violence and other forms of brutality reflect fundamental US societal inequities that need addressing and correcting.

There's nothing in prospect legislatively or otherwise for systemic change.

Without it, dirty business as usual will continue as always — no matter which right wing of the one-party state is in power, no matter what laws are enacted or EO's ceremonially signed.