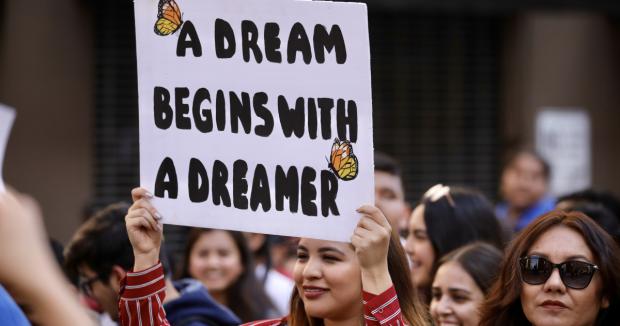 US Supreme Court Rules for Dreamers

From inception, "America the beautiful" was and remains pure fantasy.

Throughout US history, its "lamp beside the golden door (alone welcomed) huddled masses yearning to breathe free" of the "right" race, ethnicity, and religion.

The welcome mat for people of color, the "wrong" nationality, and "wrong" religion was never out — other than for indentured servitude to corporate America and its privileged class.

So-called "Dreamers" were earlier estimated to number around 1.7 million, undocumented immigrants entering America before age-16 prior to June 2007.

Eligibility to stay in the US requires they be in school, have graduated from high school, or received an honorable discharge from the military.

Anyone convicted of a felony or serious misdemeanor is ineligible. So are individuals considered a threat to national security.

DACA excludes a path to citizenship and eligibility for federal welfare or student aid.

Lawyers for DACA's continuation argued that ending the program would cause "serious, irreparable harm" to affected individuals, adding:

"DACA covers a class of immigrants whose presence, seemingly all agree, pose the least, if any, threat and allows them to sign up for honest labor on the condition of continued good behavior."

"This has become an important program for DACA recipients and their families, for the employers who hire them, for our tax treasuries, and for our economy."

Throughout his tenure, Trump's immigration policy has been and remains all about keeping individuals from the "wrong" countries out of the US.

In October 2017, the ACLU sued "to hold the (Trump regime accountable to earlier) promises it made and ensure that DACA provides protection from deportation for however long the program exists, adding:

No one should "be stripped of a benefit as important as DACA without basic due process protections."

"The Trump (regime's) arbitrary decision to end the program makes it clear that we cannot leave these young people's fate to whoever happens to be sitting in the White House."

On Thursday, the US Supreme Court ruled by a 5 - 4 majority against Trump's intention to end DACA.

Writing for the dissenters, Thomas called the ruling political, not legal.

Trump lashed out at the ruling in typical Trumpian fashion, tweeting:

"These horrible & politically charged decisions coming out of the Supreme Court are shotgun blasts into the face of people that are proud to call themselves Republicans or Conservatives (sic)."

"We need more Justices or we will lose our 2nd. Amendment & everything else."

"Do you get the impression that the Supreme Court doesn't like me?"

Specifically, Roberts said the following in ruling against Trump on DACA:

The Trump regime "failed to consider the conspicuous issues of whether to retain forbearance and what if anything to do about the hardship to DACA recipients," adding:

"That…failure raises doubts about whether (it) appreciated the scope of its discretion or exercised that discretion in a reasonable manner."

"We (Court justices) do not decide whether DACA or its rescission are sound policies."

"The wisdom of those decisions is none of our concern."

"Here we address only whether the (Trump regime) complied with (APA) procedural requirements that insist on 'a reasoned explanation for its action.' "

The decision to end DACA was "arbitrary and capricious."

At the same time, all nine justices agreed that the executive branch has authority to rescind DACA on its own — as long as no federal law is breached.

Thursday's Supreme Court ruling by no means resolves this issue.

It's unlikely in an election year at a time of Trump's declining popularity, economic collapse, increasing COVID-19 outbreaks in many states, and unprecedented unemployment.

From now to November, he'll no doubt focus mainly on improving his reelection chances.

According to immigration law expert/Law Professor Stephen Yale-Loehr, "(i)t's not remotely possible (for Trump to challenge Thursday's Supreme Court ruling) before the election."

"But if (he's) reelected, he almost certainly will try again" to abolish DACA.

Ahead of Thursday's ruling, around 200 major US corporations filed amicus briefs in support of DACA — with no altruistic motives in mind, concerned only about the availability of cheap labor sources to exploit.

"The highest court in our land saw through the Trump (regime's) illegal, baseless excuses."

Separately, an amicus brief by attorneys in support of Dreamers explained that 27,000 of their numbers are vitally needed healthcare workers.

Another 200 are practicing physicians, medical residents and students.

Terminating DACA would be "catastrophic" to efforts involved in containing and treating outbreaks, they argued.