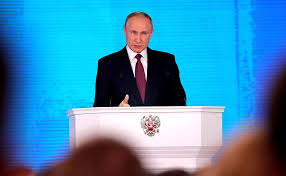 In a lengthy op-ed on the Kremlin website, published by the US National Interest magazine, Vladimir Putin stressed the urgency of international cooperation to deal with major issues vital to address and resolve.

Ahead of Moscow's delayed Victory Day commemoration of Nazi Germany's defeat on the 75th anniversary of Europe's liberation from its scourge, he called for addressing global public health and economic crisis conditions, saying the following:

It's vital for world powers America, Britain, China, France, Germany and Russia to work cooperatively to "overcom(e) the economic crisis caused by the coronavirus pandemic," adding:

"Our countries are taking unprecedented measures to protect the health and lives of people and to support citizens who have found themselves in difficult living situations."

"Our ability to work together and in concert, as real partners, will show how severe the impact of the pandemic will be, and how quickly the global economy will emerge from the recession."

It's important "to discuss steps to develop collective principles in world affairs."

"To speak frankly about the issues of preserving peace, strengthening global and regional security, strategic arms control, as well as joint efforts in countering terrorism, extremism and other major challenges and threats."

"There can be no doubt that the summit of Russia, China, France, the United States, and the UK can play an important role in finding common answers to modern challenges and threats."

Leaders of these countries can and should "demonstrate a common commitment to the spirit of alliance, to those high humanist ideals and values for which our fathers and grandfathers were fighting shoulder to shoulder."

Putin is a preeminent world leader, a key proponent of world peace, stability, and mutual cooperation among all nations.

His well-intended op-ed flies in the face of US-led NATO's rage for global dominance — endless wars by hot and other means Washington's favored strategies.

Britain, France and Germany operate as virtual US colonies on most issues, including hostility toward its adversaries, notably Russia since its 1917 revolution, continuing after WW II ended, and after the Soviet Union dissolved, especially since Putin succeeded pro-Western puppet Boris Yeltsin.

US hostility toward Russia is all about its sovereign independence, unwillingness to bend to its interests, opposition to its imperial rage, wanting a new era of world peace and stability, notably by abolishing endless imperial wars of aggression against invented enemies.

US rage for unchallenged global dominance is hard-wired, longstanding, and unbending.

Russia is a prime target for regime change because it's independent of US control, rich in resources Washington's ruling class wants exploited, and the main obstacle to the US aim for unchallenged global dominance, along with China.

The so-called 1914-18 war to end all wars was prelude for much worse to come. In 1928, Kellogg-Briand policy renounced aggressive wars in vain.

"We the Peoples of the United Nations Determined to save succeeding generations from the scourge of war, which twice in our lifetime has brought untold sorrow to mankind…"

Washington, its key NATO partners and Israel wage endless wars of aggression in multiple theaters with no prospect for resolution anywhere.

More wars are virtually certain,  possibly with thermonuclear weapons able to end life on earth if used in enough numbers.

Novelist Kurt Vonnegut once said "(w)e doomed to repeat the past no matter what."

History bears him out. New wars follow earlier ones, an endless cycle of mass slaughter, vast destruction, and human misery.

There's no end of it in prospect because US-dominated NATO and Israel are addicted to smashing invented adversaries to advance their own interests.

Transformational change can only come internally from popular revolution, no other way likely or possible.

What never happened before has no chance in nations with longstanding cultures of violence and rage to dominate like the US.

Throughout its history, it's been at war internally and abroad against invented enemies, including the misnamed "good war."

Howard Zinn, a US warplane bombardier against the Nazis, said after visiting Royan, France after the war and speaking to survivors of bombings he was part of that he rethought what he "once accepted without question, the absolute morality of the war against fascism."

He realized that the notion of just wars is pure fantasy, civilians always harmed most.

Peacemaking efforts could prevent wars, what militarists and merchants of death in the US and West strongly oppose.

Zinn was onboard one of 1,200 US bombers involved in dropping napalm on Royan, its first use in Europe.

Only after WW II ended did he learn about the devastating effects it had on civilian men, women, children, the elderly and infirm.

It's what devastating warfare is all about — what only belligerents and war profiteers relish, conflicts begetting more of the same, an endless cycle of perpetual wars that never should be waged for any reasons.

War is a crime, an atrocity against humanity.

After learning firsthand of vast destruction and slaughter he was part of miles high in the sky, Zinn said the following:

"War brutalizes everyone involved, begets a fanaticism in which the original moral factor (like fighting fascism) is buried at the bottom of a heap of atrocities committed by all sides," adding:

"While there are certainly vicious enemies of liberty and human rights in the world, war itself is the most vicious of" all.

No justification ever exists for "the massive, indiscriminate slaughter of modern warfare."

Wars are never the answer. Yet they've always been the American way from inception to now.

As long as the US remains a warrior state, a belligerent against humanity at home and abroad, the notion of international cooperation to address pressing world issues, proposed by Vladimir Putin, is rejected out of hand.

Throughout the post-WW II period, the US has been largely hostile to resolving differences with other nations diplomatically.

Shortly before passing away in January 2010, Zinn said the following:

"Wherever any kind of injustice has been overturned, it's been because people acted as citizens, and not as politicians," adding:

"They didn't just moan. They worked. They acted. They organized. They rioted (at times) to bring their situation to the attention of people in power."

"And that's what we have to do today."

Diplomatic outreach to hegemons like the US accomplishes nothing every time tried.

Pushing is the only way possible to transform the world's leading purveyor of state-sponsored terrorism USA into a nation fostering world peace, stability, and governance serving all its people equitably.

In the nuclear age, failure to beat swords into plowshares may doom us all.

As long as these weapons exist and US war on humanity rages endlessly, the risk of destroying planet earth and all its life forms remains ominously high.